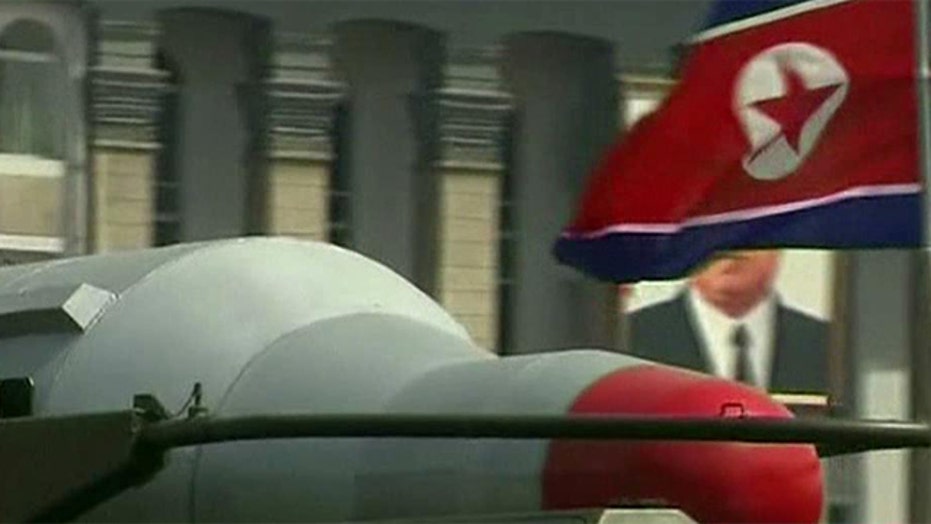 How close is North Korea from launching its missiles?

Greg Palkot with the latest information

Girls in red and pink jackets skipped along streets festooned with celebratory banners and flags and parents pushed strollers with babies bundled up against the spring chill as residents of the isolated, impoverished nation began observing a three-day holiday.

There was no sense of panic in the North Korean capital, where very few locals have access to international broadcasts and foreign newspaper headlines speculating about an imminent missile launch and detailing the international diplomacy under way to try to rein Pyongyang in, including a swing through the region by U.S. Secretary of State John Kerry to try to tamp down emotions and coordinate Washington's response with Beijing, North Korea's most important ally.

Foreign governments have been struggling to assess how seriously to take North Korea's recent torrent of rhetoric -- including warnings of possible nuclear war -- as it expresses its anger over continuing U.S.-South Korea military maneuvers just across the border. Officials in South Korea, the United States and Japan say intelligence indicates that North Korean officials, fresh off an underground nuclear test in February, are ready to launch a medium-range missile.

North Korea's own media gave little indication Monday of how high the tensions are.

The Rodong Sinmun, the Workers' Party newspaper, featured photos and coverage of current leader Kim Jong Un's overnight visit to the Kumsusan mausoleum to pay respects to his grandfather. There was only one line at the end of the article vowing to bring down the "robber-like U.S. imperalists."

Kim Jong Un's renovation of the memorial palace that once served as his grandfather's presidential offices was opened to the public on Monday, the vast cement plaza replaced by fountains, park benches, trellises and tulips. Stretches of green lawn were marked by small signs indicating which businesses -- including the Foreign Trade Bank recently added to a U.S. Treasury blacklist -- and government agencies donated funds to help pay for the landscaping.

Braving the cold, gray weather, people lined up in droves to lay bouquets of fake flowers at the bronze statues of Kim and his son, late leader Kim Jong Il, in downtown Pyongyang, as they do for every major holiday in the highly militarized country, where loyalty to the Kims and to the state are drummed in citizens from an early age. They queued at roadside snack stands for rations of peanuts, a holiday tradition. Cheers and screams from a soccer match filled the air.

"Although the situation is tense, people have got bright faces and are very happy," said Han Kyong Sim, a drink stand worker.

Monday marked the official start of the new year according to North Korea's "juche" calendar, which begins with the day of Kim Il Sung's birth in 1912. But unlike last year, the centennial of his birthday, there are no big parades in store this week, and North Koreans were planning to use it as a day to catch up with friends and family.

But while there was almost no sense of crisis in Pyongyang, North Korea's official posture toward the outside appears to be as hardline as ever.

On Sunday, it rejected South Korea's proposal to resolve tensions through dialogue. North Korea said it has no intention of talking with Seoul unless it abandons what it called the rival South's confrontational posture. South Korea's unification minister, Kim Hung-suk, called that response `'very regrettable" on Monday, though other South Korean officials made it clear that the South still remains open to dialogue.

A top North Korean leader, Kim Yong Nam, president of the Presidium of the Supreme People's Assembly, also told a gathering of high officials Sunday that the North must bolster its nuclear arsenal further and "wage a stronger all-out action with the U.S. to cope with the prevailing wartime situation," according to footage from the North's state TV.

South Korea's defense minister, Kim Kwan-jin, told a parliamentary committee in Seoul on Monday that North Korea remains ready to launch a missile from its east coast, though he declined to disclose how he got the information. He said that if the North fires the missile, it would time the launch to maximize the political and diplomatic effects. But he said he could not pinpoint a date.

He also said there's been no indication that the North would launch attacks against South Korea. But he said that based the rhetoric out of Pyongyang the North could still stage limited attacks depending on the political situation on the peninsula. He said South Korea will strongly deal with any provocations, but he urged the North to engage in dialogue.

Kerry, during his trip, has warned North Korea not to conduct a missile test, saying it will be an act of provocation that "will raise people's temperatures" and further isolate the country and its people. In Tokyo Sunday after talks in Beijing the day before, Kerry met with Japan's foreign minister, Fumio Kishida, and opened the door to direct talks with North Korea if certain conditions are met. Kerry said the U.S. was "prepared to reach out" to North Korea, but that Pyongyang must first lower tensions and honor previous agreements.

North Korea's statements are commonly marked by alarming hyperbole and it has not ordered the small number of foreigners who are here to leave. Embassies in Pyongyang refused to comment on the suggestion they consider evacuating, referring questions back to their home countries. But there were no reports that any diplomatic missions had actually left.

North Korea has also taken the unusual move of pulling workers from the Kaesong factory complex on its side of the Demilitarized Zone, the last remaining symbols of inter-Korean rapprochement. The complex also was a key earner of foreign currency for cash-strapped North Korea, where -- according to the World Food Program -- two-thirds of the population struggles with food shortages.

North Korea has issued no specific warnings to ships and aircraft that a missile test is imminent, and is also continuing efforts to increase tourism.