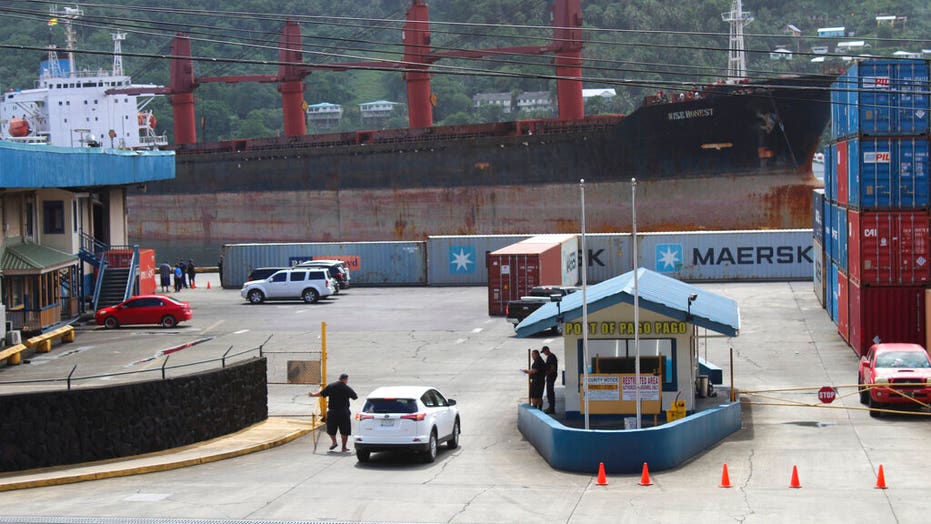 PAGO PAGO, American Samoa – A North Korean cargo ship seized by the U.S. because of suspicion it was used to violate international sanctions arrived at the capital of this American territory, where it will undergo inspections.

The Wise Honest was slowly towed to the port of Pago Pago during a cloudy Saturday morning and docked at the main docking section of the port that afternoon.

The trip from Indonesia took about three weeks and American Samoa, in the South Pacific, was chosen because of "its central strategic location," U.S. Coast Guard public affairs officer Amanda Wyrick said.

"We also have a good strong relationship and partnership with the American Samoan government," Wyrick said. "With that being said, we also already have the resources that are able to ensure the security of the vessel but most importantly the Port of Pago Pago."

A view from the top of a two story building in Fagatogo village overlooking the Port of Pago Pago, as the North Korean cargo ship, Wise Honest, docks at the main docking section of Pago Pago Harbor, Saturday, May 11, 2019, in Pago Pago, American Samoa. (AP Photo/Fili Sagapolutele)

The ship was detained in April 2018 as it traveled toward Indonesia. Justice Department officials announced Thursday the U.S. had seized the ship.

"I do know that Justice Department is going to do the investigation as fast as they can," Wyrick added.

She said she didn't have the exact number of U.S. Coast Guard personnel or people from other federal agencies who have traveled to American Samoa for the investigation.

"We have a marine and safety security team here from Honolulu," Wyrick said. "We're conducting random patrols, also conducting inspection of the vessel and the Port of Pago Pago, keep an eye on things such as security breaches or vandalization of the ship itself."

Trump signals North Korea may not be ready to discuss denuclearization

Officials are also making sure the port is protected, she said.

"We especially in the Coast Guard, we understand the importance of the port. It's a lifeline in getting goods to the islands," Wyrick said. "So we want to make sure that we're doing everything we can, to make sure that there's absolutely no disruption to the flow of commerce coming in and out."

The U.S. government dispatched an inspection team to the ship before it docked in Pago Pago, she said. Wyrick noted there was an inspection conducted before leaving Indonesia and, because the ship has been at sea for three weeks, "it's subject to the elements."

"The inspection of the ship before entering the harbor is to make sure the structure integrity of the boat is still intact. In that way, once we get the thumb's up, and the green light, and the inspectors deem it safe, then it will enter the port," Wyrick said.

U.S. officials made the announcement of the ship's seizure hours after North Korea fired two suspected short-range missiles toward the sea, the second weapons launch in five days and a possible signal that stalled talks over its nuclear weapons program are in trouble.