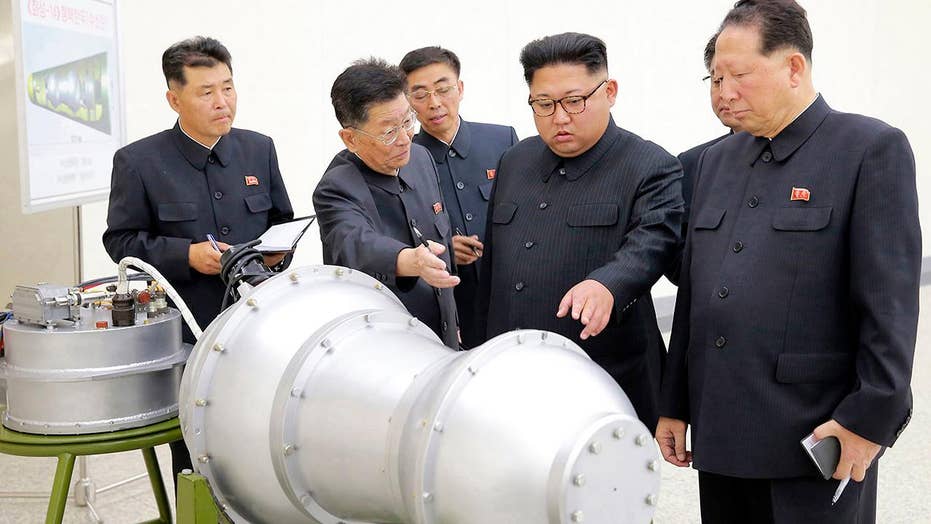 Small group of hand-picked journalists, but not inspectors, invited to witness the closure of the Punggye-ri test site; Greg Palkot reports from Seoul.

North Korea invited a select group of foreign journalists, but excluded eight South Koreans, to the scheduled nuclear test site closing “ceremony” this week as the regime continues to lash out and accuse the South and United States of “saber-rattling” for continuing military drills.

"We tried to convey the list through the Panmunjom communication channel at 9 a.m. today, but the North declined to accept it," a South Korean unification ministry official told Yonhap News Agency.

A group of journalists from Britain, Russia, China and the U.S. arrived in North Korea’s “shiny new” Wonsan airport after taking a charter flight from Beijing. Despite the list rejection, the South Korean journalists still traveled to Beijing on Monday — but were reportedly left stranded in the Chinese city after they weren’t granted visas.

Foreign journalists at Beijing airport to board the flight to North Korea. (AP)

"We stepped out from this airport and it's eerily quiet,” Sky News correspondent Tom Cheshire said.

The journalists will take a 12-hour train ride up to the mountains, followed by a four-hour trip on a bus. They will finally reach Punggye-ri after a two-hour hike, Sky News reported. North Korean officials also confiscated the journalists and crew’s satellite phones.

North Korea announced in mid-May it will be holding a “ceremony” to dismantle the site where the regime conducted six of its nuclear tests. North Korea’s Foreign Ministry said that all the tunnels at the country’s northeastern testing ground will be destroyed by explosion and that observation and research facilities and ground-based testing units will also be removed.

Many analysts, however, said the dismantling of the nuclear site is mainly just a gesture.

The event follows Kim Jong Un’s promise made during the summit with South Korean President Moon Jae-in last month. Kim is also expected to meet President Trump on June 12 in Singapore, but those plans may be tossed.

North Korea recently lashed out at the South and U.S. over ongoing joint military exercises. The regime abruptly canceled its recent meeting with South Korea and cut off high-level contact with Seoul. It also threatened to pull out of the summit with Trump.

US SENDS POWERFUL WARSHIP TO JAPAN AMID LOOMING TRUMP-KIM SUMMIT

On Tuesday, a commentary published in Minju Joson, one of North Korea’s four main daily newspapers, reiterated the country’s stance on the military drills.

"Dialogue and saber-rattling can never go together," the commentary stated.

Before and after photos show differences at the Punggye-ri nuclear test site. (Airbus Defense And Space/38 North)

"There are some arguments describing the improvement of the situation on the Korean Peninsula as 'result of hard-line diplomacy' of the U.S. and 'result of sustained pressure,'" the state-run Korean Central News Agency also said. "It seriously chills the atmosphere of the DPRK-U.S. dialogue and is of no help to the development of the situation."

Another article lashed out at South Korean authorities for allowing defectors to send anti-North Korea leaflets across their border.

Vice President Mike Pence told Fox News’ “The Story” there’s “no question” Trump is willing to walk away from the negotiation table if his summit with Kim goes awry.