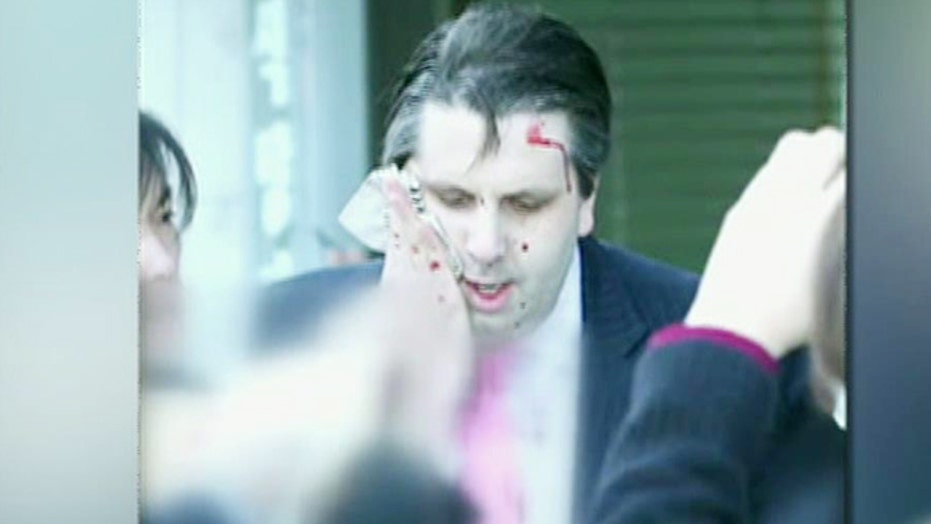 US ambassador to South Korea sliced by man with razor

The U.S. ambassador to South Korea was slashed by a man screaming demands for Korean unification Thursday morning in Seoul, and was hospitalized with wounds to his face and wrist in an attack that North Korea called "a deserved punishment on war maniac U.S."

About nine hours after the attack, Mark W. Lippert posted on his Twitter account that he was "doing well and in great spirits" and would be back "ASAP" to advance the U.S.-South Korean alliance.

Media images showed a stunned-looking Lippert examining his blood-covered left hand and holding his right hand over a cut on the right side of his face, his pink tie splattered with blood. The attack occurred at a performing arts center in downtown Seoul where Lippert was about to give a lecture on the prospects for peace on the divided Korean peninsula.

The U.S. Embassy said Lippert was in stable condition after surgery at a Seoul hospital.

In a televised briefing, Chung Nam-sik of the Severance Hospital said 80 stitches were needed to close the facial wound, which was just over 4 inches long and just over 1 inch deep. He added the cut did not affect Lippert's nerves or salivary gland.

Chung said the knife also penetrated through Lippert's left arm and damaged the nerves connected to his pinkie and tendons connected to his thumb. Lippert will need to be treated at the hospital for the next three or four days and may experience sensory problems in his left hand for several months, Chung said.

North Korea's state-controlled media later crowed that "knife slashes of justice" were "a deserved punishment on war maniac U.S." and reflected the South Korean people's protests against the U.S. for driving the Korean Peninsula to the brink of war because of the joint military drills.

YTN TV reported that the suspect — identified by police as 55-year-old Kim Ki-jong — screamed during the attack, "South and North Korea should be reunified." The comments touch on a deep political divide in South Korea over the still-fresh legacy of the 1950-53 Korean War, which is still technically ongoing because it ended in an armistice, not a peace treaty. Some South Koreans blame the presence of 28,500 U.S. troops stationed in the South as a deterrent to the North for the continuing split of the Korean Peninsula along the world's most heavily armed border -- a view North Korea's propaganda machine regularly pushes in state media.

Witnesses said the attack happened suddenly. A knife-wielding man ran screaming up to Lippert as soup was being served for the breakfast meeting and began slashing, said Kim Young-man, spokesman for the group hosting the breakfast, the Korean Council for Reconciliation and Cooperation. A separate, unidentified witness told local media that as Lippert stood up for a handshake, the suspect wrestled the ambassador to the ground and slashed him with a knife.

Yonhap TV showed men in suits and ties piled on top of the attacker, who was dressed in a modern version of the traditional Korean hanbok, and Lippert later being rushed to a police car with a handkerchief pressed to his cheek. The suspect also shouted anti-war slogans after he was detained, police said, later adding that the knife was around 10 inches long.

U.S. ambassadors have security details, but their size largely depends on the threat level of the post. Seoul is not considered to be a particularly high threat post despite its proximity to the North Korean border. It's not clear how many guards Lippert had, but they would have been fewer than the ambassadors in most of the Mideast.

Seoul's Foreign Ministry said it was the first time a foreign ambassador stationed in modern South Korea had been injured in a violent attack.

Kim is well-known among police and activists as one of a hard-core group of protesters willing to use violence to highlight their causes. Such protesters often speak of their actions in terms of a war, of a struggle to the death.

Kim told police that he attacked Lippert to protest U.S.-South Korean military drills that started Monday — exercises that the North has long maintained are preparations for an invasion. Kim said the drills, which Seoul and Washington say are purely defensive, ruined efforts for reconciliation between the two Koreas, officials at Seoul's Jongno police station said in a televised briefing.

Police didn't consider the possibility that Kim, who has ties to the Korean Council for Reconciliation and Cooperation, which hosted the breakfast meeting where Lippert was attacked, would show up for the event, according to a Seoul police official who didn't want to be named, citing office rules.

Lippert became ambassador last October and has been a regular presence on social media and in speeches and presentations during his time in Seoul. His wife gave birth here and the couple gave their son a Korean middle name.

Lippert has previously held senior positions in the Department of Defense between 2012 and 2014 before being nominated to the post. Lippert was formerly the U.S. assistant secretary of defense for Asian affairs and a foreign policy aide to President Obama when Obama was a U.S. senator.

A police official, speaking on condition of anonymity because the investigation was still happening, said the suspect in 2010 threw a piece of concrete at the Japanese ambassador in Seoul. South Korean media reported that Kim Ki-jong was later sentenced to a three-year suspended prison term over the attack. Kim, who was protesting Japan's claim to small disputed islands that are occupied by South Korea, missed the ambassador with the concrete and hit his secretary instead, the reports said.

Kim also reportedly tried to set himself on fire with gasoline while protesting in front of the presidential Blue House in October 2007. He was demanding a government investigation into an alleged 1988 rape in Kim's office, according to news reports.

In a Facebook posting, Yoon Meehyang, who heads an activist group representing South Korean women forced to serve as wartime sex slaves for Japanese troops, said Kim was a consistent trouble-maker at the group's rallies several years ago. Yoon and other activists expressed worries that the attack on Lippert would harm the public image of peaceful leftist protesters, or prompt the conservative government to suppress their activities.

South Korea's Foreign Ministry released a statement condemning the attack and vowing a thorough investigation and strengthened protection of embassies. South Korean President Park Geun-hye, who is on a Middle East tour, said in a statement that what happened was "not only a physical attack on the U.S. ambassador in South Korea but also an attack on the Korea-U.S. alliance and we will not tolerate it." Conservative civic groups planned to hold rallies later Thursday to condemn the attack on the ambassador.