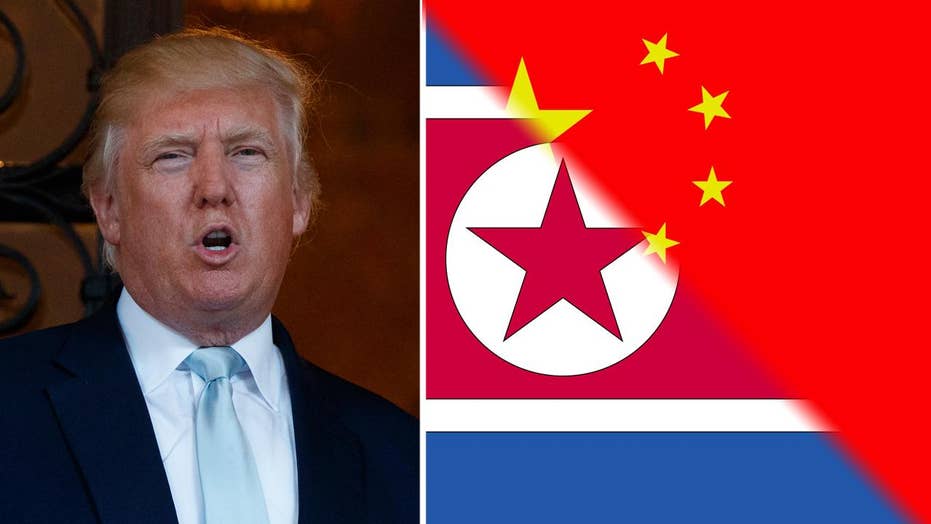 The president-elect called out the country for not doing more to stop Kim Jong-un from getting a nuclear weapon; James Rosen has the story for 'Special Report'

A North Korean official said Sunday that Pyongyang could launch an ICBM “anytime” and reserves the right to conduct a test wherever it sees fit.

North Korea’s state news agency quoted an anonymous foreign ministry spokesman in a report, adding that the timetable would be determined by the “supreme headquarters of the DPRK.” DPRK stands for the North's official name, the Democratic People's Republic of Korea.

OPINION: THANKS TO OUR MISTAKES WITH IRAN, THE NORTH KOREAN THREAT IS AT RECORD LEVELS

U.S. officials countered the official’s bluster saying that if Pyongyang launched anything that threatens the territory of the U.S. or its allies, it will be shot down.

The possibility of a successful ICBM launch has been in the back of the minds of the U.S. The launch would be seen as a serious concern to Washington and its allies. Kim Jong Un announced in his annual New Year's address that the country had reached the "final stages" of ICBM development.

President-elect Trump himself responded with a tweet two days later, saying the possibility of the North developing a nuclear weapon capable of reaching the U.S. "won't happen!"

Defense Secretary Ash Carter told NBC’s “Meet the Press” that the North’s missile and nuclear weapons development was a “serious threat.” He said the U.S. military would shoot down any missiles launched by the North that appeared to be headed toward American territory or the territory of any U.S. allies.

Beyond the rhetoric, however, the KCNA report suggested Pyongyang is hoping Trump will take a new approach toward relations.

Throughout his tenure, President Barack Obama followed a policy of "strategic patience," which essentially focused on punitive sanctions while ruling out any significant talks or contacts until North Korea made the first move toward denuclearization. The KCNA report slammed U.S. Deputy Secretary of State Anthony Blinken for saying last week that sanctions must be maintained to keep the pressure on Pyongyang.

"Anyone who wants to deal with the DPRK would be well advised to secure a new way of thinking after having a clear understanding of it," KCNA quoted the foreign ministry official as saying.