Pushes Fox News microphone away. . . no apology about Otto Warmbier

NEW YORK CITY – As a journalist, the accepted method of asking for comment from the North Korean mission to the United Nations is to call or email their office.

But, for years, they have yet to return a phone call or answer an email.

So when I saw Kim Jong Un's ambassador to the United Nations, Kim Song, leaving the U.N. Secretariat building and taking a shortcut to walk to his office on Second Avenue one block away, I thought that his sudden appearance presented an opportunity for Fox News to ask the questions his government has long seen fit not to answer.

Only in the encounter, Kim Jong Un's top diplomat in our country did not act terribly diplomatic.

He pushed my Fox News microphone away when I asked him about Otto Warmbier. 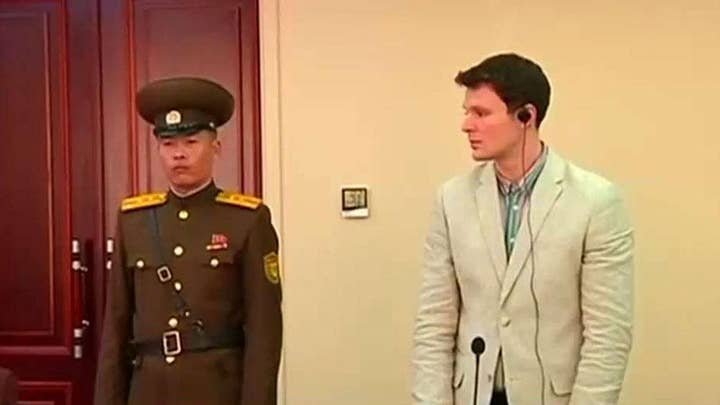 Otto was the 22-year-old University of Virginia student from Ohio who, while on an educational tour of Ambassador Song's homeland, was brutally tortured, beaten and basically murdered by the regime.

A federal judge in Washington, D.C. recently ruled that Otto was forced to make a false confession to a crime that he did not commit, and for the offense of being an American, was arrested for Kim's propaganda purposes against the United States.

When he finally was sent home after 17 months in captivity, doctors discovered that he had suffered severe brain damage, was in a vegetative state, deaf and blind. He died in a Cincinnati hospital shortly after his return.

With Otto in mind, I first asked Ambassador Song about the New York City Council proposal to name the block of Second Avenue in front of the building that houses his office, as "Otto Warmbier Way." The proposal, from City Council Members Keith Powers, D-Manhattan, and Joe Borelli, R-Staten Island, would forever keep Otto's memory alive and serve as a pointed reminder to the North Koreans, and other U.N. diplomats, of the true nature of the regime.

When he was given an opportunity to express any sense of compassion, the ambassador passed.

I asked if he had any reaction if New York City names his street "Otto Warmbier Way?"

I asked if had any reaction for the Warmbier family, and wanted to say anything to them?

No kind words, no words of apology, nothing.

It is no wonder then that Otto's mother, Cindy Warmbier, said this last week in Washington, D.C. at a Hudson Institute symposium on North Korea:

"North Korea, to me, is a cancer on the Earth, and if we ignore this cancer, it is not going to go away. It's going to kill all of us."

"Otto was all about love and goodness... My gorgeous boy, who every girl had an immediate crush on, looked like a monster. I swear. The look in his eyes, which I didn’t know he was blind at the time, was absolute horror, horror, like he'd seen the devil. And he had." 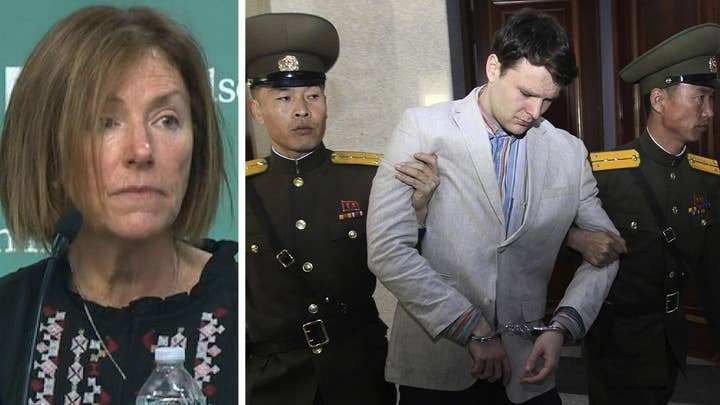 "There's a charade going on right now. It's called diplomacy. How can you have diplomacy with someone that never tells the truth? That's what I want to know. I am all for it, but I'm very skeptical. They only care about themselves, they do not care about all the people in the concentration camps. They are not gulags to me, they are concentration camps. The only difference between Hitler and him, is he is doing going it to all of his people, and to other people, too."

Otto's father, Fred, will appear at the United Nations on Friday. He will be attending a "Symposium on the Human Rights Situation in the DPRK" (North Korea), sponsored by the Japanese Mission to the U.N. and Japan Ambassador Koro Bessho. The meeting will focus on the plight of countless Japanese abductees who were snatched by North Korea over the decades.

Japanese family members of missing relatives will attend the event, as will the representative of another American family. James Sneddon will raise the plight of his brother, David Sneddon. David was a 24-year-old Mormon missionary who had just graduated from Brigham Young University when he disappeared while hiking in China in 2004. Unconfirmed reports say that he was abducted by the North Koreans and has not been heard from since.

The families will pose the hard questions to the North Koreans, but just like my sidewalk talk with Ambassador Kim, will yield little from those who rule Pyongyang.

Kim Jong Un's diplomat had chosen not to answer, and what he did say was terse and dismissive. His defiant silence belied any dignity, grace or compassion, just like the regime that he represents.