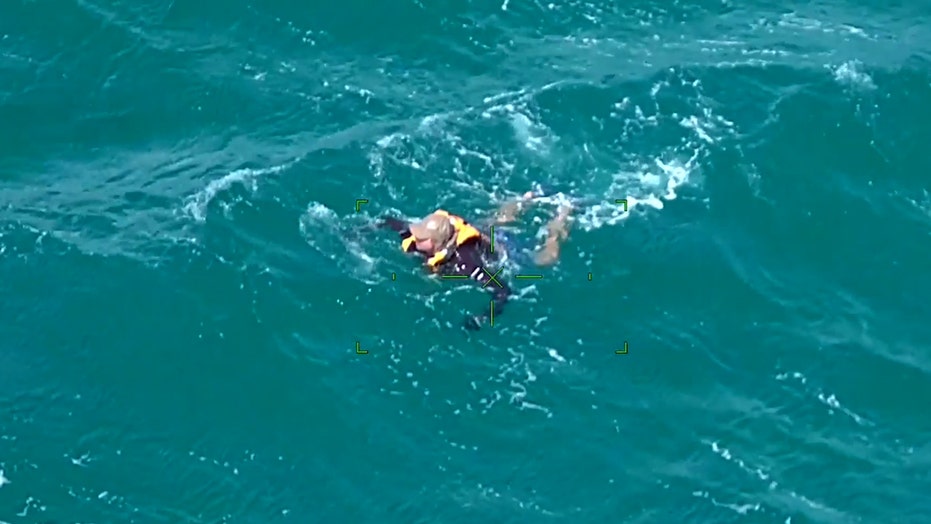 Authorities in New Zealand are hailing the preparedness of a "very experienced" kayaker that helped save his own life over the weekend when he was found treading water nearly two miles from his kayak amid rough seas.

The Auckland City District Police said the department's marine unit and eagle helicopter were involved in a rescue on Sunday after an empty kayak was found floating two miles off Auckland's Waiake Beach.

Police said conditions were "not great" at the time, with winds between 17 and 23 mph and six-foot swells.

Footage released by police on Facebook shows the police helicopter searching for the kayaker, Alex.

Police noted that trying to find a person in the water with white caps is "difficult," with glare on the water from the sun not helping rescuers.

Alex was eventually found treading water with a life jacket on and was pulled from the water by a supporting police boat.

"If he hadn't had the life-jacket on, I don't think we probably would have been here talking like this," Sgt. Garry Larsen of the Auckland Police Maritime Unit said in the video. "He did all the right things, apart from staying with the kayak."

HERD OF HORSES IN RUSSIA FALL THROUGH FROZEN LAKE, RESCUED BY FARMERS

In addition to wearing a life jacket, Alex had a GPS unit on board his kayak, a personal locator beacon, a waterproof cellphone and a PFD life-saving device.

Alex was found about two miles from his kayak, after treading in the water for about an hour. (Auckland City District Police)

He was found nearly two miles from his kayak, according to Stuff.co.nz.

Alex said in the video released by police that he owes his life to those who rescued him.

Officials said the kayak had been outfitted with several important items that helped them locate and rescue the man. (Auckland City District Police)

“It is the kind of situation where you start accepting, because I really can’t do much, and nobody knows," he said in the video, adding, "Suddenly when I see the helicopter, and it is searching for me and actually found me, it was a massive relief."