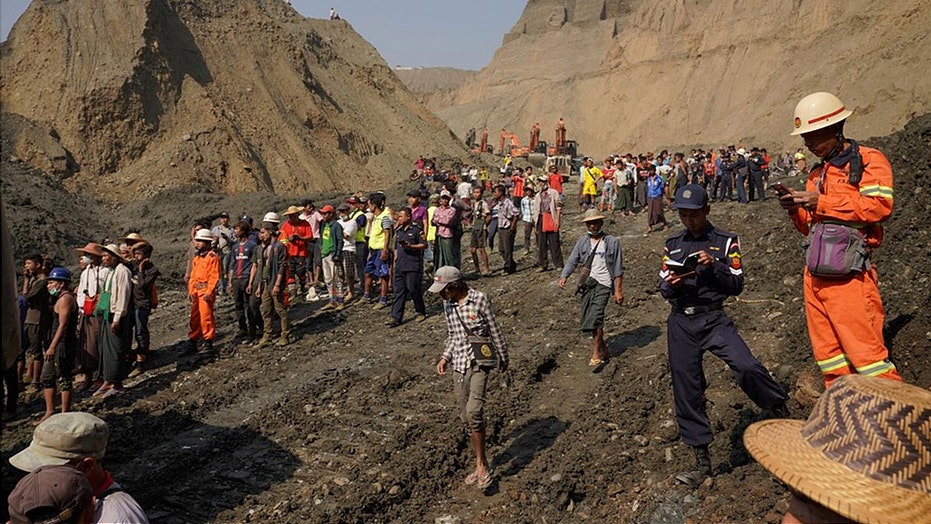 More than 50 people were feared dead Monday morning after a massive mudslide at a jade mining site in Myanmar.

The disaster struck near Maw Wun Kalay, a village in the gemstone-rich Hpakant area of Kachin state.

Some 54 workers from a pair of private mining companies were buried along with 40 machines and vehicles about 100 feet underground, according to local lawmaker Tin Soe.

Local people look on in a jade mine where the mud dam collapsed in Hpakant, Kachin state, Myanmar April 23, 2019. (REUTERS)

"They won’t survive. It is not possible because they are buried under mud,” Tin Soe told Reuters. "It is very difficult to retrieve the bodies."

He added that only three bodies had been recovered so far and more than 50 people remained missing.

RESCUERS USE EXCAVATOR AT COLLAPSE INDONESIA GOLD MINE

Dozens of people die each year in landslides or collapses in the jade mining industry. More than 100 were killed in a major collapse in 2015.

Hpakant produces some of the best-quality jade in the world, according to Al Jazeera. In 2014, Myanmar's jade business was worth up to $31 billion, almost half the country's gross domestic product, according to anti-corruption group Global Witness.