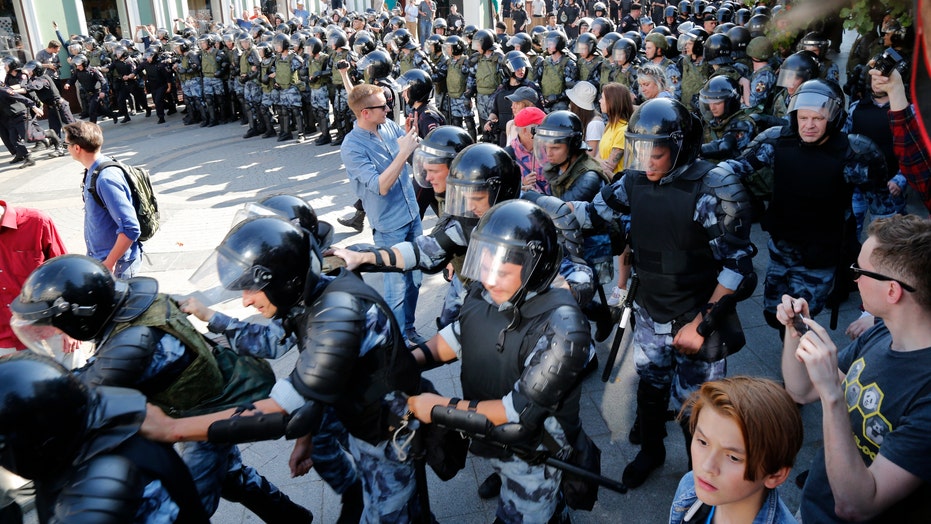 Police in Moscow arrested more than 750 people during a demonstration outside city hall on Saturday, where they were calling for fair elections after the upcoming city council elections on Sept. 8 excluded opposition candidates from being on the ballot, according to a Russian organization that monitors political arrests.

OVD-Info said 779 people were detained. Moscow police earlier said 295 people had been taken in, but did not immediately give a final figure.

The protest was organized by opposition leader Aleksei A. Navalny, 43, who was arrested Wednesday and sentenced to 30 days in jail. Other opposition politicians were detained on Saturday, including Ilya Yashin, Dmitry Gudkov and Ivan Zhdanov.

Russian police are wrestling with demonstrators and have arrested hundreds in central Moscow during a protest demanding that opposition candidates be allowed to run for the Moscow city council. (AP Photo/ Alexander Zemlianichenko)

Yashin's Facebook page said that 10 masked officers took him from his apartment in Moscow the night before the demonstration. After being arrested, Navalny said on Instagram, "I have been detained and am now at a police station wearing shorts like a stupid man,"

Moscow police estimated the number of protesters at 3,500. They were originally set up near the mayor's office before being relocated by police towards the side streets. The protest was reportedly unauthorized by the government, and people were seen scrapping with police officers and shouting "Russia will be free!" and "Who are you beating?"

The opposition politician names were reportedly not included on the ballot because they had not received enough signatures to qualify, according to election officials. Supporters of the opposition party say the government is forcing them out, so they won't be able to participate in the elections.

Russian police are wrestling with demonstrators and have arrested hundreds in central Moscow during a protest demanding that opposition candidates be allowed to run for the Moscow city council. (AP Photo/Alexander Zemlianichenko)

Helmeted police barged into Navalny's video studio as it was conducting a YouTube broadcast of the protest and arrested program leader Vladimir Milonov. Police also searched Dozhd, an internet TV station that was covering the protest, and its editor in chief Alexandra Perepelova was ordered to undergo questioning at the Investigative Committee.

RUSSIAN SUSPECT IN $4B BITCOIN FRAUD IS SUED IN CALIFORNIA; US, RUSSIA SEEK HIS EXTRADITION FROM GREECE

There was no immediate information on what charges the detainees might face.

Police block a street during an unsanctioned rally in the center of Moscow during a protest on Saturday. (AP Photo/ Pavel Golovkin)

Once a local, low-key affair, the September vote for Moscow's city council has shaken up Russia's political scene as the Kremlin struggles with how to deal with strongly opposing views in its sprawling capital of 12.6 million.

The decision by electoral authorities to bar some opposition candidates from running for having allegedly insufficient signatures on their nominating petitions had already sparked several days of demonstrations even before Saturday's clashes in Moscow.

The city council, which has 45 seats, is responsible for a large municipal budget and is now controlled by the pro-Kremlin United Russia party. All of its seats, which have a five-year-term, are up for grabs in the Sept. 8 vote.

Over 22,000 people gathered for a protest in downtown Moscow last Saturday, the largest in years.