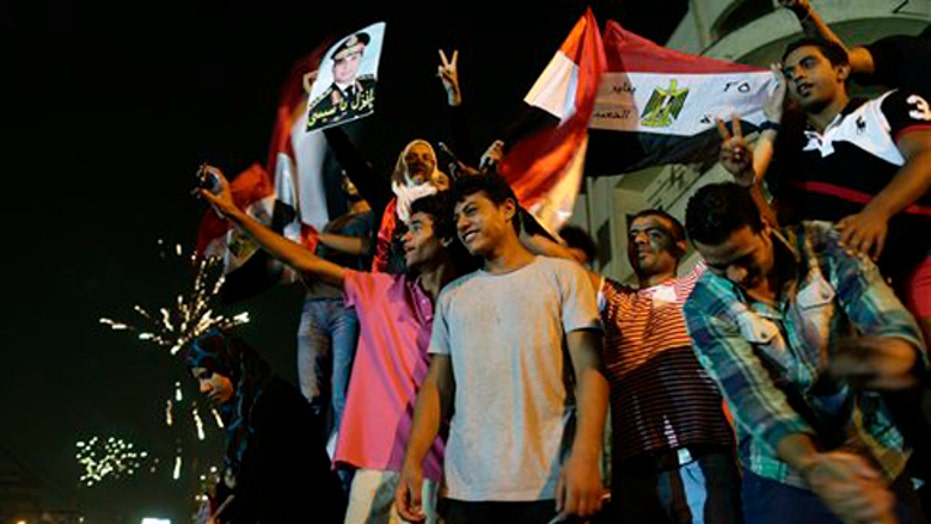 Ousted President Mohammed Morsi was reportedly being held at an undisclosed location Wednesday night, hours after the military toppled him and suspended the constitution.

Ahmed Aref, a spokesman for the Muslim Brotherhood party, told Reuters both Morsi and an aide were being held but he didn't know their location. A security official said they were at a military intelligence facility, Reuters said.

In anouncing Morsi's ouster earlier in the day, Egypt's top military commander said he had been replaced by the chief justice of the constitutional court as interim head of state.

In addition, Gen. Abdel-Fattah el-Sissi said the country's constitution has been temporarily suspended and new elections would be held.

At least 14 people were killed in clashes between Morsi's supporters and opponents following the announcement, Reuters said, citing the state news agency MENA.

Eight of the dead were reported to be in the northern city of Marsa Matrouh, with three killed and at least 50 wounded in Alexandria. Another three were killed in the southern city of Minya.

In Washington, President Obama issued a statement Wednesday night saying the administration was "deeply concerned" by the decision to remove Morsi and urged the military to avoid "any arbitrary arrests" of the president and his supporters.

Obama also said in light of Morsi's ouster he had "directed the relevant departments and agencies to review the implications under U.S. law for our assistance to the government of Egypt."

At the same time, a security official in Cairo said the head of Morsi's Muslim Brotherhood political party and the organization's deputy chief had been arrested, reportedly in connection with an escape from prison in 2011.

The state-run newspaper Al-Ahram said arrest warrants were being issued for 300 members of the Brotherhood, Reuters reported.

Millions of anti-Morsi protesters in Tahrir Square and around the country erupted in cheers at the news of Morsi's ouster, setting off fireworks and shouting "God is great" and "Long live Egypt."

Morsi said on his presidential Facebook page that the military's action "represents a military coup and it is unacceptable."

A U.S. official said nonessential diplomats and embassy families had been ordered to leave Egypt amid the unrest. The State Department issued a warning urging U.S. citizens in the country to leave.

In appointing Adli Mansour the new interim leader, el-Sissi also said a government of technocrats would be formed with "full powers" to run the country. He did not specify how long the transition period would last or when new elections might be held.

Top military officials and opposition leaders met Wednesday and agreed on a political roadmap for the country's future, el-Sissi said. A new presidential cabinet will be formed as well as a national reconciliation committee, which will include youth movements that have been behind anti-Morsi demonstrations.

El-Sissi also warned said the military would deal "decisively" with any violence sparked by the announcements.

Before el-Sissi's address, Egyptian troops, including commandos in full combat gear, were deployed across much of Cairo, including at key facilities, on bridges over the Nile River and at major intersections.

Witnesses told Reuters that the army erected barbed wire and barriers around Morsi's work compound, and moved in vehicles and troops to prevent supporters from getting to his palace.

A travel ban was put on Morsi and the head of his Muslim Brotherhood, Mohammed Badie, as well as Badie's deputy Khairat el-Shater, officials told the Associated Press.

Minutes before the military’s deadline for Morsi to resolve the nation’s political crisis passed Wednesday afternoon, the embattled leader called for "national reconciliation," but vowed he would never step down.

Millions were in the main squares of major cities nationwide, demanding Morsi's removal, in the fourth day of the biggest anti-government rallies the country has seen, surpassing even those in the uprising that ousted against his autocratic predecessor Hosni Mubarak. Critics say Morsi  set the nation on a path toward Islamic rule.

Employees at Egypt's state TV station said military officers were present in the newsroom monitoring its output, but not interfering with their work.

In an emotional 46-minute speech late Tuesday, Morsi vowed not to step down and pledged to defend his constitutional legitimacy with his life in the face of three days of massive street demonstrations calling for his ouster.

The Islamist leader accused Mubarak loyalists of exploiting the wave of protests to topple his regime and thwart democracy.

"There is no substitute for legitimacy," said Morsi, at times angrily raising his voice, thrusting his fist in the air and pounding the podium. He warned that electoral and constitutional legitimacy "is the only guarantee against violence."

On Tuesday, clashes in Cairo and elsewhere in the country left at least 23 people dead, most in a single incident near the main Cairo University campus. The latest deaths take to 39 the number of people killed since Sunday in violence between opponents and supporters of Morsi, who took office in June last year as Egypt's first freely elected leader.

"It's never been about one individual," she told reporters. "It's been about hearing and allowing the voices of the Egyptian people to be heard."

Pentagon Spokesman George Little said there has been no change in terms of the U.S. military pre-positioning assets in and around Egypt in the event they are called upon to assist the U.S. embassy in Cairo.