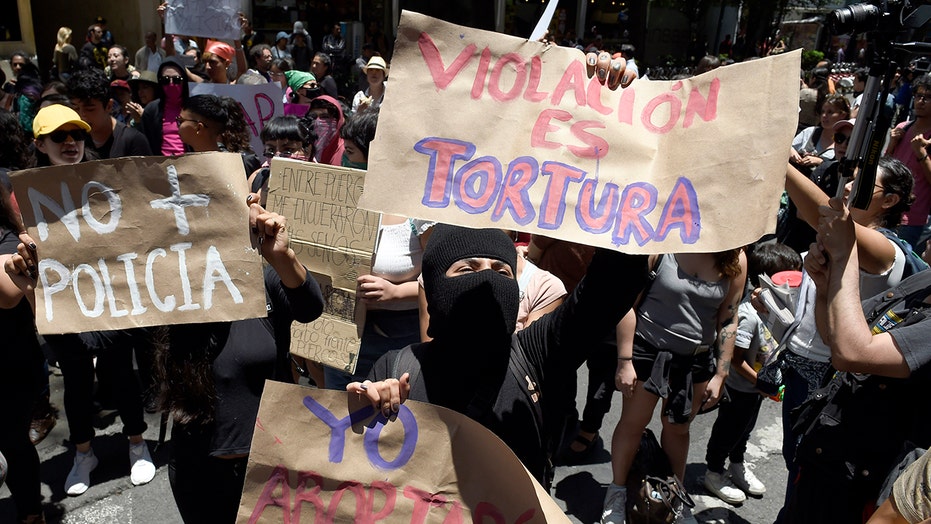 Mexico City police have suspended six officers as part of investigations into the rape of two teenage girls.

The allegations by the teenagers, who claim members of the police force raped them earlier this month, prompted hundreds of protesters to fill city streets demanding justice.

A 17-year-old girl claimed four police officers raped her in their patrol car, while a 16-year-old girl accused an officer of raping her in a museum, the BBC reported.

"They don't protect us, they rape us," a crowd of mostly female protesters chanted Monday, the outlet reported.

Mayor Claudia Sheinbuam, the city’s first woman elected to the office, on Tuesday announced the suspensions in a video on Twitter.

"There will be no impunity nor any fabrication of guilt,” she said.

One policeman was arrested Thursday in the case relating to the 16-year-old, Agence France-Presse reported. Details on the other officers weren’t immediately available.

A group of activists take part in a protest called by civil organizations against the police Monday. (ALFREDO ESTRELLA/AFP/Getty Images)

Citing statistics from the Secretariat of Security and Civil Protection, the BBC says there have been 8,464 reported rape cases this year. It is estimated that 94 percent of cases in the country go unreported.

Mexico has a high rate of violence against women, with nine being murdered every day, the AFP reported, citing statistics from the United Nations.