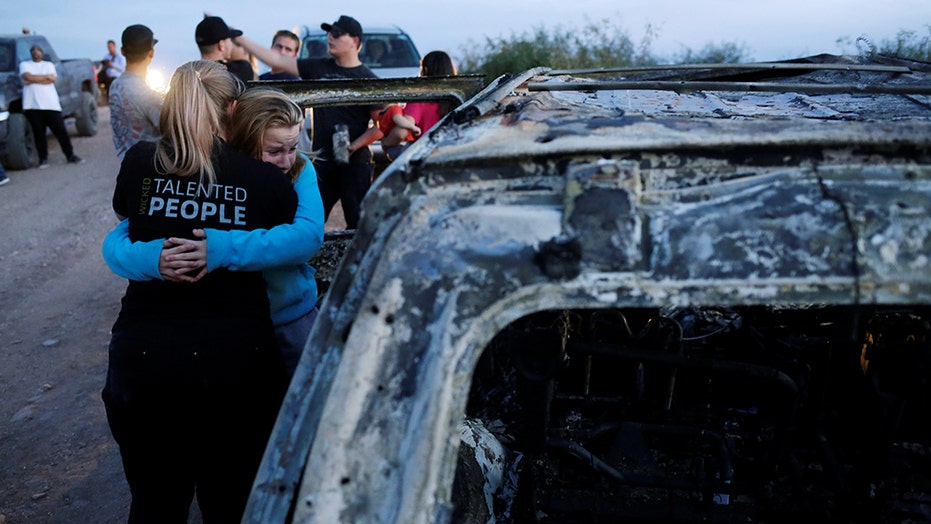 Relative of victims killed in Mexican ambush speaks out on 'Fox &amp; Friends'

Lafe Langford, a relative of Americans killed by a drug cartel in Mexico, details the evidence from the deadly attack on 'Fox &amp; Friends.'

The charred skeleton of an SUV; a windshield pierced with bullet holes; a blood-stained car seat — harrowing new images from northern Mexico where nine Americans were slaughtered by cartel gunmen have been released, showing relatives reacting to the unspeakable scene.

Three women and six children lost their lives and several were injured in Monday's massacre.

The bloodshed happened in Sonora state, where the suspected cartel gunmen ambushed the families' convoy of three SUVs as they were on their way to see relatives in the U.S. The families targeted lived in a Mormon community about 70 miles south of Douglas, Ariz.

Relatives of slain members of Mexican-American families belonging to Mormon communities react next to the burnt wreckage of a vehicle where some of their relatives died in Sonora state.  (Reuters)

Pictures from the scene showed a vehicle with dozens of bullet holes. It was burnt out from a fire after a bullet apparently hit the gas tank and caused an explosion. Relatives were pictured standing around the wreckage, hugging each other and crying.

Rhonita Maria Miller, 31, and four of her children – a 12-year-old son Howard Jr., his 10-year-old sister Krystal and 8-month-old twins Titus and Tiana – were found shot and burned in their vehicle, relative Kendra Miller said in an account of the killings. She said only a few bones and ashes remained.

Members of the Lebaron family watch the burned car where part of the nine murdered members of the family were killed during a suspected cartel ambush in the Sonora mountains in Mexico. (AFP/Getty)

Two other mothers, Christina Marie Langford Johnson, 31, and Dawna Ray Langford, 43, along with Dawna’s two sons, 11-year-old Trevor Harvey Langford and 2-year-old Rogan Jay Langford, were all also shot to death. The two mothers were found in a separate location, according to relatives.

Johnson had reportedly stashed her 7-month-old daughter Faith, still strapped in her car seat, on the floor of the vehicle before she got out and raised her arms to show the gunmen the women and children weren’t a threat. Prosecutors said her body was found 15 yards away riddled with bullets.

A security baby car seat stained in blood is pictured in a bullet-riddled vehicle belonging to one of the families.  (REUTERS)

Officials have said that the gunmen may have mistaken the group's large SUVs for those of a rival gang amid a vicious turf war.

The killers were apparently members of the Juarez drug cartel and its armed wing, La Linea — "The Line" — whose gunmen had entered Sinaloa cartel territory and set up an armed outpost on a hilltop and an ambush further up the road, The Associated Press reported.

The Juarez cartel apparently wanted to send a message that it controlled the road into Chihuahua. It was this invasion force that the American mothers and their three vehicles drove into.

It was only after the first vehicle was shot up and set afire that 50 or 60 Sinaloa cartel gunmen showed up to see what had happened.

The interior of a bullet-riddled vehicle belonging to one of the families killed in the massacre.  (REUTERS)

But Johnson’s sacrifice saved the life of her daughter, Faith, who was miraculously found unharmed.

Seven other children survived the massacre thanks to the courage of a 13-year-old boy, Devin Langford. After witnessing the deaths of his mother and two brothers, he hid his bleeding siblings in nearby bushes while he made the 6-hour, 14-mile trek back to La Mora to get help, Miller said.

A group of male relatives set out to try to rescue the youngsters but turned back when they heard gunfire ahead. In recordings of calls between the men, they can be heard having an agonizing debate over whether it was better to risk more lives, or wait for an hour or two until Mexican army troops arrived.

When they finally found the children, what they saw was heart-wrenching.

Relatives of the innocent victims observe the wreckage of a burn-out car where several members of a family were found shot and burned to death. November 5, 2019.  (REUTERS)

Mexican authorities airlifted the wounded children to a hospital in the U.S., where they were in “stable” condition, according to Sonora state health officials.

A suspect was arrested early Wednesday near the Arizona-Mexico border in connection to the deaths. Investigators said they found the suspect holding two hostages who were bound and gagged inside a vehicle. They also found four assault rifles and a bulletproof SUV.

President Trump in a tweet following the attack called on Mexico wage “war” on the drug cartels.

"This is the time for Mexico, with the help of the United States, to wage WAR on the drug cartels and wipe them off the face of the earth,” he wrote. “We merely await a call from your great new president!"

But Mexican President Andrés Manuel López Obrador later responded: "The worst thing you can have is war."

The FBI has since offered assistance to the Mexican government in the investigation, but it was unclear if Mexican authorities have taken up the offer.

Fox News' Brie Stimson and Jake Gibson and The Associated Press contributed to this report.