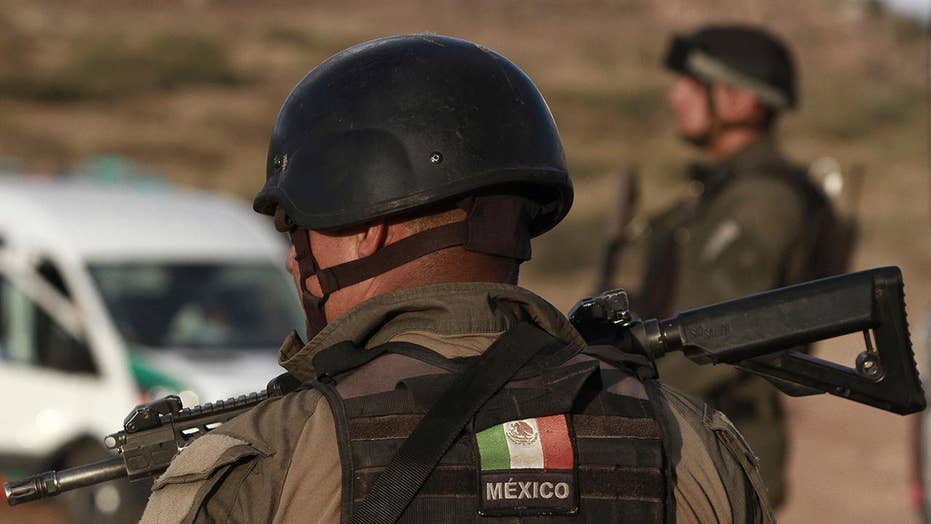 A suspect was arrested near the Arizona border with Mexico in connection with the deaths of nine U.S. citizens - six children and three women – Monday who were living in a Mormon community about 70 miles south of Douglas, Ariz., investigators said early Wednesday.

The victims’ convoy came under fire during the day in an ambush by gunmen believed to be affiliated with a drug cartel in Mexico.

A car passes through Colonia LeBaron, one of many locations where the extended LeBaron family lives in the Galeana municipality of Chihuahua state in northern Mexico, Tuesday, Nov. 5, 2019. Drug cartel gunmen ambushed on Monday three vehicles along a road near the state border of Chihuahua and Sonora, slaughtering at least six children and three women from the extended LeBaron family, all of them U.S. citizens living in northern Mexico, authorities said Tuesday. (AP)

Officials have said that the gunmen may have mistaken the group's large SUVs for those of a rival gang amid a vicious turf war.

Eight young children - including babies - survived the attack by hiding in the brush and even though they were wounded some walked miles to get help. Five badly wounded children were transported to hospitals in Arizona for treatment.

A relative of 13-year-old Devin Blake Langford, who was uninjured in the attack, said he took charge of the group and ended up walking 14 miles for help.

"After witnessing his mother and brothers being shot dead, Devin hid his six other siblings in the bushes and covered them with branches to keep them safe while he went for help," she said. "When he took too long to return, his 9-year-old sister left the remaining five to try again."

Relatives tried to reach the children but were prevented by gunfire.

Members of the Lebaron family watch the burned car where part of the nine murdered members of the family were killed and burned during an gunmen ambush on Bavispe, Sonora mountains, Mexico, on November 5, 2019. (AFP via Getty)

One mother reportedly hid her baby inside her car before she got out with her arms raised and was killed by the cartel.

"This sort of thing shouldn't go unnoticed," Austin Cloes, a relative of one of the victims, said. "And these sorts of people shouldn't just be buried without their names being put out there. These are great people."

The FBI meanwhile has offered assistance to the Mexican government, hours after President Andres Manuel Lopez Obrador rejected President Trump's overture to "wage war" on the country's drug cartels in response to the brutal slayings.

“If Mexico needs or requests help in cleaning out these monsters, the United States stands ready, willing & able to get involved and do the job quickly and effectively,” Trump tweeted Tuesday. “The great new President of Mexico has made this a big issue, but the cartels have become so large and powerful that you sometimes need an army to defeat an army!”

Obrador thanked Trump but declined the help, saying, "The worst thing you can have is war."