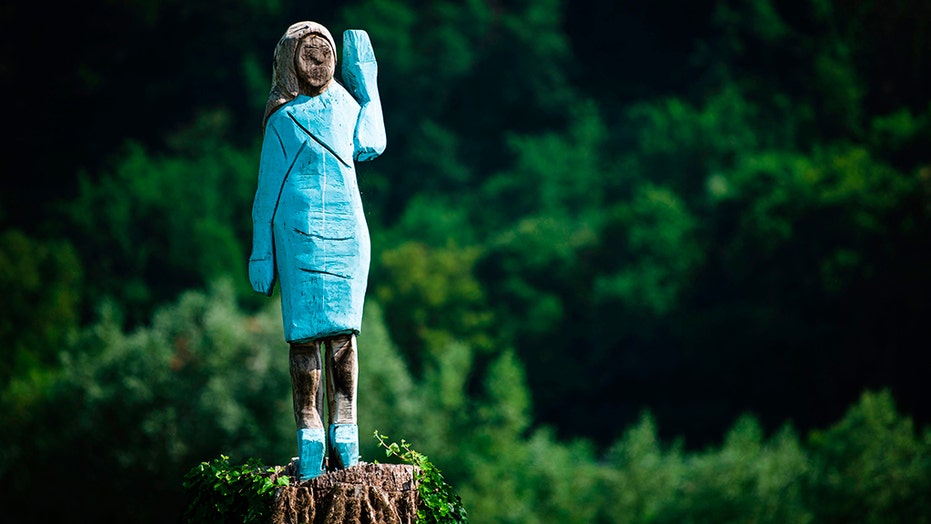 First Lady Melania Trump’s Slovenian home town is paying a tribute to her as a “Slovenian hero” with a wood-carved statue that has raised some eyebrows, with some decrying it as a “scarecrow.”

The life-size statue was officially unveiled on Friday on the outskirts of Sevnica. It was first envisioned by Brad Downey, a 39-year-old American artist.

Downey, who told AFP that it’s the first monument dedicated to the First Lady in the world, commissioned a local artist to carve a tree using a chainsaw and shows the wife of President Trump in a blue dress raising her left hand in a waving motion.

But the sculpture has attracted some detractors who say it looks more like a “scarecrow” than a true representation of the First Lady.

“I can understand why people might think that this falls short as a description of her physical appearance,” Downey told AFP, but said the statue was “absolutely beautiful.”

First Lady Melania Trump’s Slovenian home town is paying a tribute to her as a “Slovenian hero” with wood-carved statue that has raised some eyebrows, with some decrying it as a “scarecrow.”<br data-cke-eol="1">

The town of Sevnica has become an overnight tourist attraction following Trump’s election into office in 2016, with some journalists looking for insight into the first lady.

The town welcomed the opportunity to cater to the tourists, reportedly offering a series of Melania Trump-branded food and other items.

The actual sculptor is Ales Zupevc, a local artist also known as Maxi. Downey told the AFP that conversations with the artist helped him to see Trump’s ancestral town through local eyes.

“You see this river that she would have seen as a child, you see the mountains,” he told the outlet.

Yet the statue’s style was mocked by others in the country, with some unsure whether it was meant to be a parody or a serious attempt at honoring the first lady.

“If the monument was meant to be a parody, then the artist has been successful,” Nika, an architecture student told AFP. “We in Sevnica can only laugh and, at the same time, hold our heads in our hands over their [the Trumps’] catastrophic reputation.”