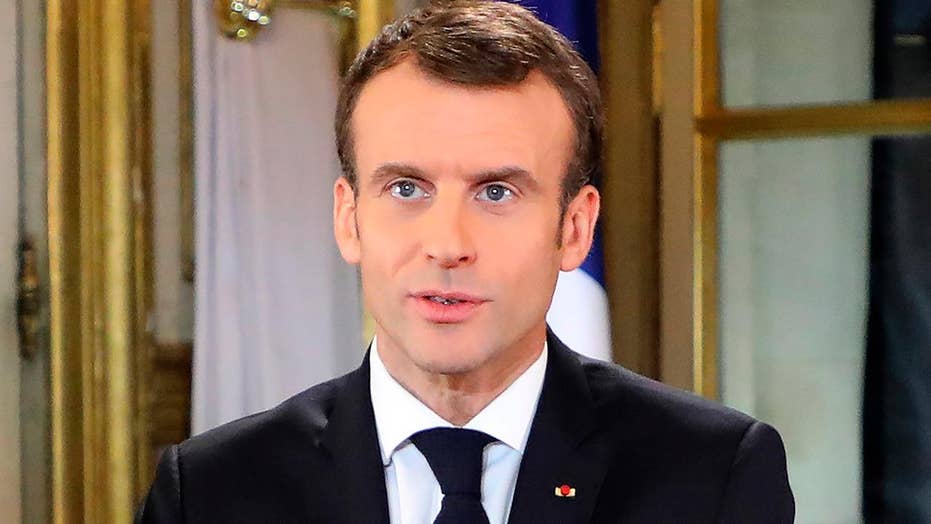 After weeks of anti-government protests during which he was mostly silent, Emmanuel Macron faced his nation on television at what he called 'an historic moment'; Greg Palkot reports from London.

French President Emmanuel Macron's pre-recorded attempt to reassert control over his divided, inflamed nation was met with scathing criticism and derision Tuesday by many in the protesting groups he'd hoped to win over.

The French leader broke his nearly two-week silence for the first time Monday, delivering a brief, taped address on TV in which he tried placating the increasingly violent demonstrators by encouraging employers to offer tax-free year-end bonuses, raising the minimum wage and offering tax relief for struggling workers and pensioners.

"We want a France where one can live in dignity through one's work and, on this, we have gone too slowly," Macron said. "I ask the government and parliament to do what is necessary."

But citizens across the country said the president's promises were too little, too late.

"It's a charade," Luc, a pizza chef in Marseille, told Agence France-Presse. "He announces bonuses to be paid by employers but how will they do it? They don't have more money."

Other demonstrators said they wanted a national referendum to address economic issues.

Less than an hour after Macron spoke, a toll booth along a highway on France's border with Spain was completely blocked by protesters, according to AFP.

"Maybe if Macron had made this speech three weeks ago, it would have calmed the movement, but now it's too late," Gaetan, a protestor, told the news agency. "For us, this speech is nonsense."

Some protest representatives have said more demonstrations will be held Saturday, following those in Paris that turned violent during the previous two weekends. On Tuesday, students groups planned "Black Tuesday" demonstrations to bring attention to their demands for education reform.

The so-called yellow vest protests began in November, spurred by a fuel tax hike -- which Macron retreated from last week -- but have grown into increasingly violent demonstrations with expanding demands and a growing anger focused on Macron's presidency.

The fallout from the protests so far could cost France 0.1 percent of gross domestic product in the last quarter of the year, French Finance Minister Bruno Le Maire warned Monday.

"That means fewer jobs, it means less prosperity for the whole country," he said.

Facing exceptional protests, French President Emmanuel Macron is promising to speed up tax relief for struggling workers and to scrap a tax hike for retirees. (Ludovic Marin/Pool Photo via AP)

Even as he essentially capitulated to several demands made by the protesters, the president said authorities will show "no indulgence" to those behind the vandalism and rioting, adding "no anger justifies" attacking police or looting stores.

But his words for calm may not have quelled the anger.

Over 700 arrests have been made in France amid the violent protests due to rising fuel taxes; Greg Palkot reports.

"It's just window dressing, for the media, some trivial measures, it almost seems like a provocation," Thierry, a bicycle mechanic, told AFP before joining in on another demonstration after the speech. "We're really wound up, we're going back to battle."