PARIS - President Trump taunted French President Emmanuel Macron as France was burning in the wake of violent protests across the country on Saturday where an army of Yellow Vests demanded the president’s head.

“Very sad day & night in Paris. Maybe it’s time to end the ridiculous and extremely expensive Paris Agreement and return money back to the people in the form of lower taxes?” Trump tweeted after tens of thousands of people across France went to the streets to protest Macron’s government.

“The U.S. was way ahead of the curve on that and the only major country where emissions went down last year!” he added.

The latest data suggests that the U.S. was leading the way in cutting its CO2 emissions, though the United Kingdom and Japan, among the developed countries, also cut their emissions.

“The Paris Agreement isn't working out so well for Paris. Protests and riots all over France,” Trump tweeted during the protests earlier today, saying the French don’t want to pay to protect the environment.

Clashes between police and demonstrators, during demonstration of the "Yellow vests", in Paris, France, on December 8th 2018. (Aurelien Morissard / Fox News)

In Paris, some 8,000 heavily armed French police deployed tear gas and stun grenades against up to 5,000 protesters, with agitators clashing with the police.

Casataner estimated there were 10,000 yellow vest protesters in Paris on Saturday, among some 125,000 protesters around the country.

Water cannons were used near Arc de Triomphe, which is safeguarded this weekend after protesters defaced it during the previous weekends.

Some protesters were seen throwing rocks and glass bottles at police officers, sparking a continued flow of tear gas to contain the crowd.

Protester on the Rue Marceau, in front of the Place de l'Etoile, during demonstration of the "Yellow Vests", in Paris, France, on December 8th 2018. (Aurelien Morissard / Fox News)

The Yellow Vests were calling for Macron’s resignation after a series of unpopular decisions, including the now-abandoned gas tax and cutting the taxes on the rich, and the ever-increasing living costs, while the economy continues to struggle.

“We are not here to destroy Paris, we are here to tell Macron we are f--king fed up," said one protester before the clashes with the police began. 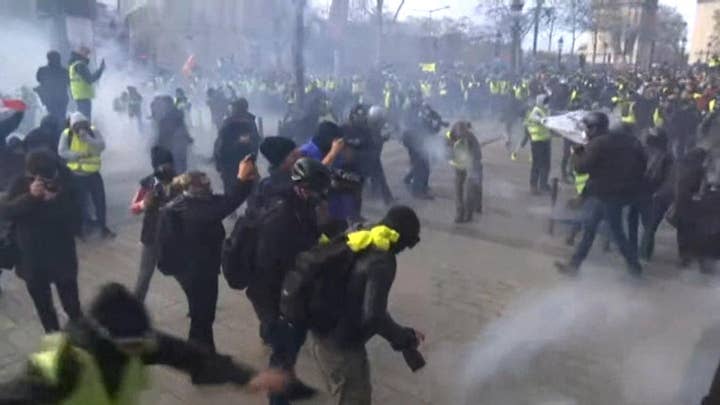 Protesters were also fed up with Macron’s arrogance, pointing out that since the protests began over four weeks ago, he hasn’t made enough efforts to understand the anger of the people.

Macron seemingly has gone missing amid the protest chaos in the country. He swept into power in 2017, having emerged out of obscurity less than a year earlier. Espousing his own brand of centrism, he has presented himself on the world stage as a spokesman for multilateralism and internationalism against a nationalist wave moving through Europe.

But while he has regularly been seen on world stages, including the United Nations and the U.S. Congress, his absence has been conspicuous this week, choosing to keep away from the limelight as his government attempts to deal with protesters' concerns.

Aurelien Morissard / Fox News ; Clashes between police and demonstrators, during demonstration of the "Yellow vests", in Paris, France, on December 8th 2018.

As the protests continued in Paris and the police began using tear gas more actively, some protesters, wearing all black, stormed a phone seller and began looting.

But the Yellow Vests, a popular movement that has no leaders or clearly-defined political affiliations, confronted the looters and told them to stop, fearing that the image of widespread destruction and looting will be used against the movement.

One individual used mace spray, though it's unclear if it was used on a looter. At least one looter was also pinned down on the floor and kicked for breaching the store. 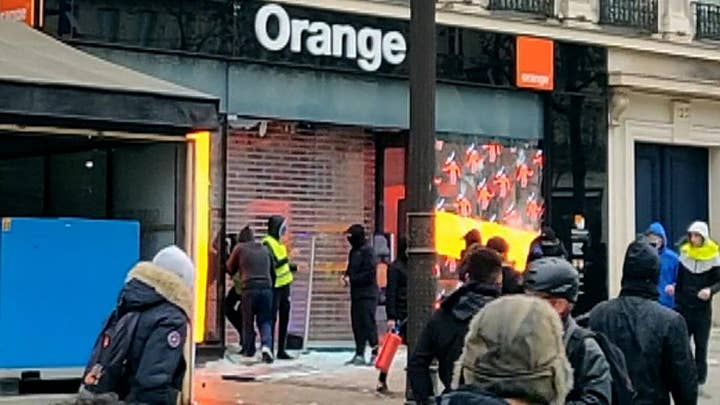 At least one of the business buildings was also breached, with agitators breaking the wooden walls aimed at protecting the business and smashing windows. They later used the wooden parts of the wall against the police.

Many protesters also slammed the French media for portraying the protests as led by violent agitators and for siding with Macron's government.

"We are not black bloc [black clad anarchists], we are ordinary people voicing our anger," said a protester who did not want to be identified.

Clashes between police and demonstrators, during demonstration of the "Yellow vests", in Paris, France, on December 8th 2018.

Around 4 p.m. local time, thousands of protesters began dispersing from the main area, giving more space for the troublemakers to clash with the police. The agitators were seen throwing rocks and throwing back tear gas, forcing the riot police to send reinforcements to the area, while in other parts in Paris similar protests were ongoing.

As the remaining protesters began moving away from the central protest area, they smashed windows and burned cars along their way. Riot police equipped with police batons tried to push away the protesters.

The Yellow Vest movement has inspired people in the Netherlands and Belgium, where protesters hit the streets on Saturday in Amsterdam and Brussels respectively, objecting to excessive taxation.

Protesters set a car on fire Saturday evening after a day of clashes with police. (Fox News)

The protests were less violent than in France, though hundreds were arrested in Brussels. The so-called EU capital was also forced to use water cannons against protesters.

The U.S. Embassy requested that Americans in the French capital “keep a low profile and avoid crowds.”

Shops and tourist destinations, including the Eiffel Tower, were closed and soccer matches were canceled as authorities looked to maintain order.