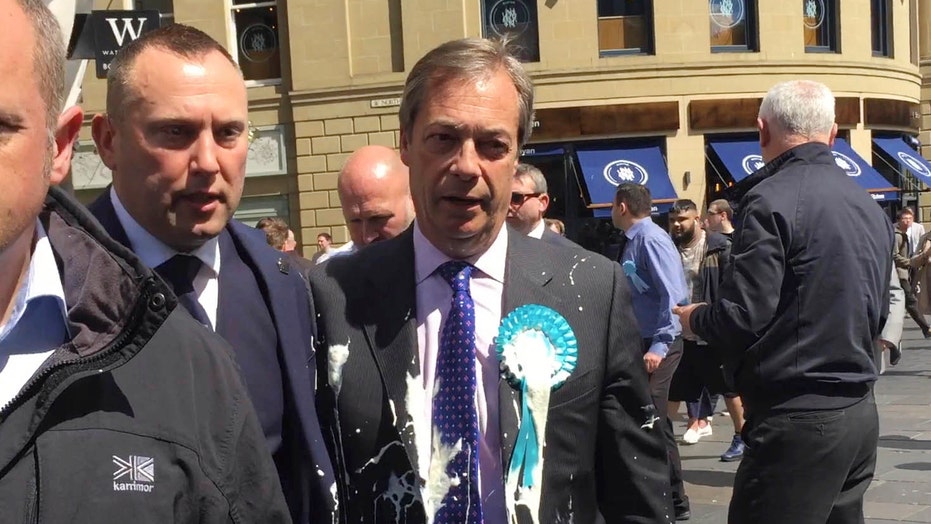 A man who threw a milkshake at Brexit Party leader Nigel Farage pleaded guilty Tuesday and was ordered to pay him compensation.

Paul Crowther, 32, was arrested last month on suspicion of assault after police say he threw a banana salted caramel shake at Farage on Monday to protest what he called the leader’s apparent “bile and racism.”

He pleaded guilty to common assault and criminal damage at North Tyneside Magistrates' Court, which then handed him 150 hours of unpaid work assessment and ordered to pay Farage £350 compensation.

The milkshake attack was described in court as being “politically motivated,” according to the BBC. District Judge Bernard Begley said it “was an act of crass stupidity.”

Brexit Party leader Nigel Farage after being hit with a milkshake during a campaign walkabout for the upcoming European elections in Newcastle, England, Monday May 20, 2019. (PA via AP)

Defense solicitor, Brian Hegarty, meanwhile, said the man’s actions were a “moment of madness” and said the client now regrets it.

“Ordinarily a man of his position would receive a caution,” he said, according to the broadcaster. “The fact is, it is said to be a politically motivated incident which has caused him to appear before this court and caused him to lose his good name.”

“Ordinarily a man of his position would receive a caution. The fact is, it is said to be a politically motivated incident which has caused him to appear before this court and caused him to lose his good name.”

DOUGLAS MACKINNON: MILKSHAKE ATTACKS ARE NOT FUNNY -- LEFT NEEDS TO CONDEMN VILE PRANKS BEFORE IT'S TOO LATE

Paul Crowther speaks to police after Brexit Party leader Nigel Farage was hit with a milkshake during a campaign rally in Newcastle, England, Monday May 20, 2019. (Tom Wilkinson/PA via AP)

Prosecutor James Long said that Farage was both shocked and embarrassed the attack, noting that for a brief moment he would not have known whether it was the milkshake or perhaps "something more sinister".

The perpetrator previously defended his actions against Farage, telling reporters at the scene that it was “a right of protest against people like him,” adding that “the bile and the racism he spouts out in this country is far more damaging than a bit of milkshake to his front."