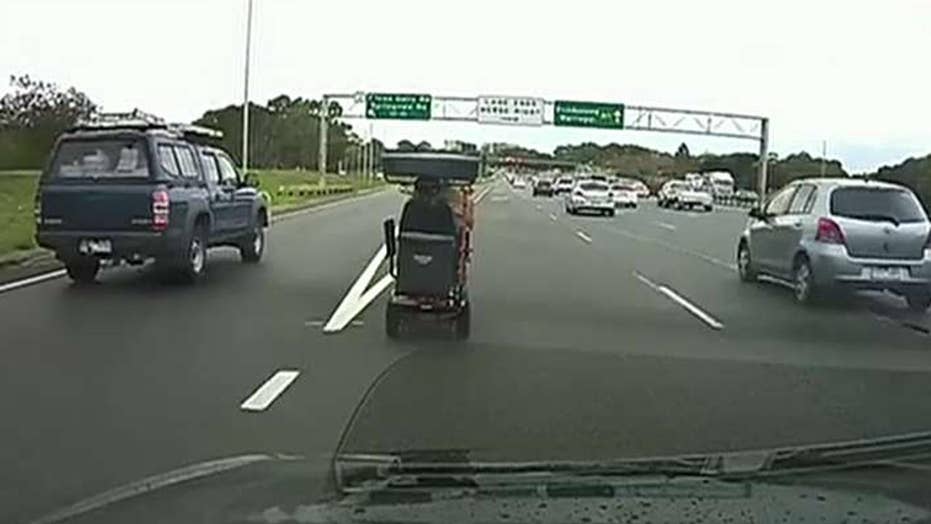 It wasn't quite "hot wheels," but a 92-year-old man in Australia was captured on video Friday taking his motorized scooter onto a busy freeway as a concerned motorist tried to prevent other cars from crashing into him.

The incident happened along the Monash Freeway in the suburbs of Melbourne as motorist Bruce Bromley was entering the highway.

Bromley posted a dashcam video to Facebook as the scooter can be seen going down an entrance ramp and into travel lanes.

A 92-year-old man was seen on a dashcam video driving his mobility scooter onto a busy freeway in the suburbs of Melbourne, Australia on Friday.

The elderly man then responds angrily, yelling back at him before continuing to drive along the freeway, frequently switching between the travel lane and shoulder.

“I just told him to try and pull over and he told me to 'f--- off,'” Bruce told a police operator in the video.

After driving behind the man with his hazard lights on, a police patrol car eventually pulled up alongside the man to bring him to a stop.

Victoria Police told 9NEWS in a statement on Friday the 92-year-old man had attempted to merge into traffic in a 60 mph speed zone.

“Police quickly arrived and spoke to the Glen Waverley man and determined he had been reported missing a short time earlier by family members,” police told 9NEWS. “He was taken to Glen Waverley Police Station where he was reunited with his family.”