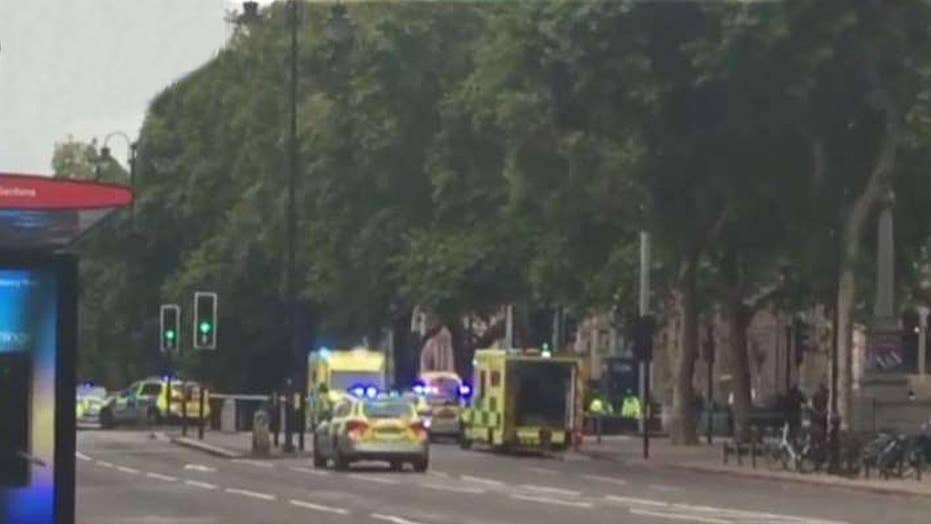 Emergency services respond to incident outside the Natural History Museum.

London police said a vehicle ramming into a crowd outside the Natural History Museum injuring a number of people Saturday was being treated as a road traffic collision, not a terror-related incident.

At least 11 people were injured - most with leg and head injuries, the London Ambulance Service said.

London’s Metropolitan Police said a man was detained at the scene and a motive was being investigated. Police confirmed they would release more information as time went on.

"The incident in Exhibition Road South Kensington earlier is not being treated as a terror-related incident. It is a road traffic collision," London's Metropolitan Police tweeted.

“It is not being treated as a terrorist incident at this stage while we establish what has happened,” a spokesperson told The Guardian.

No other information was available on the number of people injured or their condition. Emergency services were said to be on the scene outside the museum.

Metropolitan Police reported a car drove into a crowd of people outside London's Natural History Museum, injuring a number of people. (Reuters)

Witness Katie Craine said she was coming out of the museum when she saw a man in handcuffs being pinned down on the ground by police near a damaged car.

"He looked really proud of himself," she said. "He was laughing."

British police at the scene of the incident in central London, Saturday, Oct. 7, 2017. (AP)

One witness, Lesley Carter, said passersby held the man down before police arrived.

“I saw the man pinned down by about six people – one guy was trying to pin him down with his four- or five-year-old daughter in his arms,” Lesley Carter, a witness, told The Guardian.

Ambulance personnel push a woman on a stretcher at the scene of an incident in central London, Saturday, Oct. 7, 2017. (AP)

“It looked like the car had smashed into the wall between two other cars and the guy got out to run before being pinned down. Loads of people were running away and within minutes the police had turned up. It was a very quick response,” Carter said.

Maxim, another witness, told Sky News, the man was removed from his vehicle.

British Police and a forensic investigator at the scene of the incident in central London, Saturday, Oct. 7, 2017. (AP)

“They took a man on the ground, they took the man from the car and put him on the ground and then 20 minutes later evacuated the street,” he said. “There was a lot of police, I saw people running, people were panicking.”

British Prime Minister Theresa May has been briefed on the incident, Sky News reported.

May tweeted her thanks to the first responders and that her thoughts were with those who were injured.

Sadiq Khan, London’s mayor, tweeted his statement regarding the incident.

“A number of people have been injured in an incident involving a car in Exhibition Road, South Kensington. A man has been detained by police,” the statement said.

“Details are still emerging and I have spoken with and am in close contact with Assistant Met Commissioner Mark Rowley and our other emergency services,” Khan wrote.

The BBC reported that the injuries appeared to be minor.

London's official terrorist threat level has been set at "severe," indicating an attack is highly likely after a series of terror attacks have rocked London and Manchester this year, including a vehicle attack on pedestrians at Westminster Bridge and London Bridge.