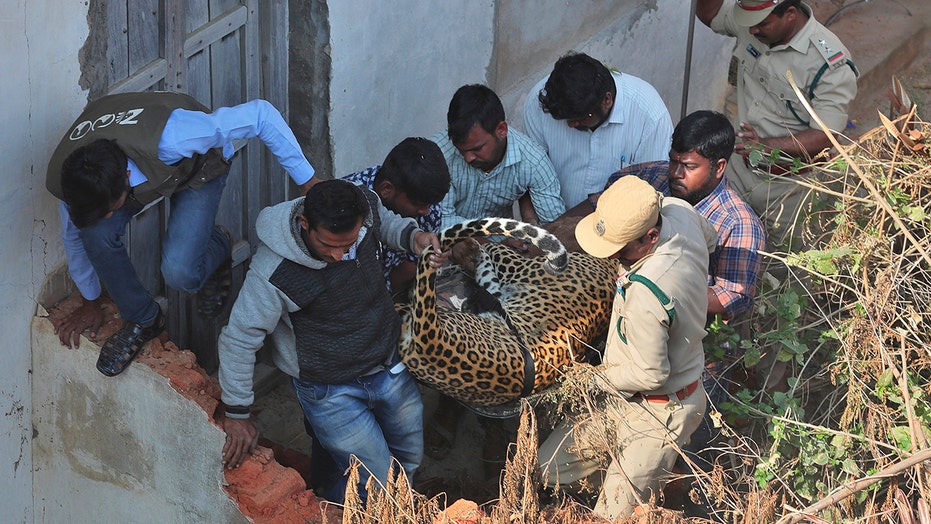 A leopard has been tranquilized and captured in southern India after it ran into a house, triggering an evacuation and frantic search for the big cat.

The leopard was believed to have come from the Kamdanam forest and ran into a house in Shadnagar town in Telangana state, said Mohammad Abdul Hakeem, a wildlife official.

Despite the evacuation orders, residents swarmed the area to take pictures and video of the big cat. At one point the animal was spotted lounging on the terrace of a house.

Residents swarmed Indian wildlife officials as they carried a tranquilized leopard to catch a glimpse of the big cat. (AP Photo/Mahesh Kumar A.)

Wildlife officials eventually caught the leopard and carried the animal to a truck through a throng of residents trying to get a look at the cat.

“The leopard was transported to the zoo, where it will be kept under observation and released back into the forests after a couple of days,” said Hakeem.

Indian wildlife officials carried a tranquilized leopard they found on the terrace of a house in Shadnagar. (AP Photo/Mahesh Kumar A.)

In India, the deadly conflict between humans and animals has increased in recent years due to shrinking forest habitats and urban expansion. According to official data, 224 people in India were killed in the last five years by tigers.

India is home to 70% of tigers in the world.