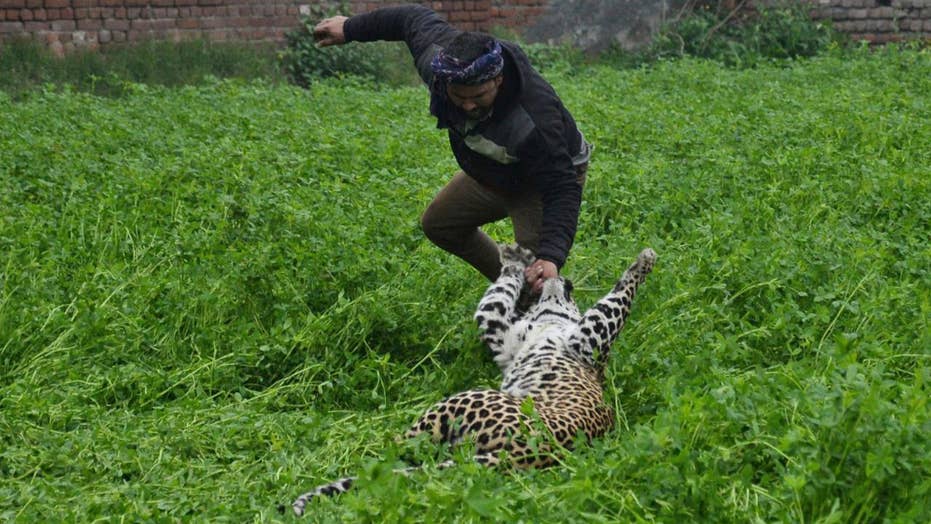 According to reports, a stray leopard found its way into a residential area in northern India and attacked four people. Residents in the city of Jalandhar notified police when they saw the large cat inside a house. When forest officials arrived, they tried to tranquilize it, but it escaped over a wall and into the village, sending locals running for their lives.

A couple captured stunning images of a rare “strawberry” leopard feasting on a dead giraffe at a South African game reserve.

Images of the leopard, named for its red-colored coat, were caught on a motion-sensitive camera set up by Alan Watson, 45, and his wife Lynsey, 41, at the Thaba Tholo Wilderness Reserve in late July. The pair pinned the camera to a tree located near a dead giraffe —  which was killed following an “intense” thunderstorm, per the UK-based outlet SWNS — in the hopes of capturing images of scavengers coming for their next meal.

The pictures are reportedly the first of a "strawberry" leopard eating in the wild, according to the Daily Mail.

THOUSANDS OF TARANTULAS SET TO CRAWL THROUGH COLORADO SEARCHING FOR MATE

"We thought we might get photos of blades of grass," Alan said of the unexpected images. (Black Leopard Mountain Lodge / SWNS)

"We thought we might get photos of blades of grass," Alan told SWNS, explaining the shock of capturing the unusual creature on camera.

“As far as I know, this is the rarest color of leopard in the world. We hope she will bring new people to the lodge,” Alan, the owner of the Black Leopard Mountain Lodge located in the reserve, added.

"A lot of people who come to spot wildlife in the area go away disappointed not to have seen a leopard. They are so well camouflaged and incredibly elusive. Even these ones, if they were going through the long grass you wouldn't see them,” he continued. "If she doesn't want to be seen, you aren't going to see her.”

The "strawberry" leopard was reportedly first discovered in 2012 when one was spotted near the border of Botswana, according to SWNS.

The cats are likely pink hued because of a genetic mutation called erythrism. The mutation, according to a 2013 National Geographic blog post, is caused by a recessive gene “similar to that which affects albino animals.”

In this case, however, the mutation results when the animal overproduces red pigments or underproduces dark pigments.

These big cats are likely pink in color due to a genetic mutation called erythrism. (Black Leopard Mountain Lodge/ SWNS)

In humans, erythrism may be responsible, at least in part, for red hair and freckles, according to the Huffington Post.

Separately, a pink grasshopper with the same mutation was recently spotted in an English garden.