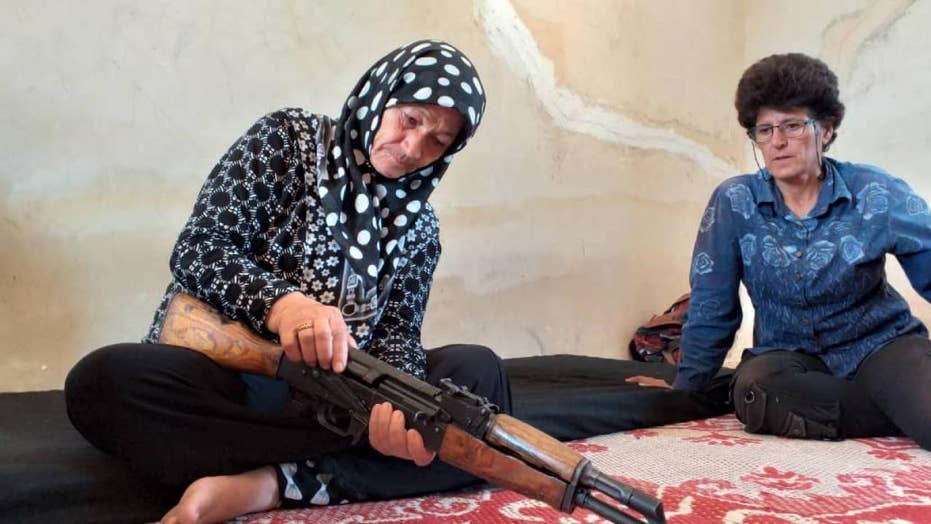 A group of Kurdish-Syrian ‘feminists’ are forming human shields to resist a Turkish incursion.

When the threat of an attack looms, scores of Kurdish women in every major township in their carved out canton of Rojava in northeastern Syria, stand shoulder-to-shoulder.

Amid a region ravaged by years of conflict and ISIS incursions, their formation is what they call their very own human shield – comprised of self-declared feminists belonging to their group called “Kongra Star” with the tagline “Woman, Life, Freedom.”

“It’s like a protest camp on the border,” one activist told Fox News. “So if Turkey attacks they have to go through civilian women first.”

A possible military incursion by Turkey was at least temporarily averted this week following three days of urgent negotiations between the U.S and Turkey in Ankara this week, which ended with the two sides agreeing to establish a “safe zone” in northeastern Syria. Turkish President Recep Tayyip Erdogan had re-ignited tensions with the U.S. after warning that his troops would be sent over the border to combat the Syrian-Kurdish forces, known as the SDF.

While Ankara views the fighters as terrorists given their ties to the Kurdish separatists' group the PKK, they are backed and armed by the United States, who utilized the SDF as the ground force in the fight against ISIS. U.S. Defense Secretary Mark Esper cautioned that any Turkish military incursion into northern Syria would be “unacceptable,” but the U.S.’s long-term position on continuing to arm and defend the Syrian militia remains unclear.

Thus the women – who number in the thousands from young to old – say they are always ready and waiting to defend, with and without arms.

“Everybody knows the political situation against us. Turkey wants to destroy the fruits of our revolution and our idea of a democratic nation,” Zehra Berkele, co-chair of the Kongra Star for the Euphrates Region, told Fox News. “So we have set up this human shield protest. We are civil people and every household here has lost someone in the fight against ISIS and other groups, every household has experienced so much pain – driven out as refugees, cities left in ruins. But with a love for our homeland, we have come together.”

She explained that while it is mostly women who take part in forming the shield, men do join at times, and each such mass protest in different parts of Rojava that vary in demographics are organized by different chapters of the group. Sometimes neighborhoods or villages “take turns” in taking part so they can always make the sure the protest is well-populated, Berkele explained.

Founded in 2005, the Kongra Star claims its central objective is “the establishment of free, democratic, ecological municipalities that are based on women’s freedom” and that they will not allow the responsibility of defending their land and people fall only to the men.

In addition to skirmishes with Turkey, the region is still beleaguered by ISIS sleeper cells and frequent attacks by jihadist outfits. In Berkele’s words, they have no choice but to take a stand.

“What we have started, we will continue. As for fear, whether we accept it or not, there is fear,” she continued. “We have strong willpower and a strong connection to our land. This protest is a call to the whole world, we don’t want another attack like Afrin. We want to be able to live.”

In early 2018, Turkish-backed forces successfully secured control of the Kurdish-dominant Syrian city of Afrin, citing the immediate need to protect its borders from PKK infiltration. The operation caused something of a schism between the SDF and U.S forces, as many SDF fighters chose to abandon the ISIS mission to protect a fight they viewed as the one closest to home – but in the end, Afrin fell.

But beyond the pillar of self-defense, Kongra Star positions itself as a feminist movement built on “the basis of women’s freedom” with education and support program aimed at strengthening women’s standing in society.

“I’m a woman, and so I experienced much pain in my life. As a movement, we take care of women in the particular basis of educating women and helping each other to stand on our own feet,” Berkele noted. “Many of us having been driven out as refugees which have created a psychological impact. But through our meetings, we are trying to bring an end to these psychological problems for women.”