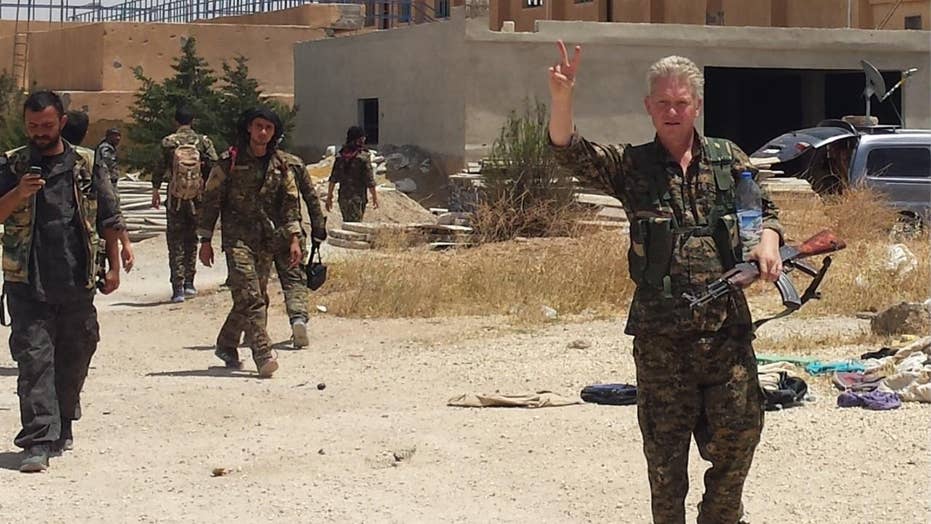 Former Hollywood actor who joined anti-ISIS fight wants to return to U.S., has been left in limbo

Hollywood actor Michael Enright, who joined anti-ISIS fight, says he agreed to share intelligence in return for being allowed back to U.S., but has been left in limbo.

As the final ISIS enclave in eastern Syria shrinks almost into non-existence – a sign that the terror group's last fragment of territorial control that once spawned large swaths of Iraq and Syria is almost over – one Western fighter, Michael Enright, who left his Hollywood career to take up arms against the brutal insurgency, says he has been left languishing without a country to safely return to.

“I always felt I owed America a debt because it had always been so good to me. I love Americans and I love America. I didn’t go (to Syria) to help the Kurds, I went there to fight for America,” British-born Enright, 55, told Fox News. “I ended up falling in love with the Kurds, but I went there for America and because of what ISIS did to Americans.”

In particular, it was the video that emerged in August 2014 of journalist James Foley being beheaded by British jihadist Mohammed Emwazi, who operated under the alias Jihadi John, that riled him enough to abandon his Los Angeles life in early 2015.

“When I first left America I knew there would be a risk I would not be able to come back, but I felt so compelled to go,” he explained. “I had first come to America when I was 19. I had no work experience and no family there, but it became my home.”

Enright said the United States served as his home for decades as he gained a foothold in Hollywood through an array of minor roles in major productions such as “Pirates of the Caribbean,” “Old Dogs” and “Agents of S.H.I.E.L.D.” But all that came to an end in November 2015 after he completed his first intense YPJ “tour” battling the burgeoning ISIS abroad and tried to enter California on its southern border with Mexico.

In this handout photo provided by Kurdish journalist Mohammed Hassan, taken on May 19, 2015, Michael Enright, center, a British actor who has had minor roles in Hollywood films, wears the Kurdish fighters military uniform after he joined them battling against the Islamic State group, near Tel Tamr town, northeast Syria. Enright, who played a deckhand in “Pirates of the Caribbean: Dead Man’s Chest,” appears in a video released by the Kurdish People’s Protection Units, known as the YPG. The video shows him in a trench with other fighters firing an assault rifle. (The Associated Press)

Enright said he was flagged entry from Tijuana for having overstayed his visa dating back to his young adult days. He said he was detained for six weeks in a cell, often referred to as a pod.

“At first they were going to do voluntary deportation, which meant I would have paid for my own flight back to the U.K. and I would have tried to work it out with the embassy,” he explained. “But when they found out I had been in Syria it wasn’t voluntary anymore and I was detained.”

According to Enright, those six weeks were the most eye-opening in his life — he said he was detained alongside around 100 other men, many of whom vowed to be “political refugees” claiming asylum all the while openly voicing support for brutal terrorist outfits and insurgencies including ISIS, Boko Haram, Al-Shabaab and the Taliban.

“There was one guy who was an Afghan pretending to be Pakistani who even told the guard that Taliban were very good and helping a lot of people,” Enright recalled, noting that he wrote about the incident to his supervisor and the facility’s psychologist, but never heard any more about it.

He said he was eventually flown back to the United Kingdom – escorted by three Department of Homeland Security (DHS) officers – and interviewed by more American officials on arrival. Enright said he remembered one official telling him that if he assisted them to “catch a bad guy,” they would allow him re-entry to the U.S.

“So the second time I went back to Syria, in June 2016, I did just that. I went searching for intelligence and interrogating ISIS prisoners and started passing along information to an American intelligence officer,” Enright said. “I passed on information about English-speaking ISIS members with their names and signatures — they were likely American, Canadian or Australian.”

Enright claimed that on the way to Syria that second time, he even dropped off an encoded SD card to an FBI officer stationed in Erbil, Iraq, that he had picked up from an ISIS house on the first tour.

However, after leaving Syria for the last time in November 2017, Enright said that despite his intel-collecting efforts, which continued even after his departure from the war-ravaged country, he is yet to be given the green light to step foot back inside the United States.

Michael Enright with two YPJ soldiers, both of who have died in the battle fighting ISIS in Syria

For the meantime, Enright said he's living in a Central American country he asked we not identify, and waiting. He stressed that, ultimately, he is banned from the U.S. not because he took up arms against ISIS but because he overstayed his original visa. He claims he was led to believe that by collecting intelligence for the U.S. he would be granted permission to return, given that he fears returning to the U.K., where there is a high probability he will be apprehended on terrorism charges.

Although the Syrian Democratic Forces (SDF), which includes YPG fighters, are supported by British and U.S. forces in the anti-ISIS fight in Syria, the issue of Brits who went to join the group on their own behalf has become a complicated political one for the U.K. government. While most countries whose foreign fighters have fled abroad to join the YPG, which is also part of the U.S.-backed SDF, don’t criminally prosecute returnees the way they would any alleged ISIS operative, the United Kingdom over the past two years has cracked them down.

The YPG and its female affiliate, the YPJ, are widely considered to be an arm of the PKK — a separatist group in Turkey that has long waged a violent war for independence with the Turkish government and is formally designated a terrorist organization in Turkey, the United States, and the European Union.

Early in his fighting tenure, Enright routinely called on the U.K. government – then led by Prime Minister David Cameron – to reverse a decision not to deploy air support to help the YPG and other anti-ISIS units in Syria and to directly arm the Kurds.

The FBI and the U.S. State Department declined to comment. DHS did not respond to a request for comment.

However, the British Home Office, which is responsible for investigating such matters, told Fox News previously that “everyone who returns from taking part in the conflict in Syria or Iraq must expect to be investigated by police to determine if they have committed criminal offenses and to ensure that they do not pose a threat to our national security.”

“UK law makes provisions to deal with different conflicts in different ways – fighting in a foreign war is not automatically an offense but will depend on the nature of the conflict and the individual’s own activities,” the spokesperson told us in 2017. “Any decision on whether to prosecute will be taken by the police and Crown Prosecution Service on a case by case basis.”

Another senior British official concurred that ultimately the police and Crown Prosecution Service (CPS) make the decision on whether or not to prosecute, but that the “U.K. has advised for some time against all travel to Syria, and against travel to large parts of Iraq.”

During his multiple “tours” as one of many YPG Western volunteers, Enright said his duties ranged from fighting on frontlines and clearing ISIS houses, to interrogating prisoners, engaging with local civilian communities and documenting battles through media and other means.

He pointed out that it was soon after Trump’s inauguration into office that he noticed the marked increase in equipment and airstrikes that they were able to significantly turn the tide in defeating ISIS.

However, in recent weeks Enright finally launched an online campaign titled “Bring Michael Home,” with testimony from U.S. Army 2 Star Major General Daniel York, in a bid to drum up support and bolster his effort to return to the U.S. homeland.

“I love America, I want to be there,” he emphasized, claiming he has been offered a job as a tech adviser for a prominent movie studio making a film about the YPG.

Mission Pictures, the studio said to be behind the forthcoming production, did not respond to a request for comment.

And despite the drama of a life in limbo, Enright insisted he has zero qualms about packing his bags for the Syrian frontier more than four years ago.

“I have no regrets whatsoever. Both times I went I bought one-way tickets because I never expected that I would make it out,” Enright added. “I love America; I would do it again.”