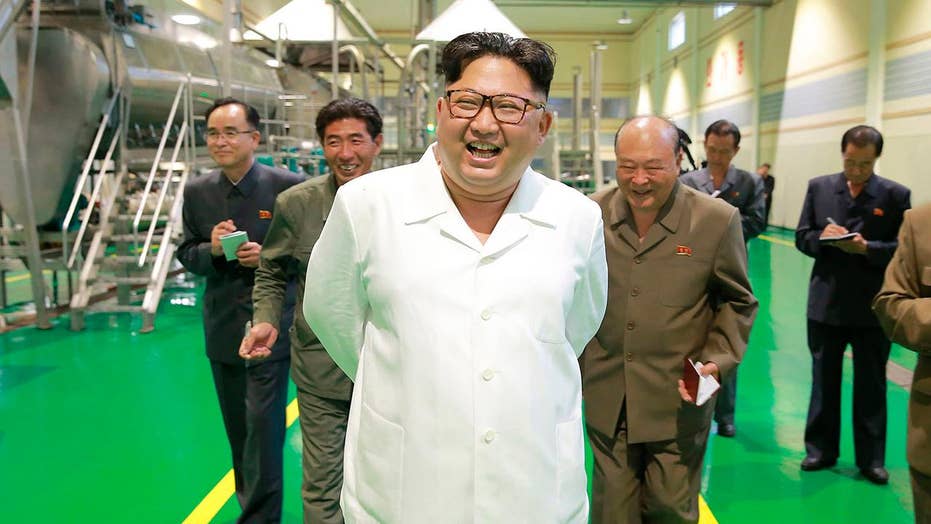 Trump confident Kim Jong Un will honor contract with US

North Korea leader Kim Jong Un launched -- not a missile -- but an unusual public attack on his own officials during inspections of several ongoing projects in the Hermit Kingdom, visits he said that left him “appalled” and “speechless” due to a lack of progress and attention to detail.

Kim’s statements, released by the state-run Korean Central News Agency on Tuesday, were made during his “field guidance” visits at construction sites in the country. The despot’s disappointment was reportedly visible during a visit to the Orangchon Power Station construction site in the northeast. After officials briefed him about the project and its delays, Kim became "extremely enraged," KCNA reported.

Kim’s late grandfather, North Korean founder Kim Il Sung, had initially given the project the green light in the early 1980s. But on Tuesday, it was only 70 percent complete.

“He reprimanded the leading officials of the Cabinet for leaving the project to the province only and not paying attention to it,” KCNA said in its statement.

Kim ordered the plant to be completed by next October.

His attacks on officials continued during a visit to Onpho holiday camp, which Kim’s father and late grandfather had been to in the past. KCNA said the North Korean leader was disgusted by the hot spring bathtubs that appeared “dirty, gloomy and unsanitary for their poor management.” Kim reportedly called the tubs “worse than fish tanks.”

The slogan in the background reads: "March toward the final victory!” (KCNA)

At a visit to Chongjin bag factory, Kim blamed the North Hamgyong Provincial Party Committee for not implementing the official policy of building a new plant.

“It offered shabby rooms of the building at the Chongjin Regenerated Fibre Factory for a bag production base and thus caused great anxiety to Kim Jong Un who came to the factory to learn about the bag production in localities,” KCNA said.

Since taking power in late 2011, Kim, 34, has promised to boost living standards. Experts believe Kim’s latest attacks on his officials are designed to show he’s focused on the country’s economy. The despot is often pictured surrounded by officials while they scrawl notes during the "field guidance."

“Kim seems to believe his country will be able to keep the balance between openness and internal reform only after improving its economic competitiveness. Thus he mentioned both severe punishment and encouragement during his field guidance trips," Yang Moo-jin, a professor of the University of North Korean Studies, told South Korea’s Yonhap News Agency.

Kim is often pictured surrounded by officials scrawling notes on a notepad. (KCNA)

Tough U.N. sanctions imposed after the regime’s nuclear and missile tests last year, however, have seemed to take a toll on the country's economy. Kim met with President Trump in Singapore in June and agreed to “complete denuclearization of the Korean Peninsula.” In exchange, Kim asked for security guarantees.