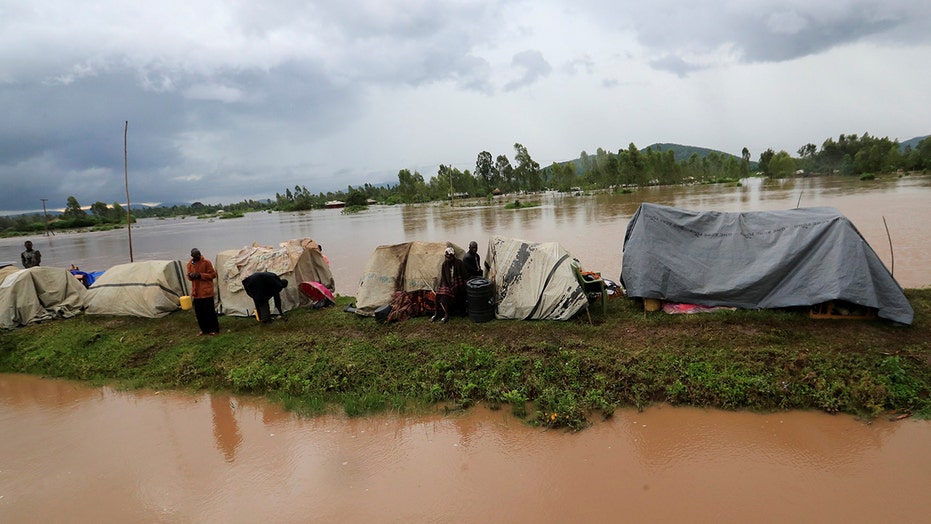 National forecast for Sunday, May 3

At least 100 are dead and nearly 2,000 are homeless after heavy rains and thunderstorms led to severe flooding and landslides across Kenya in recent days.

Eugene Wamalwa, cabinet secretary of the Ministry of Devolution, said Thursday that at least 116 people had died in the country due to the flooding, which spans across 29 counties.

“Some houses were covered by soil, while others are uninhabitable because water is seeping from underground" Kenyenya Deputy County Commissioner David Mbevi told Kenya's Daily Nation. "Trees and crops in farms have also been destroyed."

Residents carry their belongings inside flood water as they evacuate from their home after River Nzoia burst its banks and due to the backflow from Lake Victoria, in Nyadorera, Siaya County, Kenya May 2, 2020. (REUTERS/Thomas Mukoya)

Flooding along the River Nzoia also left many homes submerged, with more than 1,800 now homeless across western Kenya.

Images showed residents setting up makeshift shelters on the raised ground near floodwaters.

Residents set up makeshift shelter on a raised ground near floodwater, after they evacuated from their homes after River Nzoia burst its banks and due to the backflow from Lake Victoria, in Nyadorera, Siaya County, Kenya May 2, 2020. (REUTERS/Thomas Mukoya)

"It has been flooding for three days now; I think the government is not even aware but now we are telling them," said one resident, Vincent Ochieng, according to Sky News. "We are asking if there are any plans to assist us, only two boats are here for evacuating people."

The Kenya Red Cross has also asked county governments for additional shelters, due to concerns that coronavirus could spread due to overcrowding.

A general view shows a flooded church compound after River Nzoia burst its banks and due to the backflow from Lake Victoria, in Nyadorera, Siaya County, Kenya May 2, 2020. (REUTERS/Thomas Mukoya)

The relief agency's secretary-general, Asha Mohammed, told the Daily Nation much more needed to be done for the people affected.

"We will be doing mobile outreaches with the county department of health to provide medicines and treat minor illnesses," she said.

Additional heavy rain upstream may cause additional flooding in already besieged communities over the next week.