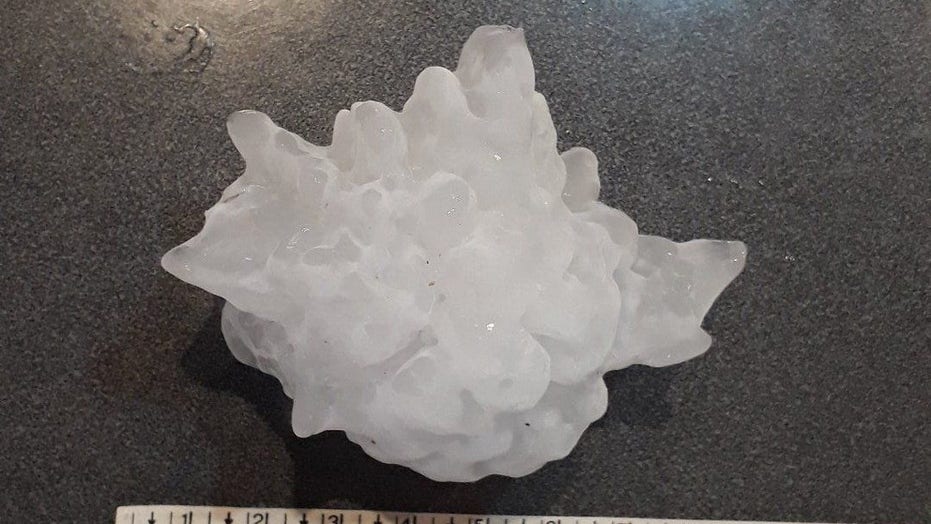 A powerful thunderstorm two years ago in Argentina didn't just pelt a city with hail, it dropped hailstones large enough to potentially set a new world record, according to researchers.

The team of researchers from Penn State University investigating the Feb. 8, 2018, storm in Villa Carlos Paz in Córdoba Province, Argentina, found that one hailstone measured between 7.4 and 9.3 inches across – considered "gargantuan" hail.

"It's incredible," Matthew Kumjian, associate professor in the Department of Meteorology and Atmosphere Science at Penn State, said in a news release. "This is the extreme upper end of what you'd expect from hail."

According to the National Oceanic and Atmospheric Administration's (NOAA) National Severe Storms Laboratory (NSSL), hail is a form of precipitation that forms inside the updrafts of thunderstorms.

Hail falls when the thunderstorm's updraft can no longer support the weight of the newly formed hailstone. When those stones fall at speeds up to 100 mph, they can damage aircrafts, homes and cars, and also be deadly to livestock and people.

A "gargantuan" hailstone that fell in Argentina in February 2018 may have set a world record, researchers from Penn State said on Wednesday. (Victoria Druetta)

The current world record belongs to a hailstone that measured 8 inches across, or about the size of a volleyball. It fell near Vivian, S.D., on July 23, 2010. NOAA's National Climate Extremes Committee said in 2010 that it also was the heaviest ever recorded in the U.S., weighing 1 pound, 15 ounces.

Researchers from Penn State proposed in their report that hail larger than 6 inches should be classified as "gargantuan."

"Anything larger than about a quarter in size can start putting dents into your car," Kumjian said in a news release Wednesday. "In some rare cases, 6-inch hail has actually gone through roofs and multiple floors in houses. We'd like to help mitigate the impacts on life and property, to help anticipate these kinds of events."

Scientists were able to study the well-documented incident after many residents posted photos and videos of hail falling on city streets to social media.

One year after the thunderstorm, researchers from Penn State interviewed witnesses and visited sites where the damage occurred. They collected data and analyzed radar observations. By taking measurements from photographs and videos, scientists estimated that one hailstone may have set a world record.

The scientists reported their findings in the Bulletin of the American Meteorological Society, and hope more awareness of such events could result in a better understanding of dangerous storms.

Rachel Gutierrez, a graduate student at Penn State and co-author of the paper, said the data, especially from a storm outside the U.S., is invaluable.

"There typically isn't a lot of data from storms outside the U.S.," Gutierrez said. "Having this shows us these crazy, high-impact events can happen all over the world."