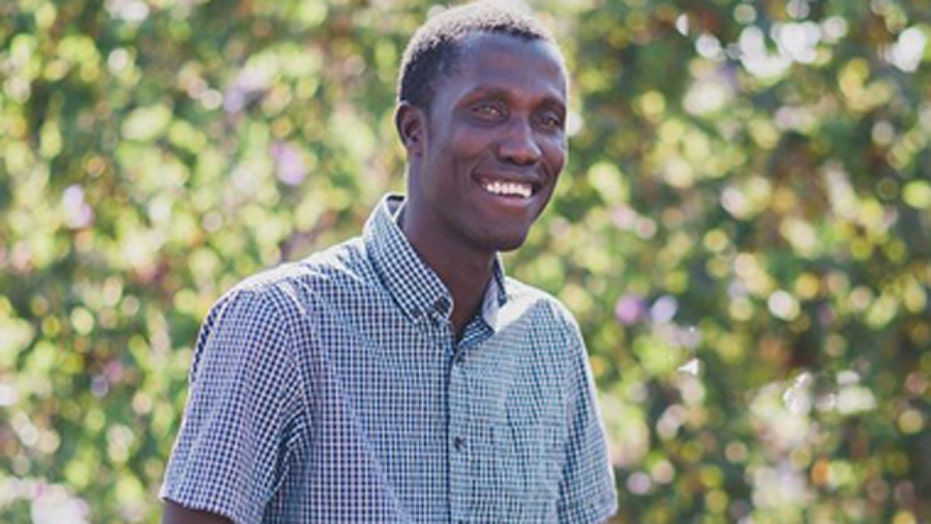 Ocitti "David" Okech was just 17 when rebels invaded his tiny village in northern Uganda, beating his father to death as he watched, taking away the rest of his family and forcing him to become one of thousands of soldiers in the army of wanted warlord Joseph Kony.

It was 2003, and Okech still vividly recalls his involuntary induction into a world of unfathomable brutality, back-breaking labor and hopeless misery. Rebels serving in Kony's Lord's Resistance Army, a violent cult that mixes a warped Christian fundamentalism with African mysticism and violence, swarmed the rural village of Pabbo. They rounded up the young -- some no more than 10 years old -- and started to break them down.

“They asked me what I valued most,” Okech told FoxNews.com. "They then killed him in front of me.”

Okech recalled that a rebel then asked him what else he valued, and he said his mother. The rebels then hauled her away.

“That is how the LRA works," he said. "They destroy everything valuable to you so you have no option. I was by myself. I felt alone. That is a powerful brainwashing for any child.”

The LRA terrorized northern Uganda, the Democratic Republic of the Congo, Central African Republic and what is now South Sudan in the 1990s and well into the last decade, initially forming during a bloody civil war for control of Uganda. Members believe Kony, one of the world's most-wanted men, is a prophet. Its influence has dwindled in recent years, with Kony in hiding, or, some believe, dead. But even as the LRA's power wanes, its legacy of a generation of thousands of mainly Ugandan children initiated into a twisted world of violence that includes rape and murder in the name of spirituality and nationalism.

For the next six months, Okech, whose two brothers were also abducted that night, traveled through the rugged jungles of Uganda, hauling cargo on his back as the rebels duplicated the horror they'd visited upon Pabbo. Okech witnessed many of his fellow captives and people from other villages murdered by the LRA.

“You didn’t know if you would make it to the next day or not,” Okech said. “Seeing people killed…it hit me the most every time I saw someone die."

Half a year into his ordeal, Okech witnessed an act so brutal he decided to risk his life to escape.

“A [captive] woman’s baby was crying," he recalled. "She was about to feed him and they grabbed the baby and slammed the child against the tree.

“I just lost my mind at that point,” he added. “If a young baby can be killed for no reason, what chance did we have?”

Okech rallied a handful of fellow captives, young men at the very crossroads of  survival, being forced closer and closer to becoming full-fledged LRA rebels.

“I said to them, ‘What about us? We have to do something,’” he recalled.

As their LRA caravan plodded through the jungle, Okech and the others made their move, running from the path as their captors shouted in alarm and sent bullets whizzing overhead. Two of Okech's friends were left behind, mortally wounded. Alone in the jungle, they continued to move, not knowing if they were being pursued.

“I thought I was going to die when I got out because I had no one," Okech said. "I had no home,” he said. “It keeps haunting me every day.”

Okech eventually made it back to Pabbo, but found himself ostracized by villagers who no longer understood or trusted him. Unable to depend on the community for protection, Okech again went on the move, traveling to various save havens and many times narrowly avoiding recapture. He was reunited with his mother but still has not found the rest of his family.

As the LRA's bloody grip on Uganda loosened, Okech went to Gulu University in northern Uganda, where, aided by a scholarship from a charity benefiting international refugees, he graduated last year with a degree. Over the last year, Okech has been working with several organizations, mentoring and counseling other youths who survived the horrors of Kony's army.

Okech is currently in the U.S. working with the advocacy group Invisible Children, which shined a light last year on the atrocities of the LRA with the viral “Kony 2012” campaign. Okech has been travelling across the U.S. with the activist group as part of their #zeroLRA campaign, speaking to students in an attempt to build even more awareness about Kony and his LRA group.

A recent report claims that attacks by the LRA have dropped by more than half since 2012, and another report from August suggests that many of the LRA combatants are becoming increasingly disillusioned with Kony due to his failure to maintain contact among the fragmented group. But Okech cautions that the LRA is still at work, and children are still being forced into murderous slavery.

“The war is still going on," he said. "Children are still being abducted and killed.”