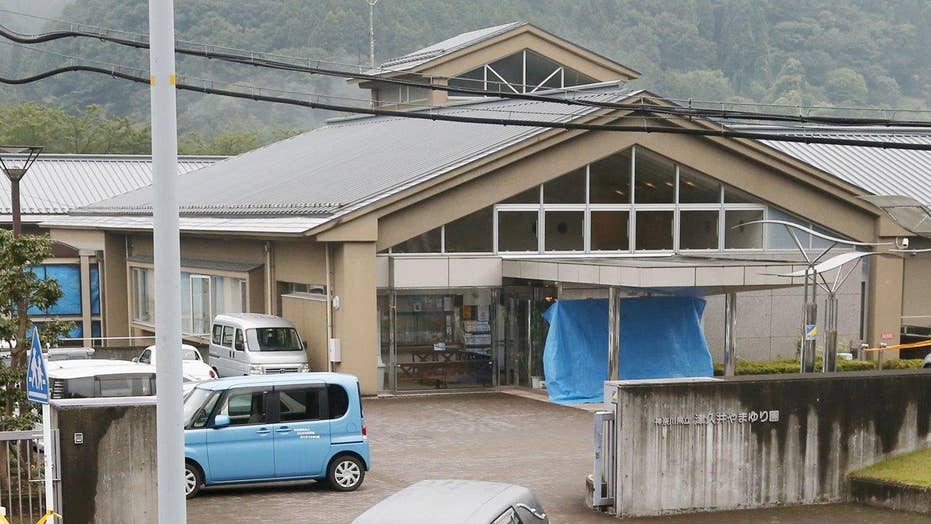 Facility for disabled target of deadly knife attack in Japan

The young Japanese man accused in the deadly stabbing rampage Tuesday at a facility for the mentally disabled reportedly wrote a letter to Parliament before the attack claiming, "all disabled should cease to exist."

Part of the letter read, "I envision a world where a person with multiple disabilities can be euthanized, with an agreement from the guardians, when it is difficult for the person to carry out household and social activities," NBC News reported. "Now is the time to carry out a revolution and make an inevitable but tough decision for the sake of all mankind."

The 40-minute attack was Japan's deadliest mass killing since the end of World War II. The fire department said 25 were wounded, 20 of them seriously.

The suspect, who had been fired from the facility, calmly turned himself in about two hours after the attack, police said.

Security camera footage played on TV news programs showed a man driving up in a black car and carrying several knives to the Tsukui Yamayuri-en facility in Sagamihara, 30 miles west of Tokyo. The man broke in by shattering a window at 2:10 a.m., according to a prefectural health official, and then set about slashing the patients' throats.

In February, Uematsu tried to hand deliver a letter to Parliament's lower house speaker that revealed his dark turmoil. It demanded that all disabled people be put to death through "a world that allows for mercy killing," Kyodo news agency and TBS TV reported. The Parliament office also confirmed the letter.

Uematsu boasted in the letter that he had the ability to kill 470 disabled people in what he called "a revolution," and outlined an attack on two facilities, after which he said he will turn himself in. He also asked he be judged innocent on grounds of insanity, be given $5 million in aid and plastic surgery so he could lead a normal life afterward.

"My reasoning is that I may be able to revitalize the world economy and I thought it may be possible to prevent World War III," the letter says.

The letter was delivered before Uematsu's last day of work at the facility, but it was unclear whether the letter played a role in his firing, or even if his superiors had known about it.

The letter included Uematsu's name, address and telephone number, and reports of his threats were relayed to local police where Uematsu lived, Kyodo said.

Details of the attack, including whether the victims were asleep or otherwise helpless, were not immediately known. Kanagawa prefecture welfare division official Tatsuhisa Hirosue said many details weren't clear because those who might know were still being questioned by police.

Uematsu had worked at Tsukui Yamayuri-en, which means mountain lily garden, from 2012 until February, when he was let go. He knew the staffing would be down to just a handful in the wee hours of the morning, Japanese media reports said.

The facility employs more than 200 people, including part-timers, with nine of them working the night of the attack, Hirosue said. All those killed were patients.

"They were working at night and got questioned by police after witnessing graphic violence, making them a little emotionally unstable now," he said.

Not much is known yet about his background, but Uematsu once dreamed of becoming a teacher. In two group photos posted on his Facebook, he looks happy, smiling widely with other young men.

But somewhere along the way, things went terribly awry.

Kanagawa Gov. Yuji Kuroiwa apologized for having failed to act on the warning signs.

Some people in the area said they were shocked that Uematsu is accused, and described him as polite and upstanding.

Akihiro Hasegawa, who lived next door to Uematsu, said he heard Uematsu had gotten in trouble with the facility, initially over sporting a tattoo, often frowned upon in mainstream Japanese society because of its association with criminal groups.

"He was just an ordinary young fellow," he said.

Yasuyuki Deguchi, a criminologist, said Uematsu's alleged actions were typical of someone who bears a grudge and seeks revenge, because it appeared he planned out the attack, and then he turned himself in to police.

"Accomplishing his goal was all he wanted," Deguchi said on TV Asahi.

Michael Gillan Peckitt, a lecturer in clinical philosophy at Osaka University in central Japan, and an expert on disabled people's issues in Japan, said the attack speaks more about Uematsu than the treatment of the disabled in Japan.

"It highlights the need for an early-intervention system in the Japanese mental health system. Someone doesn't get to that state without some symptoms of mental illness," he said.

Mass killings are rare in Japan. Because of the country's extremely strict gun-control laws, any attacker usually resorts to stabbings. In 2008, seven people were killed by a man who slammed a truck into a crowd of people in central Tokyo's Akihabara electronics district and then stabbed passers-by.

In 2001, a man killed eight children and injured 13 others in a knife attack at an elementary school in the city of Osaka. The incident shocked Japan and led to increased security at schools.

This month, a man stabbed four people at a library in northeastern Japan, allegedly over their mishandling of his questions. No one was killed.