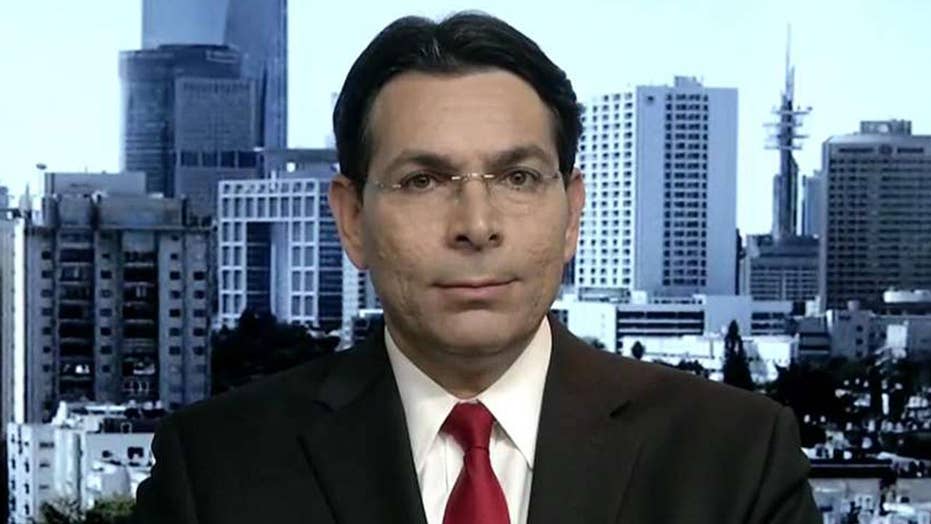 Israeli Ambassador to the U.N. Danny Danon says Israel is committed to fighting the threat in the region and appreciates the strong support from President Trump.

Israel's ambassador to the United Nations said on Monday that Iran is sponsoring terrorism in the Middle East.

"When we hear the words coming from Tehran, threatening the U.S., threatening Israel, it shows that they're panicking because the sanctions are working," said Ambassador Danny Danon on "America's Newsroom."

He condemned Gaza’s ruling Hamas militant group, saying it is responsible for instability and violence in the area.

"Hamas is using the funds that they get from the international community to dig tunnels and to produce rockets against Israel," Danon said, adding that the militant group is causing suffering to Palestinians.

Israel and Hamas are bitter enemies and have fought three wars and numerous smaller battles since the militant group seized Gaza from Western-backed Palestinian forces in 2007.

In the latest fighting, which erupted over the weekend, Palestinian militants fired hundreds of rockets into Israel, while the Israeli military responded with airstrikes on some 350 militant targets inside Gaza, including weapons storage, attack tunnels and rocket launching and production facilities.

Danon expressed gratitude for support from the Trump administration, but he assailed European officials.

"European countries called on us to show restraint," he said. "What do they expect from us? If, God forbid, you would have hundreds of rockets flying into a European capital, what would have been their reaction?"

Smoke rises from an explosion after an Israeli airstrike in Gaza City, Sunday, May 5, 2019. The Israeli military said Sunday it had responded to 450 rockets fired from Gaza with over 250 airstrikes against the besieged Palestinian enclave. (AP Photo/Hatem Moussa)

The intense fighting over the past two days came to a halt early Monday and residents on both sides went back to their daily routines. Schools and roads had been closed, and Israelis had been urged to remain indoors and near bomb shelters as intense rocket fire pounded the area.

The Israeli military lifted protective restrictions on residents in the south on Monday, while Gaza’s ruling Hamas militant group reported a cease-fire deal had been reached to end the deadliest fighting between the two sides since a 2014 war.

The escalation in recent days killed 25 on the Gaza side, both militants and civilians, while on the Israeli side four civilians were killed by incoming fire.

The Jihad militant group, which Israel accused of instigating the latest violence, confirmed that a “mutual and concurrent” truce had been brokered by Egypt. Hamas spokesman Hazem Qassem said Egyptian mediators, along with officials from Qatar and the U.N., helped reach the deal. He said Hamas could still use “different pressuring tools” to get Israel to ease a crippling blockade of Gaza.