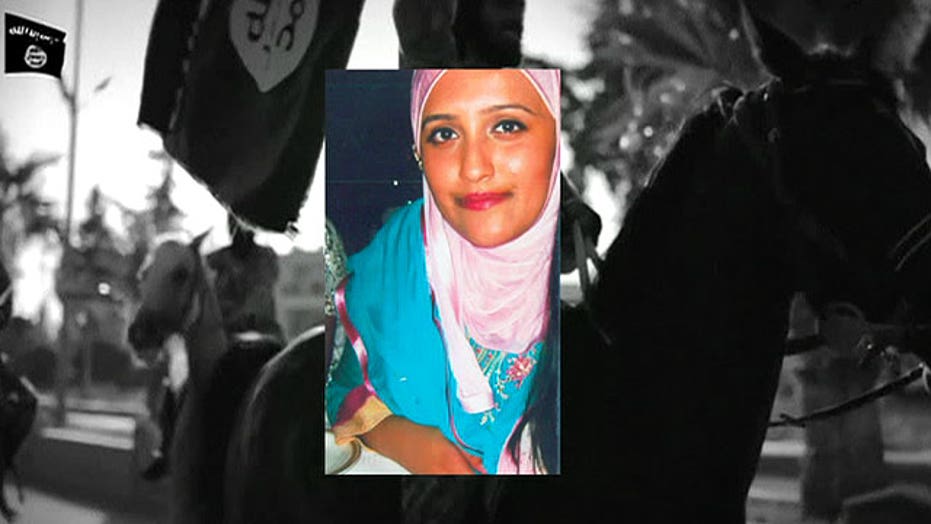 Are young Western women the new face of terror?

BAGHDAD – Islamic State group militants shot and killed 36 Sunni tribesmen, women and children in public Monday, an Iraqi official and a tribal leader said, pushing the total number of members slain by the extremists in recent days to more than 200.

Sheik Naim al-Gaoud, a senior figure in the Al Bu Nimr tribe, said the militant group killed 29 men, four women and three children, lining them up in the village of Ras al-Maa, north of Ramadi in Anbar province.

The tribal leader said that 120 families were still trapped there.

"These massacres will be repeated in the coming days unless the government and its security forces help the trapped people," al-Gaoud said.

An official with the Anbar governor's office corroborated the account of Monday's killings. He spoke on condition of anonymity as he was not authorized to brief journalists.

Some Sunnis in Anbar province supported the militants when they seized Fallujah and parts of Ramadi in December. That came after widespread Sunni protests against the Shiite-led government in Baghdad for what they described as second-class treatment.

At least 214 members of the Al Bu Nimr tribe have been killed recently by the Islamic State group. Analysts believe IS may be trying to take revenge for the tribe's siding with Iraqi security forces and, in the past, with U.S. forces. The killings are also likely intended as a warning to other Sunni tribes.

A number of Sunni tribes have played an important role in stalling the IS advance across Iraq, taking up arms and fighting alongside Iraqi security forces. A U.S.-led campaign of airstrikes is targeting the group as well, with nine strikes hitting its fighters Sunday and Monday in Beiji, Fallujah and Ar Rutbah, U.S. Central Command said.

Meanwhile, IS claimed responsibility for two bombing attacks against Shiite Muslim pilgrims that killed 23 people in Baghdad on Sunday.

In a statement, the group boasted that the bombings took place despite the tight security measures protecting the Shiites' "biggest infidel event." The attacks targeted pilgrims on their way to the holy city of Karbala to mark the Ashoura holiday.

Ashoura commemorates the 7th-century death of Imam Hussein, a grandson of Prophet Muhammad and an iconic martyr among Shiites. Sunni insurgents frequently target Shiites, whom they consider heretics.

In Washington, State Department spokeswoman Jen Psaki said the reported massacres of the Al Bu Nimr tribe and other attacks on Shiite pilgrims "proves once again that ISIL does not represent anything but its warped ideology," using an acronym for the Islamic State group.

The attacks provide "more evidence, if any were needed, why our coalition partners, including Iraqis from every background, must work together to defeat these terrorists," Psaki said Monday.

Another bomb blast on a commercial street killed three people and wounded 11 others in Baghdad's western district of Amil, police said. In the western suburbs of Baghdad, police said a roadside bomb blast struck an army patrol, killing two soldiers.

At night, police said three mortar shells landed on the edge of Baghdad's district of Khazimiyah, where thousands of Shiites are converging to mark Ashoura, killing five people and wounding 17.

Hospital officials confirmed the casualty figures. All officials spoke on condition of anonymity because they were not authorized to talk to journalists.