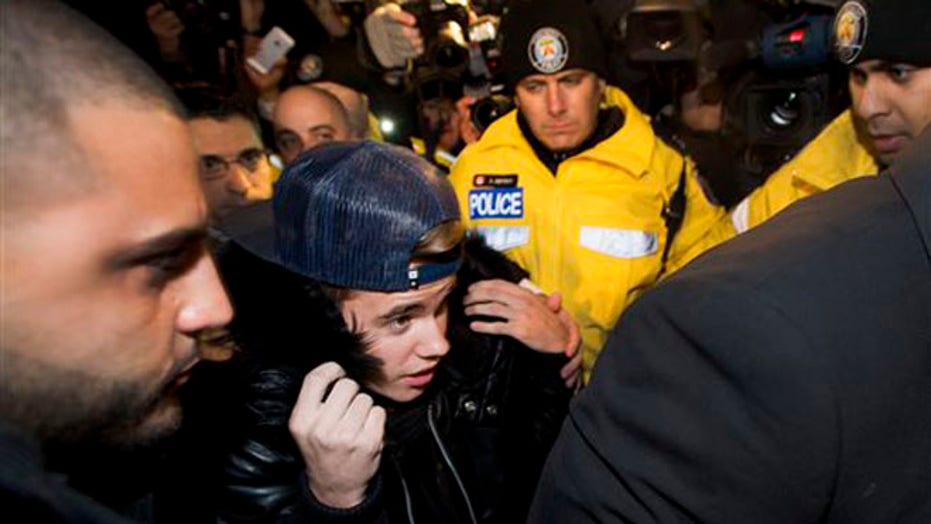 Justin Bieber turns himself in to police on an assault charge in Canada.

Who could have imagined?

The face of the immigration debate has become – for the moment, at least – pop star-bad boy Justin Bieber.

His relentless streak of police encounters in the United States (full disclosure: he’s made the acquaintance of men and women in uniform in other nations, too) has propelled The Biebs squarely into the heart of the complex, emotionally-charged matter of immigration legislation.

His apparent flouting of laws, which includes – but is not limited to – trying to make an omelet out of his neighbor’s mansion by bombarding it with eggs and drag racing while in a haze of booze, weed and narcotics, has led to a petition on the White House's "We the People" website with nearly 200,000 signatures as of Thursday calling for Bieber to be booted out of the United States, say published reports.

The White House policy regarding the website is that any petition that achieves 100,000 signatures within 30 days requires some official response.

Bieber is Canadian by birth, and is in the United States on a work visa reserved, according to the U.S. government, for people of extraordinary gifts.

The petition asking the White House to revoke Bieber’s visa and deport him reads, “We the people of the United States feel that we are being wrongly represented in the world of pop culture. We would like to see the dangerous, reckless, destructive, and drug abusing Justin Bieber deported and his green card revoked.”

“He is not only threatening the safety of our people but he is also a terrible influence on our nation’s youth. We the people would like to remove Justin Bieber from our society.”

Another petition circulating on the Web asking for Bieber to be shown the door has garnered more than 21,000 signatures.

But the still immensely popular Bieber has his defenders. Three petitions are circulating demanding that Bieber be allowed to remain in the U.S. But they have gotten about 5,000 signatures – combined.

According to Politico, the White House often doesn’t rush to respond to such petitions.

Mashable, a website that covers technology and social media, quoted an unnamed White House spokesperson as saying in an email: “Every petition that crosses the threshold will be reviewed by the appropriate staff and receive a response.”

On Thursday, TMZ reported that the toxicology report shows Bieber was on marijuana and Xanax at the time of his DUI arrest after he was caught drag racing in Miami last week.

According to the gossip website, Bieber’s urine test showed there was THC and Alprazolam (the main drug in Xanax) in his system when he was busted by cops. The singer told police he had been smoking pot all day and that his mother had given him Xanax.

While Bieber’s immigration situation is being debated in the U.S., Canada is dealing with other police issues involving its native son.

Bieber was charged with assault for allegedly hitting a Toronto limousine driver several times in the back of the head last month. The news broke just after the pop star's attorney entered a separate not guilty plea in Florida to the drunken-driving and other charges that sparked the deportation petition.

The baby-faced 19-year-old turned himself in to a Toronto police station Wednesday evening, arriving amid a crush of media and screaming fans. He was charged with one count of assault and is scheduled to appear in court in Toronto on March 10.

Police allege Bieber was one of six people who were picked up by a limousine from a nightclub in the early morning hours of Dec. 30, and there was an altercation while en route to a hotel.

Police said during the altercation one of the passengers hit the limo driver in the back of the head several times.

"The driver stopped the limousine, exited the vehicle and called police," a statement said. "The man who struck him left the scene before police arrived."

Howard Weitzman, Bieber's attorney in California, said his client is innocent and declined to comment on the allegations against Bieber or any potential defense, saying it was now a matter for the court to handle.

Earlier on Wednesday, Bieber pleaded not guilty in Florida to charges of driving under the influence after driving nearly twice the speed limit on a Miami Beach street. He also pleaded not guilty to resisting arrest and driving with an expired license.

Bieber and R&B singer Khalil Amir Sharieff were arrested last week in Miami Beach during what police described as an illegal street drag race between a Lamborghini and a Ferrari. Neither has been charged with drag racing, which is a crime in Florida.