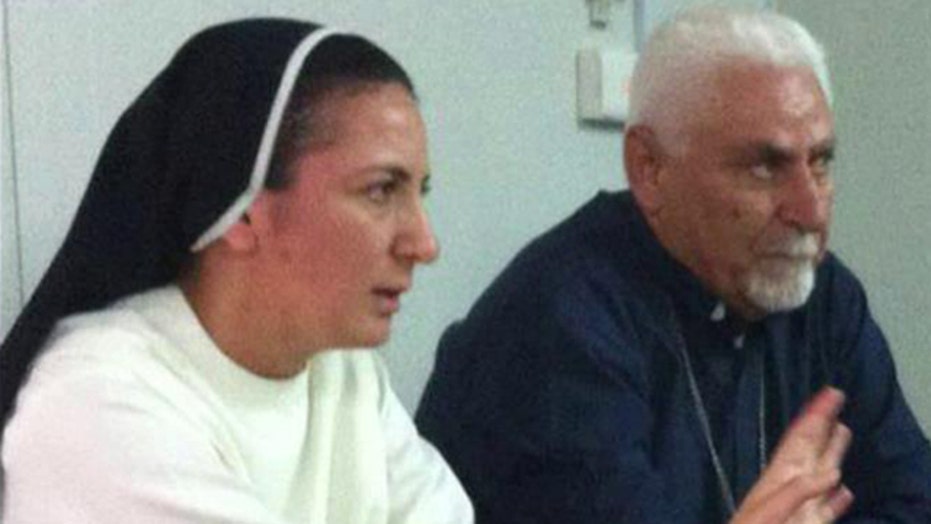 Threatened nun in Iraq refused Visa by US government

Religious freedom advocates rejoiced Friday when the State Department reversed a controversial decision denying a visa for an Iraqi Catholic nun who sought to tell Americans about ISIS’ violent persecution of Christians.

Sister Diana Momeka is a leading representative of the Nineveh Christians who have been killed and chased from their homes in and around Mosul by ISIS.Momeka, who has been likened to Mother Teresa for her work with the poor and persecuted, was turned down, she said, because she was "internally displaced" in Iraq, and deemed a risk to stay in the U.S., where she once lived and studied for six years. Ironically, her displacement came at the hands of ISIS, and is the very subject she hopes to discuss during her trip.

“We’re very grateful to the Department of State and happy for Sister Diana.”

“That really hurt,” Sister Diana told Nina Shea, director of Hudson Institute’s Center for Religious Freedom, in a phone interview after the visa was denied.

Now that her visit is back on, Sister Diana plans to come to Washington later this month to meet with the Senate and House foreign-relations committees, the State Department, USAID and various NGOs to describe the atrocities in her area.

“We’re very grateful to the Department of State and happy for Sister Diana,” Sabatier said.

Every member of an Iraqi delegation of minority groups-- including representatives of the Yazidi and Turkmen Shia religious communities-- was granted a visa to attend official meetings in Washington to report on the situation of Christians in Iraq, except for Sister Diana, a religious freedom advocate said in a National Review report.

The State Department declined to comment on the case.

“All visa applications are adjudicated on a case-by-case basis in accordance with the requirements of the Immigration and Nationality Act and other applicable laws,” a State Department spokesman told Fox News.

Sister Diana's supporters said they have been notified that the agency has made right what they considered a shocking mistake.

Shea, in an opinion piece for the National Review, said that Sister Diana spoke to Christopher Patch, an officer with the U.S. consulate in Erbil about her status. The nun said Patch explained that she had been classified as an internally displaced person (IDP,) who was perhaps more likely to overstay a visa and settle illegally in the U.S. Once here, she could also be at risk of claiming political asylum, he said.

Sister Diana had multiple documents vouching for her and the temporary nature of her visit, to support her application. A letter from her prioress, Sister Maria Hana, attested that the nun has been gainfully employed since last February with Babel College for Philosophy and Theology in Erbil, and is contracted to teach there in the 2015–16 academic year. Erbil, some 60 miles east of Mosul, has remained safe from ISIS.

She submitted an invitation from her sponsors, the Institute for Global Engagement and 21st Century Wilberforce Initiative, headed by former Republican Congressman Frank Wolf. She also had an endorsement letter from Rep. Anna Eshoo, D-Calif.

Last week, American advocates for Middle Eastern Christians loudly objected to the State Department’s decision and alerted the media and religious freedom groups to draw attention to what they believed was a huge mistake.

Their message was received and a spokesperson for the 21st Century Wilberforce Initiative said Sister Diana received a call Friday morning from the U.S. consulate approving her visa.

“Her testimony will be important because she represents and speaks for a large group, and is directly affected by what’s going on in her community,“ Sabatier said.

Johnnie Wolfe-- the author of the book “Defying ISIS,” and co-founder of The Cradle Fund, which supports religious freedom—had been advocating for Sister Diana since her visa was denied.

“People across the country raised a voice, including members of Congress and Senators, to put enormous pressure to change the decision. I’m glad she will be able to come and speak to leaders and the press, but it’s frustrating that it took thousands of Americans reacting in a significant way to make a sensible thing happen,” Wolfe told Fox News.

The Sister’s order-- the Dominican Sisters of Saint Catherine of Siena-- has an established, 150-year-old presence in Iraq and is committed to supporting the remaining displaced Christians there. Christians across Iraq have been increasingly threatened by Islamic State militants trying to seize territory in the northern and western parts of the country and demanding strict Islamic rule.

Sister Diana—an English-speaking aid worker who has been a victim of ISIS violence—is an ideal witness for meetings on the persecution of Christians in Iraq. She and 50,000 other, mostly Christian, residents, fled from ISIS in August. Since then, she has served as a spokesperson for her community, and the more than 100,000 other Christians driven into Kurdistan by ISIS militants.

“As an educated health professional and aid worker, Sister Diana has credibility and respectability. She’s been on the ground. She didn’t ask to be the voice of the minorities there, but she has become that voice,” Sabatier said.