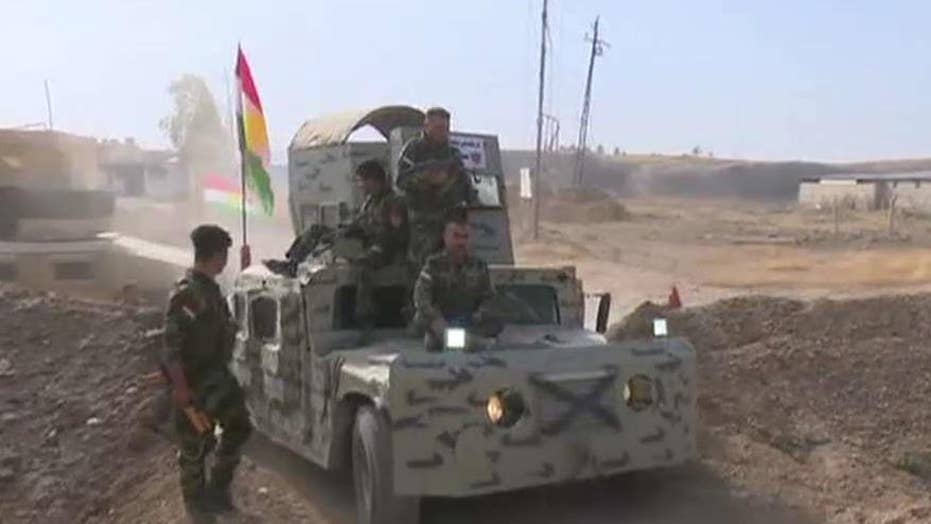 MOSUL, Iraq – The Iraqi army said Sunday that troops have driven Islamic State militants out of the town of Nimrud, south of Mosul, near the site of famed ancient Assyrian ruins that were reportedly destroyed by the extremists.

Iraq's special forces meanwhile battled militants in the city of Mosul itself, where they struggled to advance against waves of suicide car bombs.

Troops are converging from several fronts on Mosul, Iraq's second-largest city and the biggest urban area under IS control, as part of an offensive launched last month. The special forces have advanced the furthest so far, and hold a handful of districts on the city's eastern edge.

The commander of the Mosul operation said troops took Nimrud, some 19 miles (30 kilometers) to the south, after heavy fighting. It was unclear if they had liberated the nearby 13th-century B.C. archaeological site.

"The 9th division of the Iraqi army has liberated the town of Nimrud completely and raised the Iraqi flag over its buildings after the enemy suffered heavy casualties," Lt. Gen. Abdul-Amir Raheed Yar Allah said in a statement.

The late 1980s discovery of treasures in Nimrud's royal tombs was one of the 20th century's most significant archaeological finds. The government said militants, who captured the site in June 2014, destroyed it the following year using heavy military vehicles.

In Mosul itself, the special forces say they have cleared the Qadisiya and Zahra neighborhoods, and are planning to advance further in the coming hours. Over the past week they have inched forward slowly, trying to avoid casualties among their troops and civilians as suicide bombers in armor-plated vehicles rush forward from hiding spots among densely populated areas.

"The only weapons they have left are car bombs and explosives," said Iraqi special forces Maj. Gen. Sami al-Aridi as he radioed with commanders in the field. "There are so many civilian cars and any one of them could be a bomb," he said.

Troops were building berms and road blocks to prevent car bombs from breaching the front lines. Since last week's quick advance into Mosul proper, they have struggled to hold territory under heavy IS counterattacks.

Several suicide car bombers attacked the advancing special forces on Saturday, wounding around a dozen troops, three civilians, and killing a child, officers said. They spoke on condition of anonymity because they weren't authorized to brief reporters.

The Iraqi armed forces do not release official casualty figures, but field medics have noted dozens of killed and wounded since the operation to liberate the city began on Oct. 17.

Meanwhile, a leading U.S.-based rights group released a report alleging that security forces of Iraq's regional Kurdish government had routinely destroyed Arab homes and even some whole villages in areas retaken from the Islamic State group over the past two years.

The Human Rights Watch report said that between September 2014 and May 2016, Kurdish forces advancing against IS destroyed Arab homes in disputed areas of Kirkuk and Ninevah provinces, while Kurdish homes were left intact. It says the demolitions took place in disputed areas in northern Iraq which the Kurds want to incorporate into their autonomous region over the objections of the central government.

Sunni Arab politicians have previously accused the Kurds of seeking to recast the demographics of mixed areas in northern Iraq. The struggle is particularly intense in the oil-rich Kirkuk region.

All sides fighting in the battle for Mosul have been accused of human rights abuses, with the worst allegations focusing on IS.

Kurdish forces have been accused of destroying Arab homes before, with a report last year by Amnesty International alleging that the peshmerga carried out the attacks in retaliation for what they said was the Arab communities' support for IS.

Kurdish authorities say they abide by human rights laws and deny having any strategy to destroy homes. But they say some villages in which the population fought alongside IS have suffered extensive destruction because of the ferocity of the battles.

Kurdish officials could not be immediately reached for comment on the fresh allegations.