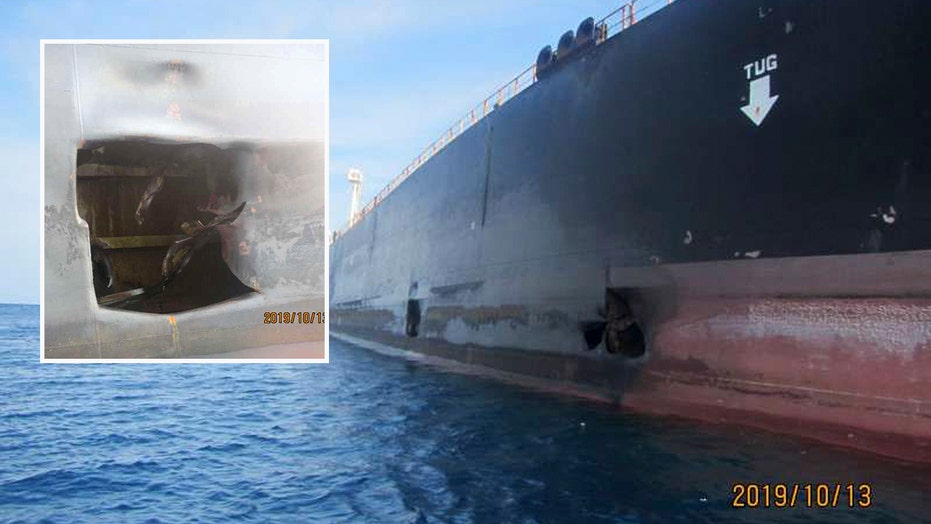 Images released Monday showed a pair of gaping holes in the hull of an Iranian oil tanker that Tehran says was hit by two missiles off the coast of Saudi Arabia in a mysterious attack last week that threatened to ratchet up tensions even more between the regional adversaries.

Iran’s Oil Ministry released photos of the Sabiti, a tanker owned by the National Iranian Oil Company, with two square-shaped apparent areas of impact just above the waterline.

Iran said Friday the ship was targeted in a missile attack, a claim that has yet to be corroborated. Saudi Arabia has denied involvement in the incident, and no one has taken responsibility.

Iranian state television reported the alleged attack resulted in an oil leak, which they say was later plugged. (SHANA via AP)

Iranian state television reported at the time that explosions damaged two storerooms aboard the oil tanker and caused an oil leak into the Red Sea near the Saudi port city of Jeddah. The leak was later plugged, Islamic Republic News Agency (IRNA) reported.

US TO SEND 1,800 TROOPS, DOZENS OF FIGHTER JETS TO SAUDI ARABIA AMID IRAN TENSIONS

An apparent oil slick trailing behind the ship had been broadcast on Saudi-owned satellite news channel Al Arabiya.

Iranian officials later said the Sabiti was returning to the Persian Gulf. They didn’t address the oil spill.

Iran's President Hassan Rouhani warned Sunday it would be "a big mistake" to think his country won't respond to threats after the alleged attack.

The alleged attack happened 60 miles off the coast of Saudi Arabia in the Red Sea. (SHANA via AP)

"If a country thinks that it can create instability in the region without getting a response, that would be a sheer mistake," Rouhani said, without pinning the blame on any specific country.

There's been intense friction for months between the Islamic Republic and the Kingdom -- and proxies for the two Muslim nations -- culminating in a Sept. 14 attack on key Saudi oil infrastructure. The U.S. has blamed Iran for the attack, which halved the Kingdom's oil production, though Tehran has denied responsibility.

The Pentagon announced Friday roughly 1,800 U.S. service members, as well as several dozen fighter jets and other air defense implements, will be sent to Saudi Arabia to help protect the Kingdom.