Secretary of State Mike Pompeo called on the international community to join him Saturday in condemning Iran for drone attacks on two Saudi oil facilities, which he described as "an unprecedented attack on the world’s energy supply."

"Tehran is behind nearly 100 attacks on Saudi Arabia while [President Hassan] Rouhani and [Foreign Minister Mohammad] Zarif pretend to engage in diplomacy," Pompeo tweeted, referring to the nation's president and foreign affairs minister. " ... There is no evidence the attacks came from Yemen."

"The United States will work with our partners and allies to ensure that energy markets remain well supplied and Iran is held accountable for its aggression," Pompeo concluded.

According to multiple news reports that cited unidentified sources, the drone attacks affected up to half of the supplies from the world's largest exporter of oil, though the output should be restored within days. It remained unclear if anyone was injured at the Abqaiq oil processing facility and the Khurais oil field.

Sen. Chris Murphy, D-Conn., who sits on the Senate Foreign Relations Committee, denounced Pompeo's description of the attack, calling it an "irresponsible simplification."

Saturday's attack comes after weeks of similar drone assaults on the kingdom's oil infrastructure, but none of the earlier strikes appeared to have caused the same amount of damage. The attack likely will heighten tensions further across the Persian Gulf amid an escalating crisis between the U.S. and Iran over its unraveling nuclear deal with world powers. 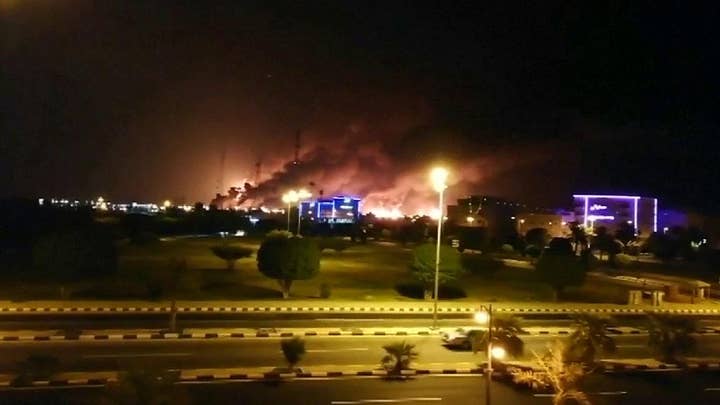 In a short address aired by the Houthi-controlled Al-Masirah satellite news channel, military spokesman Yahia Sarie said the rebels launched 10 drones after receiving “intelligence” support from those inside the kingdom. He warned that attacks by the rebels would only get worse if the war continues.

"The only option for the Saudi government is to stop attacking us," Sarie said.

The rebels hold Yemen's capital, Sanaa, and other parts f the Arab world's poorest country. Since 2015, a Saudi-led coalition has fought to reinstate the internationally recognized Yemeni government.

Martin Griffiths, the United Nations Special Envoy for Yemen, called the strikes "extremely worrying" and urged "all parties to prevent such further incidents, which pose a serious threat to regional security, complicate the already fragile situation and jeopardize [the] UN-led political process."

Trump called Saudi Arabia's Crown Prince Mohammed bin Salman in the wake of the drone strikes and expressed the United States' readiness to cooperate with the kingdom in supporting its security and stability, according to a news release from the Saudi Embassy in Washington. Trump said recent attacks against Saudi state-run oil facilities have had a negative impact on the U.S. and global economies.

The White House readout of the same call said the president spoke to the crown prince to "offer his support for Saudi Arabia's self-defense.