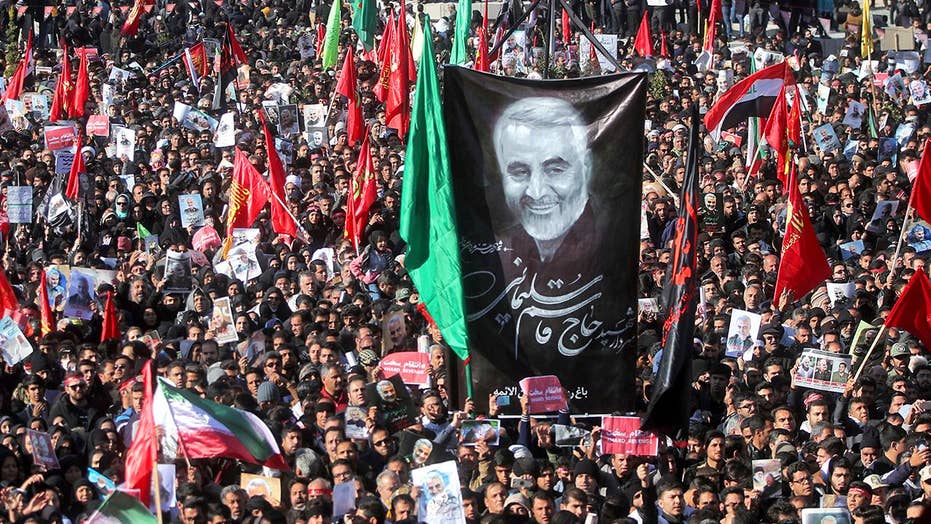 Trey Yingst reports from Baghdad on the latest threats against the U.S. coming from the Iranian regime.

The leader of Iran's Revolutionary Guard on Tuesday threatened to "set ablaze" places supported by the United States over the killing of a top Iranian general in a U.S. airstrike in Baghdad last week, prompting a crowd of supporters to cry “Death to Israel.”

The latest threat came shortly after a report indicated that Israeli Prime Minister Benjamin Netanyahu is working on distancing Israel from the U.S.-led airstrike that killed Gen. Qassem Soleimani. Netanyahu told Security Cabinet ministers that the attack “is a U.S. event, not an Israeli event, and we should stay out of it," according to a report in Axios.

NETANYAHU SAYS ISRAEL SHOULD 'STAY OUT' OF FALLOUT FROM US KILLING OF SOLEIMANI, PER REPORT

Hossein Salami, the leader of the Revolutionary Guards, made the pledge before thousands gathered in a central square in Kerman, Soleimani's hometown.  Mourners dressed in black and carried posters bearing the image of the former head of the Islamic Revolutionary Guard Corps' elite Quds Force, who along with Abu Mahdi al-Muhandis, the deputy commander of Iran-backed militias known as the Popular Mobilization Forces, and five other people were killed in the U.S.-led airstrike near the Baghdad International Airport in Iraq last week.

“We will take revenge. We will set ablaze where they like,” Salami told the crowd, drawing the cries of “Death to Israel!”

Netanyahu issued a statement with brief congratulatory remarks last week to President Trump after reports of the killing. A former chief of Iran’s elite Revolutionary Guards said Sunday the Israeli city of Haifa and Israeli military centers would be included in Tehran’s retaliation for Soleimani's death, according to Reuters.

In a rare appearance before Iran’s National Security Council Monday, Ayatollah Ali Khamenei said any retaliatory attack on American interests in the Middle East should be carried out openly by Iranian forces themselves, the New York Times reported, citing three Iranians familiar with the meeting. The bold order deviates from Iran’s usual tactic of hiding behind proxies in the region.

Mourners surround a truck carrying the flag draped coffins of Gen. Qassem Soleimani and his comrades in the holy city of Qom south of the capital Tehran, Iran, Monday, Jan. 6, 2020. (Amir Hesaminejad/Tasnim News Agency via AP)

Khamenei openly wept over Soleimani’s casket Monday as a crowd said by police to be in the millions filled Tehran streets to mourn over the man viewed as a national hero.  His slaying already has pushed Tehran to abandon the remaining limits of its 2015 nuclear deal with world powers as his successor and others vow to take revenge. In Baghdad, the parliament has called for the expulsion of all American troops from Iraqi soil, something analysts fear could allow Islamic State militants to mount a comeback.

Iran's parliament, meanwhile, passed an urgent bill declaring the U.S. military's command at the Pentagon in Washington and those acting on its behalf “terrorists," subject to Iranian sanctions. The measure appears to mirror a decision by Trump in April to declare the Revolutionary Guard a “terrorist organization.”

After a public funeral procession in Tehran that continued into  Iran’s holy city of Qom, where another massive crowd turned out, Soleimani's remains and those of the others killed in the airstrike were brought to a central square in Kerman, a desert city surrounded by mountains that dates back to the days of the Silk Road where he will be buried later on Tuesday.

Fox News' Vandana Rambaran and the Associated Press contributed to this report.