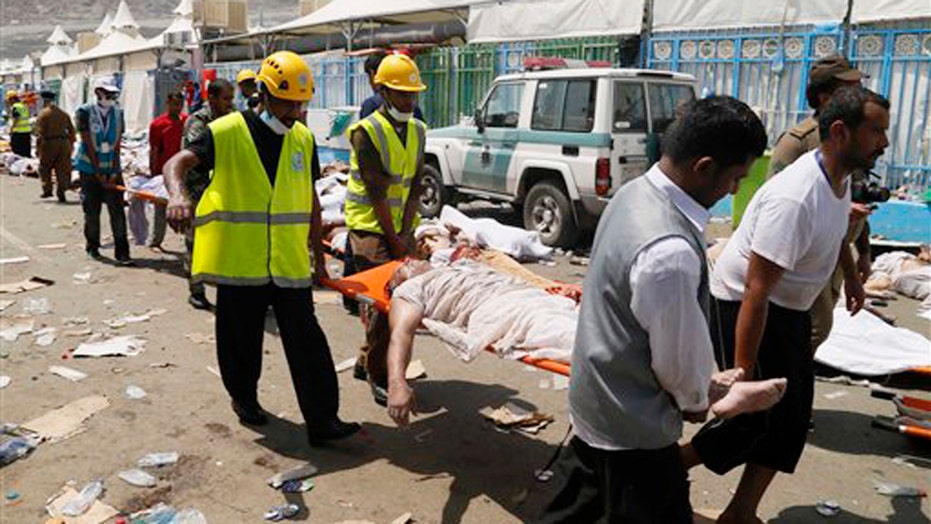 More than 700 killed in crush; witness says pilgrims were climbing over each other just to get a breath of air

Iran ratcheted up blame on archrival Saudi Arabia on Friday over the disaster at the hajj the previous day that killed more than 700 pilgrims, as Muslims solemnly resumed the final rites of the annual pilgrimage in the kingdom.

Thousands protested in the streets of Tehran as a senior cleric angrily demanded Saudi Arabia hand over control of the annual pilgrimage to the Organization of Islamic Cooperation, the world's largest body of Muslim nations.

For its part, the OIC said it supported Saudi Arabia's efforts of keeping some 2 million pilgrims safe in the annual hajj that all able-bodied Muslims must perform once in their lifetime. However, the protests and the tensions show the deep tensions between the Sunni kingdom and the Shiite powerhouse.

Saudi authorities are investigating what sparked Thursday's disaster in Mina, about 3 miles from Mecca. Initial reports suggested two crowds coming from opposing directions converged on an intersection, which began pushing and shoving until a stampede began.

As of late Thursday, the Saudi civil defense directorate said the death toll was 719, but that it probably would rise as bodies continued to be counted and sent to the morgue. At least 863 people were injured, the directorate said.

Countries around the world began reporting on casualties and their missing, including Pakistan, which said at least 236 of its pilgrims were unaccounted for on Friday. Egypt's Religious Endowments Minister Mohammed Mokhtar Gomaa told the state-run MENA news agency the death toll for his country had risen to 14.

India said at least 14 of its citizens died in the crush, which also claimed the lives of at least four Turks, three Indonesians, three Kenyans and seven Pakistanis. Authorities in West Africa said 30 pilgrims from Mali and five from Senegal also died.

Among all those countries, Iran immediately appeared to be hardest hit, saying 131 of its pilgrims died and 85 were injured. In Tehran on Friday, thousands of angry protesters Saudi Arabia's rulers, chanting "death to the al-Saud family." Iranian state television showed similar protests in several other Iranian cities.

Ayatollah Mohammad Emami Kashani, a senior cleric in Tehran, called for the OIC to take over administration of the hajj.

"The Saudi government and authorities involved in hajj should appear before court and be held accountable," Kashani said. "They should not lie and say, `It was because this or that, the weather was hot, it was the pilgrims' faults.'"

However, Iyad Madani, the secretary-general of the 57-nation OIC, supported the Saudi efforts in the statement Friday.

Madani "expressed hope that no party would seek to take advantage of the pilgrimage and pilgrims, and the incidents that might happen when these crowds of millions perform the same rituals at the same time, in a controversial context that would divide rather than unite," the statement read.

Iran and Saudi Arabia are chief rivals in the greater Middle East. That conflict is on display in Yemen, where a Saudi-led coalition is bombing Shiite rebels there Iran has backed.

The hajj pilgrimage is a main pillar of Islam. This year, around 2 million people from more than 180 countries took part in the five-day pilgrimage, which ends Saturday. The mood remained somber despite the hajj coinciding with Eid al-Adha, a major Islamic holiday.

"Yesterday's stampede was a catastrophe. We were shocked, but we can do nothing, this was their fate," said Lolo Omar, a pilgrim from Eritrea, speaking near the site of the disaster in Mina. "We wish that Allah will facilitate our pilgrimage."

Omar, like the pilgrims involved in Thursday's disaster, was headed toward a complex housing three columns that pilgrims pelt with pebbles in a symbolic stoning of the devil. Muslims believe the Prophet Ibrahim, or Abraham as he is known in the Bible, was confronted in this spot by the devil.

Egyptian survivor Wael Abdullah said he just had reached Mina on Thursday when he saw people pushing and shoving to get past one another down one of the narrow streets. People tripped over those in wheelchairs, who also fell to the ground.

"I saw people falling on the ground, other people trampling them ... and the situation was out of control," he said.

The street where the incident took place is about 36 feet wide and lined with barricades, behind which are some of the tents of hajj tour groups, organized by nationality.

Saudi King Salman has ordered the formation of a committee to investigate the incident.

Hours after the stampede, Iran's Supreme Leader Ayatollah Ali Khamenei, urged Saudi authorities to accept their responsibility for the tragedy, saying it was caused by "mismanagement."

Khamenei offered his condolences to families and relatives of the victims and announced a three-day mourning period in Iran.

Iran's deputy foreign minister, Hossesin Amir Abdollahian, told the official IRNA news agency that his ministry summoned the Saudi envoy to Tehran on Thursday for an official protest over what he called the "inadequate performance of Saudi authorities" in the incident.