Divers still looking for the second box that records cockpit audio; Benjamin Hall reports on the latest in the investigation.

Indonesian navy divers on Thursday recovered the flight recorder of the 2-month-old Lion Air jet that crashed into the sea minutes after takeoff earlier this week, killing all 189 passengers and crew members on board.

Two navy divers found the flight recorder at the bottom of the Java Sea and swam it to a ship on the surface. The bright orange device was seen on TV being placed inside a large container.

"I was desperate because the current below was strong but I am confident of the tools given to me," said navy 1st Sgt. Hendra, who uses a single name. After narrowing the possible location, "I started digging and cleaning the debris until I finally found an orange object," he said.

Special ships and remotely operated underwater vehicles had been deployed following Monday's crash to search for the plane's hull and flight recorders.

The navy said the aircraft’s fuselage was also seen on the seafloor during recovery of the device, about 1,640 feet northwest of where the plane lost contact with air traffic personnel and at a depth of nearly 100 feet. 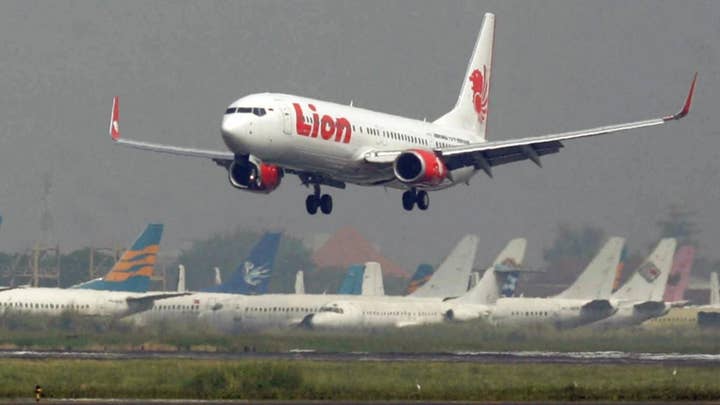 The Boeing 737 MAX 8 plane crashed 13 minutes after taking off. The pilot had requested clearance to return to the airport just 2-3 minutes after departing. Data from flight tracking website FlightRadar24 shows an increase in speed and decrease in altitude at last transmission.

The plane had reported airspeed indicator problems during a flight the day before the crash. On that flight, the jet displayed unusual variations in altitude and airspeed in the first several minutes of flight, Reuters reported.

A member of National Transportation Safety Committee holds the flight data recorder from the crashed Lion Air jet  on board of a research ship Baruna Jaya anchored in the waters of Tanjung Karawang, Indonesia on Thursday. (AP Photo/Fauzy Chaniago)

While the data from flight-tracking sites has been released, safety experts warn that it must be checked against the data from the recovered flight recorder to determine its accuracy.

Investigators said a preliminary report into the accident could be released within a month but complete findings will take several months more.

"We will process the data contained in this FDR as part of the investigation process to find out the cause of the crash," said Bambang Irawan, an investigator with the National Transport Safety Commission. "We cannot say how long it takes to process data in a black box, but of course we will try as soon as possible."

The crash marks Indonesia’s worst airline disaster since 1997 and has renewed safety concerns over the country’s quickly expanding aviation industry.