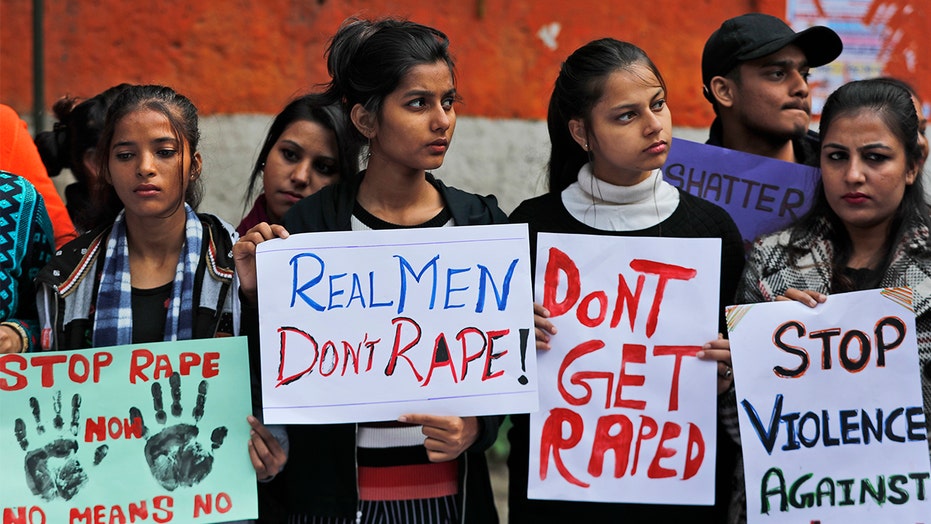 An Indian woman was set on fire on her way to testify against two men who allegedly raped her, according to reports.

In the city of Unnao in Uttar Pradesh, five men dragged the 23-year-old into a field, doused her in oil and lit her on fire. She’s in a Lucknow hospital in critical condition with 90 percent of her body covered in burns.

Two of the men involved were her alleged rapists, police said, according to the BBC. Another of the accused rapists was out on bail and the other had been on the run from police. Charges were filed against the men in March.

The woman was about to enter a railway station when the men grabbed her.

The woman will soon be airlifted to the capital of Delhi for better medical care.

Women activists hold banners and participate in a protest demanding justice in the case of a veterinarian who was gang-raped and killed last week, in New Delhi, India, Tuesday, Dec. 3, 2019.  (AP Photo/Manish Swarup)

Police said the woman had been in a relationship with one of her attackers last year. He reportedly promised marriage, physically exploited her then raped her with another friend, according to The Guardian.

Many were outraged that one of the alleged rapists had been released on bail.

“Extremely sad and shocked to hear that the Unnao rape victim was burnt earlier this morning. If the culprits were not shielded and prosecuted on time this wouldn’t have happened. Complete state of lawlessness in the state of Uttar Pradesh,” said Supriya Sule, a member of parliament for the Nationalist Congress party.

This incident is only the latest in a series of attacks on women in India that have sparked outrage. More than 32,000 rape cases were reported in the country in 2017, according to government figures, but the real figure is believed to be much higher.

Last week, a 26-year-old veterinarian in Hyderabad was gang-raped then choked to death. Her body was burned and dumped. Protests were held across the country after the victim’s charred remains were found after her disappearance.

Days later in the state of Bihar, a teenager was allegedly gang-raped and killed before her body was set on fire.

The gang-rape of a lawyer in Jharkhand and the rape and murder of a 6-year-old child in Rajasthan were also reported.

Pressure mounted in parliament to know how the Indian government plans to implement greater protections against sexual violence in India.

“The people want the government to give a proper and definite answer,” said Jaya Bachchan, a member of parliament and former Bollywood actor.

“I know it sounds harsh, but these kinds of people should be brought out in public and lynched,” she said in parliament.

The government has proposed rectifying the issue by introducing the death penalty for rapists, but activists believe rape is a societal issue of misogynistic attitudes.

One Indian film director Daniel Shravan received a wave of condemnation for his response to the Hyderabad rape case. He said, “Rape is not a serious thing, but murder is inexcusable.”

Shravan suggested on social media that “the government should legalize rape without violence for the safety of women.”

The posts, now deleted, told women who are about to be raped to “hand over a condom to the rapist and cooperate with him while he fulfills his sexual desire. That way he will not try to harm you.”

A 2018 Thomson Reuters Foundation report found India to be the most dangerous country for women in the world.