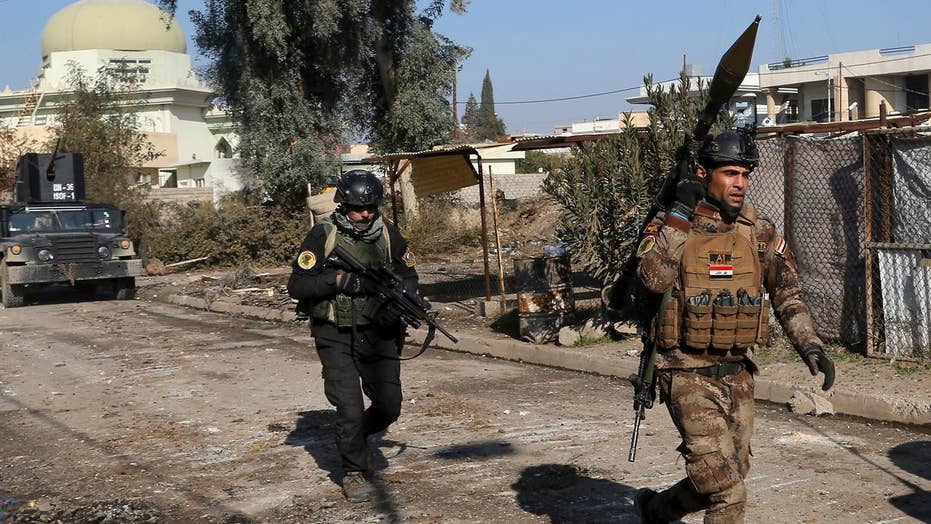 While the world has been focused on the effort to liberate Mosul from ISIS, the barbaric terrorist group has found refuge 100 miles south in the city of Hawija.

According to civilians stuck inside, the situation has become desperate, with those trapped feeling the world has forgotten them. International forces – not to mention world headlines – are focused on Iraq’s second-largest city, ISIS’ headquarters in the embattled nation.

The city lies 160 miles north of Baghdad, and two hours' south of Mosul. (Special to FoxNews.com)

“The government of my country and the media of the world are only interested in Mosul,” a 23-year-old resident named Ahmed told FoxNews.com. “But what is happening here is horrible. Everyone is suffering from shortages of food. There are people dying because of hunger.”

ISIS has been in control of Hawija -- an almost entirely Sunni Muslim, 100,000-person city south of Kirkuk -- since the Iraqi Army withdrew on June 16, 2014. More than 2½ years later, the city is a horror-scape of garbage, sickness and starvation.

The city of Hawija is a bleak landscape of garbage and deserted buildings. (Special to FoxNews.com)

“ISIS started cutting off food supplies six months ago,” Ahmed said. “People eat only bread and eggplant. It’s $40 for a kilo of sugar and $70 for tea, $20 for rice. People cannot afford this. There is no cooking gas. There are no cleaning materials; people clean using the ashes of fire.”

The battle for Mosul has prompted besieged ISIS members to take their rage out on their Hawija captives. In recent weeks, scores of civilians have been executed inside the city on suspicion of working as a “spy” for Iraqi or Kurdish forces, and fighters are sent on suicide missions to kill families suspected of fleeing the city.

At left, bodies of those executed by ISIS lie wrapped in bags and strewn on city streets. At right, a mother washes dishes in dirty water while her child looks on. (Special to FoxNews.com)

The failure to clear Hawija, which lies between Baghdad and Mosul, before taking on ISIS in its stronghold has already proven costly, as Hawija has emerged as a harbor for sleeper cells and a safe haven for militants.

Last week, the governor of Kirkuk, Najmadin Karim, called on the Iraqi government to begin an offensive to rescue Hawija as soon as possible, asserting that it was a “mistake” that the Mosul operation commenced before Hawija was liberated.

“It was a huge mistake from the beginning. Mosul is getting all the attention and it is in slow motion,” one Iraqi intelligence source said, speaking on condition of anonymity. “But officials were in a hurry to announce the Mosul operation before the U.S election and direct attention there.”

Col. John Dorrian, the U.S. Air Force spokesman for Operation Inherent Resolve, said Mosul came first simply because it is “the biggest prize to the enemy.”

“Mosul is the second most populous city in Iraq and it will deeply hurt the enemy when that is taken away,” Dorrian told FoxNews.com. “The longer we allow (ISIS’ hold on Mosul) to exist, the longer the brutal ideology of the group will exist in the world. Hawija is important, but it is not anywhere near as important as Mosul.”

Victory in Mosul is likely many months away, which leaves those caught in the crossfire of Hawija to languish without an end in sight.

“Hawija isn’t a priority for the Iraqi government because it does not have a lot of strategic value,” said Michael Knights, an Iraq-focused military and security affairs strategist at the Washington Institute. “You could run a functional Iraq even if ISIS controls Hawija. Once you take Mosul, ISIS is reduced to a normal-type terrorist movement.”