Commuters ride in the back of a pickup as night falls in San Miguel, El Salvador. It’s a small country both geographically and by population, home to 6.5 million inhabitants. The International Organization for Migration estimates that another 1.35 million Salvadorans live in the United States. (AP Photo/Rebecca Blackwell, File)

The large caravan of migrants, which crossed into Mexico over the weekend, traveled 25 miles on Monday.

It rested Tuesday 45 miles north of the Guatemalan border.

They plan to walk 43 miles on Wednesday.

Many in the caravan, as Fox News previously reported, were suffering from exhaustion, dehydration, heat stroke. Some sought medical attention from local clinics. But the numbers have not waned.

Although most of the 7,000 migrants in the caravan making its way through far-southern Mexico are Hondurans, some Salvadorans also have joined. There is even a Facebook page and a WhatsApp chat encouraging Salvadorans to form a caravan of their own, though it is not yet known whether one will materialize. 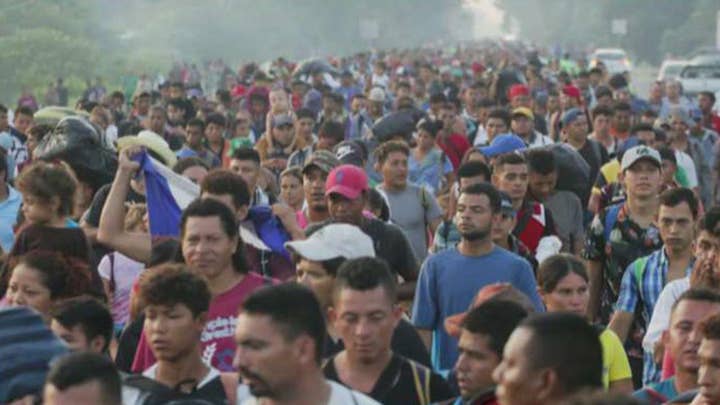 It’s a small country both geographically and by population, home to 6.5 million inhabitants.

El Salvador is the only country in the so-called Northern Triangle —which also includes Guatemala and Honduras —that experienced a reduction in migration in 2017, something that the government has noted in recent days in response to vows by President Trump to cut U.S. aid to the region.

Even so, Salvadorans continue to leave their country. Their tales of hardship back home are not dissimilar from those of their Honduran neighbors.

Suspected members of the 18th Street gang stand handcuffed in pairs at a police station in Panchimalco, near San Salvador, El Salvador. The gangs trace their origins to street life in cities such as Los Angeles, where many Salvadorans sought refuge during their country’s 1980-1992 civil war. (AP Photo/Manu Brabo, File)

The gangs trace their origins to street life in cities such as Los Angeles, where many Salvadorans sought refuge during their country’s 1980-1992 civil war.

Salvadorans arrested for crimes in the U.S. were deported back home, bringing gang activity with them. 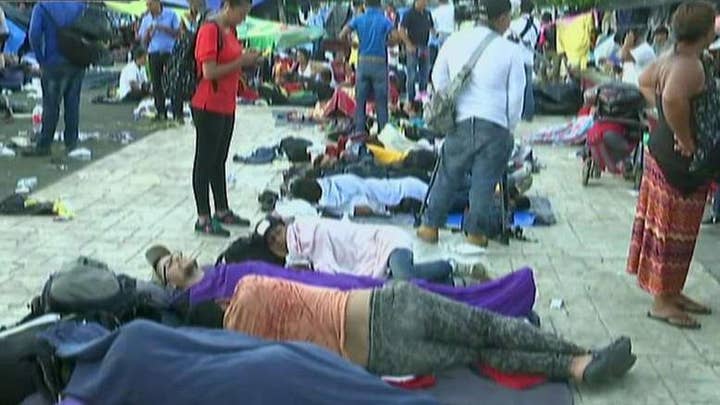 Trump frequently seizes on MS-13 as a reason to tighten immigration controls.

A quarter of young Salvadorans who flee do so because they are threatened with or fear violence. Young women are pressured to be “girlfriends” of gang members and face rape or murder if they refuse, while young men are pressured to join the gangs or risk death if they don’t. Two out of three Salvadorans never attend high school.

Young women are particularly vulnerable. Murders of young women peaked at 574 in 2015. Salvadoran law forbids termination of pregnancies, even in the case of rape, and establishes long prison sentences for abortion.

Relatives of a Mara Salvatrucha gang member retrieve his body from a steep gully after he was shot dead in a confrontation with police, in Olocuilta, El Salvador. Two bodies were found at the bottom of the gully following a shootout that began near an old cattle stable, which gang members had turned into a shooting range. El Salvador’s homicide rate was 60 per 100,000 inhabitants last year, down from a grisly record of 102 homicides per 100,000 inhabitants in 2015 but still among the highest in the world. (AP Photo/Manu Brabo, File)

The International Organization for Migration said most Salvadorans migrate for economic reasons. Per capita income is $324 a month, and nearly one in three Salvadorans lives in poverty, according to the World Bank, defined as less than $5.50 a day.

Many rely on remittances from family members abroad.

It’s tough to make a go as a small business owner in the country and create jobs for others.

The gangs extort local businesses with impunity, and corruption is rampant. President Salvador Sanchez Ceren’s three predecessors were all prosecuted for alleged graft.

“Migration problems are structural problems of the country,” said Cesar Rios, director of the Salvadoran Migrant Institute. “If steady income is not guaranteed here — work and security — then people will continue to leave.”

Fox News’ William La Jeunesse and The Associated Press contributed to this report.