Mayor of London Sadiq Khan, front center, holds a klaxon horn, as he joins protesters in the People's Vote March for the Future, in London, Saturday Oct. 20, 2018. Some thousands of protesters are marching through central London, Saturday, to demand a new referendum on Britain’s Brexit departure from the European Union. (Yui Mok/PA via AP)

Thousands of protesters descended on the streets of London on Saturday to demand a new referendum on Britain’s decision to leave the European Union.

The organizers of the anti-Brexit march, dubbed as People’s Vote March, urge the government to hold a second referendum, saying that the public deserves to have a final say in the light of new facts and information concerning what leaving the EU entails.

“This week's fresh chaos and confusion over Brexit negotiations has exposed how even the best deal now available will be a bad one for Britain,” said Lord Andrew Adonis, an opposition Labour Party member of the House of Lords. “Voters will neither forgive nor forget if [lawmakers] allow this miserable Brexit to proceed without people being given the final say,” he added.

An anti-Brexit campaigner dressed as Theresa May waves European Union flags during the People's Vote March for the Future in London, a march and rally in support of a second EU referendum, in London, Saturday Oct. 20, 2018. Thousands of protesters gathered in central London on Saturday to call for a second referendum on Britain’s exit from the European Union. (Yui Mok/PA via AP)

Protesters were seen carrying the EU flag and signs criticizing Prime Minister Theresa May of the Conservative Party.

“Stop Tory Brexit, Free Movement For All” read one sign in reference to the EU immigration policies that let anyone from the union to come to Britain. “I'm 16, Brexit stole my future!” read another placard.

The campaigners boast that nearly 600,000 are attending the march, though it’s unclear how they arrived to such number.

Thousands of activists were brought from outside London thanks to donations from many British celebrities who footed the bill, the Independent reported.

The protest also attracted a number of high-profile figures, including London Mayor Sadiq Khan who will speak at the event. He opposed the campaign to leave the EU in 2016 and now advocates for another referendum.

Some social media called out several over-the-top signs, including one that said “Hitler would be proud of this Brexit.”

"UK now in so much trouble govermment appointed Suicide Minister! Don't top yourself..." read another controversial sign, drawing widespread condemnation. The organizers tweeted that the sign wasn't sanctioned by them.

The Brexit campaign won the 2016 referendum 52 percent to 48 percent. The government has ruled out holding another vote on the subject.

May’s cabinet recently reached an agreement on Britain’s future relationship with the union, though the agreement still faces a showdown in a Parliament vote as it reportedly alienates both supporters of the EU and those advocating for a withdrawal. 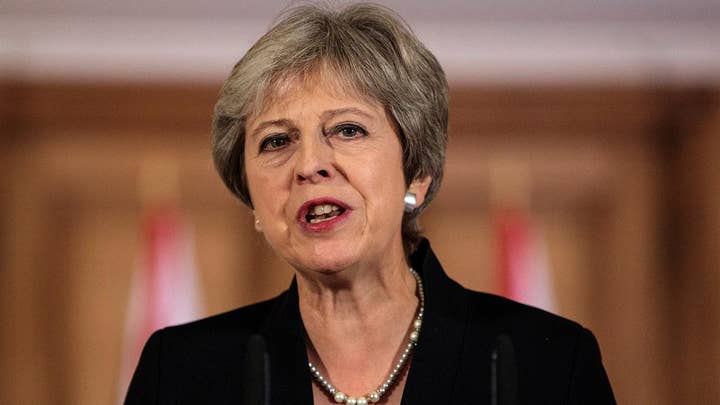 Britain will officially be leaving the EU on March 29, but it still remains unclear on what kind of terms as negotiations has been overwhelmed by internal disagreements in the UK.

The inability to come up with an agreement is raising fears that the UK is facing a “no-deal” Brexit that could negatively impact the economy and create confusion among millions of EU citizens already residing in the country.