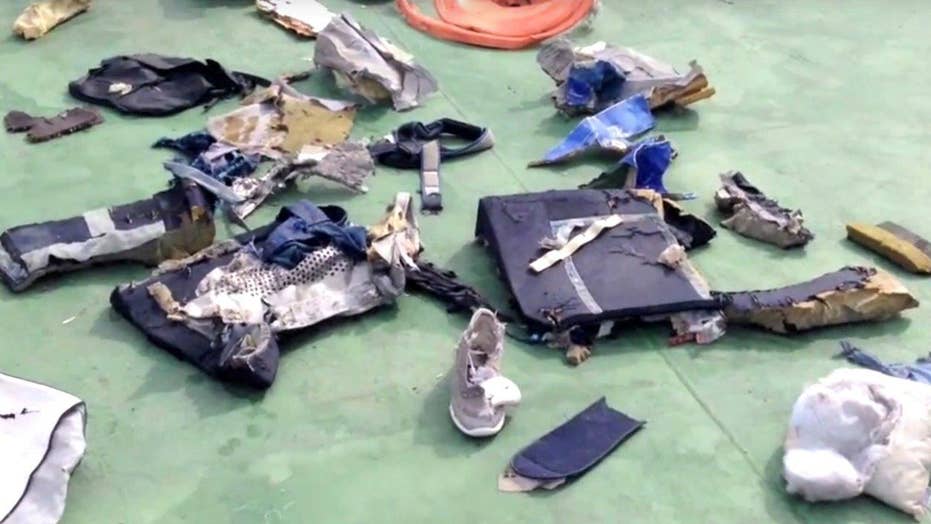 Conflicting claims over what brought down EgyptAir plane

Meanwhile, a U.S. official briefed on the latest intelligence told Fox News, "All signs continue to point to terrorism."

The official who spoke to the AP claimed he personally examined the remains of some of the plane's 66 passengers and crew at a Cairo morgue. He said all 80 pieces brought to Cairo so far are small and that "there isn't even a whole body part, like an arm or a head."

He added that at least one part of an arm had signs of burns -- an indication it might have "belonged to a passenger sitting next to the explosion."

The U.S. official speaking to Fox News said American satellites could have missed a potential explosion over the eastern Mediterranean. "Contrary to popular belief, we cannot see every part of the earth all the time."

The official said most U.S. satellites would be trained to positons on land and known areas of interest and not focused over an empty part of the sea, particularly the eastern Mediterranean.

The official would not rule out an explosion took place. To date, no terrorist group has claimed responsibility for the EgyptAir disaster.

The Airbus A320 crashed early Thursday morning near the end of a fight from Paris to Cairo.

An independent Cairo newspaper, al-Watan, quoted an unnamed forensics official Tuesday as saying the plane blew up in midair, but that it was unclear whether the blast was caused by the an explosive device or something else. The official also said the remains retrieved so far are "no larger than the size of a hand."

"Everything published about this matter is completely false, and mere assumptions that did not come from the Forensics Authority," MENA quoted Hesham Abdelhamid as saying.

Analysts who spoke to Fox News also said the body parts could have been broken up in a similar way upon impact with water.

Family members of the victims arrived Tuesday at a Cairo morgue’s forensics department to give DNA samples to help identify the remains of their kin, a security official said. The official also spoke on condition of anonymity because he was not authorized to talk to reporters.

An international effort to hunt for the plane's cockpit voice and data recorder resumed Tuesday, with ships and planes from Britain, Cyprus, France, Greece and the United States taking part in the search.

The search area is roughly halfway between Egypt's coastal city of Alexandria and the Greek island of Crete, where the water is 8,000 to 10,000 feet deep.

The head of Egypt's state-run provider of air navigation services, Ehab Azmy, told The Associated Press Monday that the plane did not swerve or lose altitude before it disappeared off radar, challenging an earlier account by Greece's defense minister.

Azmy, head of the National Air Navigation Services Company, said that in the minutes before the plane disappeared, it was flying at its normal altitude of 37,000 feet, according to the radar reading. "That fact degrades what the Greeks are saying about the aircraft suddenly losing altitude before it vanished from radar," he added.

"There was no turning to the right or left, and it was fine when it entered Egypt's FIR (flight information region), which took nearly a minute or two before it disappeared," Azmy said.

Greece's defense minister, Panos Kammenos, had said the plane swerved wildly and dropped to 10,000 feet before it fell off radar.

Greek civil aviation authorities said the flight appeared normal until air traffic controllers were to hand it over to their Egyptian counterparts. The pilot did not respond to their calls, and then the plane vanished from radars.

It was not immediately possible to explain the discrepancy between the Greek and Egyptian accounts of the air disaster.

A 2013 report by the Egyptian ministry of civil aviation records that the Airbus 320 in the crash made an emergency landing in Cairo that year, shortly after taking off on its way to Istanbul, when one of the engines "overheated."

It said that the EgyptAir A320 GCC took off from Cairo airport heading to Istanbul at 2:53 and that when it reached an altitude of 24,000 feet, the pilot noticed that one engine had overheated. A warning message appeared on the screen reading, "engine number 1 stall." After checking on best measures to take, the pilot headed back to Cairo’s airport where a maintenance engineer inspected the engine, disconnected it, and sent it to be repaired.

There were no injuries, no fire, and no damage to the plane, the report read, adding that the engine had a technical problem.

The report is one of over 60 reports classified by the ministry as incidents, serious incidents and accidents that took place between 2011 and 2014. Among them, 20 involved A320 Airbus planes, the highest among any other aircraft.

Experts contacted by AP said that while an overheated engine is not a common problem, it is unlikely to cause a crash.

David Learmount, a widely respected aviation expert and editor of the authoritative Flightglobal magazine, said, "engine overheat is rare but it happens."

He said that the pilot can shut down the engine and aircrafts can operate with a single engine.

"I don't think engine overheat alone has ever caused an aircraft to crash. An engine fire could cause a crash but has not done so in the modern aviation era," he added.