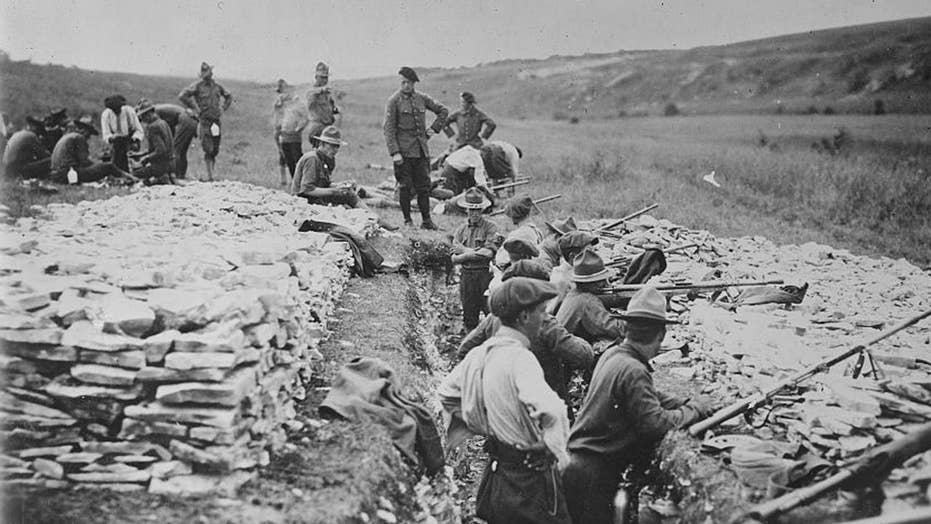 US marks WWI centennial: What lessons can be applied today?

On July 28, 1914, after the assassination of Archduke Ferdinand, Austria-Hungary declared war on Serbia, starting The Great War.  It would take almost three years for the United States to take up arms in the fight.

When the U.S. joined the battle, the war -- and the world -- changed forever.

“America’s role in what was then the world’s bloodiest and most destructive war signaled the emergence of the U.S. as the arbiter of a new world order,” wrote Arthur Herman, a senior fellow with the Hudson Institute, an independent research organization based in Washington. “One that would be built around America’s economic strength, military power and moral authority as promoter and defender of democracy and freedom.”

Many historians believe that the end of World War II marked the beginning of America as the center of the world order. Herman disagrees, writing, “In fact, it was World War I — starting with the economic and financial might the U.S. acquired during the war as Wall Street replaced London as the center of world finance, and growing as U.S. economic power was deployed to feed and then rebuild a shattered post-war Europe, including Germany and even Soviet Russia.”

“The U.S. really emerged as a superpower at the end of World War I,” Herman told Fox News. “President [Woodrow] Wilson gave the U.S. a moral authority it never quite lost.”

At the outbreak of the war, Wilson adopted a policy of neutrality, urging all Americans to remain “impartial in thought as well as in action.”

Wilson clung to the doctrine even as the conflict metastacized. Germany declared war on Russia and France. Britain and Japan declared war on Germany. Turkey would side with the Germans, causing Russia, Britain and France to declare war on Turkey. Still, Americans agreed with the President that remaining neutral was the best option for our country.

That public opinion would change after an even that claimed the lives of hundreds of Americans.

In 1915, as the United States continued to use shipping lanes into Europe, Germany had declared the waters around the British Isles to be a war zone and began ordering U-boats to sink commercial and even some passenger ships. On May 7, the Lusitania, a British ocean liner travelling from New York to England with hundreds of American passengers onboard, was sunk by Germany. Nearly 1,200 people, including 128 Americans, were killed. This caused a public outcry across the globe, but especially in the states.

Still, it would take almost two more years and the sinking of more merchant ships for Wilson to decide to end America’s policy of neutrality.

Wilson appeared before Congress on April 2, 1917, to call for a declaration of war. The U.S. officially entered the battle just four days later.

The United States would remain in the deadly conflict for a year and a half. After the deaths of some 17 million people, at the eleventh-hour, on the 11th day of the 11th month of 1918, World War I ended. It was this timing that led to Veterans Day being observed on Nov. 11.

Herman notes that even though it was a century ago, soldiers who died there still deserve their moment of remembrance.

“In less than 2 years, over 110,000 [Americans] died in World War I,  a war in which our president said we are doing this for others and not for ourselves, to become the beacon of progress," he said. "That is real sacrifice.”