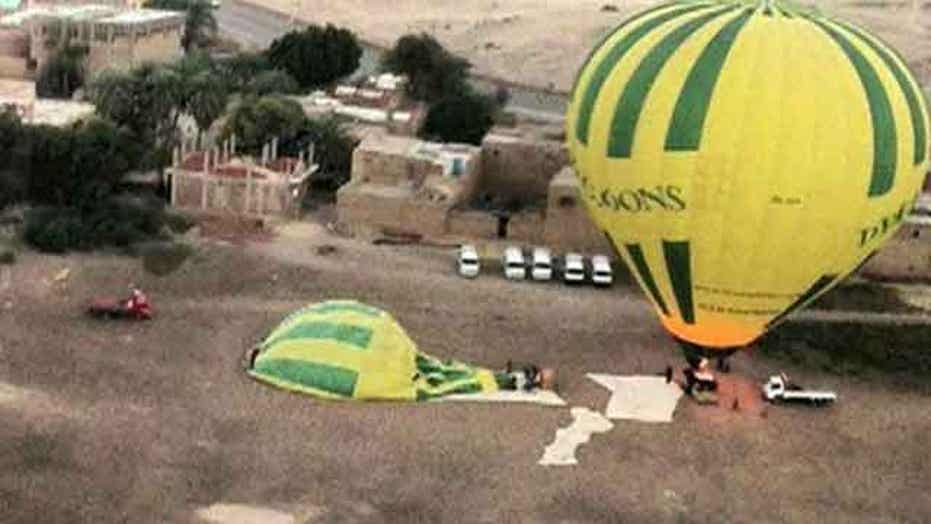 It was one of the worst accidents involving tourists in Egypt and likely to push the key tourism industry deeper into recession.

Three initial survivors of the crash -- two British tourists and one Egyptian -- were taken to a local hospital. But one of the British tourists later died of his injuries. British tour operator Thomas Cook confirmed that the tourist died in the hospital, while state radio reported that the Egyptian has severe burns on his body.

According to the Egyptian security official, the balloon -- carrying at least 20 tourists -- was flying over Luxor early Tuesday when it caught fire, which triggered an explosion in its gas canister, then plunged at least 1,000 feet from the sky.

It then crashed into a sugar cane field outside al-Dhabaa village just west of Luxor, 320 miles south of Cairo, said the official, speaking on condition of anonymity because he was not authorized to talk to the media.

Bodies of the dead tourists were scattered across the field around the remnants of the balloon. The security official said foul play has been ruled out.

An official with the state prosecutor's office said initial findings show that the accident occurred when the pilot's landing cable was caught around a helium tube. He spoke anonymously because the investigation is ongoing.

The head of Japan Travel Bureau's Egypt branch, Atsushi Imaeda, confirmed that four Japanese died in the crash. He said two were a couple in their 60s from Tokyo. Details on the other two were not immediately available.

In Hong Kong, a travel agency said nine of the tourists that were aboard the balloon were natives of the semiautonomous Chinese city. There was a "very big chance that all nine have perished," said Raymond Ng, a spokesman for the agency. The nine, he said, included five women and four men from three families.

They were traveling with six other Hong Kong residents on a 10-day tour of Egypt.

Ng said an escort of the nine tourists watched the balloon from the ground catching fire around 7 a.m. and plunging to the ground two minutes later.

In Britain, tour operator Thomas Cook confirmed that three British tourists were among the dead.

"What happened in Luxor this morning is a terrible tragedy and the thoughts of everyone in Thomas Cook are with our guests, their family and friends," said Peter Fankhauser, CEO of Thomas Cook UK & Continental Europe.

Speaking on condition of anonymity because he wasn't authorized to be publicly named according to government policy, the official said French authorities were working with their Egyptian counterparts to clarify what happened. French media reports said two French tourists were among the dead but the official wouldn't confirm that.

Hot air ballooning, usually at sunrise over the famed Karnak and Luxor temples as well as the Valley of the Kings, is a popular pastime for tourists visiting the area. Tickets for a hot air balloon ride per person are around 200 Egyptian pounds, or roughly $30.

Egypt's tourism industry has been decimated since the 2011 uprising and the political turmoil that followed and continues to this day. Luxor's hotels are currently about 25 percent full in what is supposed to be the peak of the winter season.

Scared off by the turmoil and tenuous security following the uprising, the number of tourists coming to Egypt fell to 9.8 million in 2011 from 14.7 million the year before, and revenues plunged 30 percent to $8.8 billion.

Magda Fawzi, whose company operates four luxury Nile River cruise boats to Luxor, said she expects the accident will lead to tourist cancellations. Tour guide Hadi Salama said he expects Tuesday's accident to hurt the eight hot air balloon companies operating in Luxor, but that it may not directly affect tourism to the Nile Valley city.

Poverty swelled at the country's fastest rate in Luxor, which is highly dependent on visitors to its monumental temples and the tombs of King Tutankhamun and other pharaohs. In 2011, 39 percent of its population lived on less than $1 a day, compared to 18 percent in 2009, according to government figures.

In August, Egypt's Islamist President Mohammed Morsi flew to Luxor to encourage tourism there, about a month after he took office and vowed that Egypt was safe for tourists.

"Egypt is safer than before, and is open for all," he said in remarks carried by the official MENA news agency at the time. He was referring to the security situation following the 2011 ouster of autocratic leader Hosni Mubarak.

Deadly accidents caused by poor management and a decrepit infrastructure have taken place since Morsi took office. In January, 19 Egyptian conscripts died when their rickety train jumped the track. In November, 49 kindergarteners were killed when their school bus crashed into a speeding train because the railway guard failed to close the crossing.

The Muslim Brotherhood, Egypt's most powerful political force and Morsi's base of support, blames accidents on a culture of negligence fostered by Mubarak.