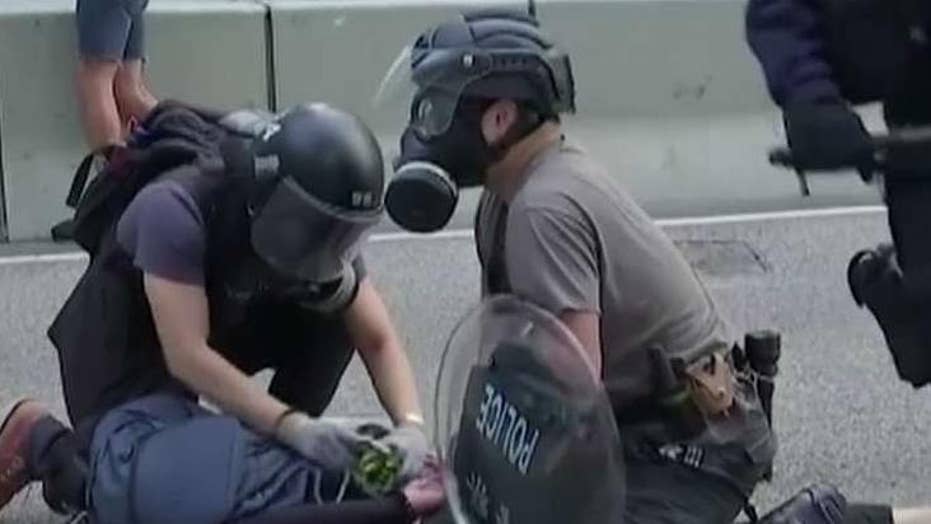 Violence escalates in Hong Kong protests at a university

As clashes continue to bring chaos to the streets of Hong Kong, with protesters setting fires and slinging arrows, Chinese soldiers were seen arming themselves with brooms over the weekend for the massive cleanup of debris from city streets.

A police officer in Hong Kong was struck in the leg with an arrow on Sunday as another day of violent clashes erupted between pro-democracy protesters who blocked a major road tunnel under the city's harbor and occupied a university campus and police, who deployed tear gas and projectiles.

After holding their ground for most of the day with gasoline bombs, bricks and nails strewn on area roadways, protesters began retreating into Hong Kong Polytechnic University near sunset, fearing they would be trapped as police fired tear gas volleys and approached from the opposite direction.

A fire burns on a bridge occupied by protestors over a highway leading to the Cross Harbour Tunnel in Hong Kong, Sunday, Nov. 17, 2019. (AP Photo/Kin Cheung)

Fires were set to bridges leading to Polytechnic as protesters tried to keep police from advancing on their campus stronghold. Orange flames extended the length of a footbridge over the roadway entrance to the Cross-Harbour Tunnel.

Police had shut down access to the area and massed earlier Sunday in an apparent attempt to surround protesters. Some retreated inside the campus, while others remained outside to deter any advance.

Protestors hurled Molotov cocktails as armored police vehicles approach their barricades on the bridge over the highway, causing one of the vehicles to catch fire and others to reverse away.

Protestors hurl molotov cocktails as armored police vehicles approach their barricades on a bridge over a highway leading to the Cross Harbour Tunnel in Hong Kong, on Sunday. (AP Photo/Kin Cheung)

State Department spokesperson Morgan Ortagus said Sunday on "Fox & Friends" the images coming out of Hong Kong on Sunday were "certainly troubling," and said that China should honor its commitments as it relates to Hong Kong.

An armored police vehicle catches fire after being hit by molotov cocktails thrown by protestors, at right, on a bridge over a highway leading to the Cross Harbour Tunnel in Hong Kong, Sunday, Nov. 17, 2019. (AP Photo/Kin Cheung)

"We think that there needs to be a dialogue between the government of Hong Kong and it's citizens," Ortagus said. "We're certainly calling for a peaceful resolution and for peaceful protests."

Hong Kong Police said the officer from the media liaison team was struck in the leg by an arrow around 2 p.m. and taken to an area hospital. Photos on the department’s Facebook page show the arrow sticking out of the back of the officer’s lower leg through his pants.

Another officer's visor was struck by a metal ball, though he was not injured, according to the Hong Kong Free Press.

“Police warn that the violent activities in the Hong Kong Polytechnic University have escalated to rioting," police said in a statement to the news outlet, "Anyone who stays behind or assists rioters may be liable to the offense of ‘Taking Part in a Riot’," which could land someone up to 10 years in jail.

The use of bows and arrows, along with gasoline bombs launched with catapults, threatened to escalate the violence in the more than five-months-long anti-government movement. Protesters are trying to keep the pressure on Hong Kong leaders for full democracy for the territory, who have rejected most of their demands.

After a week of occupations at several major campuses in the last week, protesters have mainly converged on Sunday at Polytechnic, blocking access to one of the three main road tunnels that link Hong Kong Island with the rest of the city.

A large group of protesters tossed bricks in the blocked main thoroughfare in the Mongkok district, as they also deployed makeshift roadblocks to prevent vehicles from getting through.

Police responded by shooting tear gas at protesters and deploying water cannons that stream blue-dyed water to drench protesters. By later in the day, authorities deployed an armored truck identified as a "Long Range Acoustic Device” that a reporter said sounded like a "loud, shrill noise" similar to a car alarm.

Police told the Hong Kong Free Press that the LRAD was deployed to "convey important messages over a long range in a noisy environment."

“Unlike what is said in individual media reports, the LRAD does not generate ultra-low frequency which will cause dizziness, nausea or loss of sense of direction," the force told the news outlet.

Sunday’s daytime faceoff came after a pitched battle at night in which the two sides exchanged tear gas and gasoline bombs that left fires blazing in the street. Many protesters retreated inside the Polytechnic campus, where they have barricaded entrances and set up narrow access control points.

On Saturday, Chinese Army troops stationed in Hong Kong appeared to clean up the streets, which protesters had strewn with debris to slow down any police advances while they had been on the campus. The People's Liberation Army (PLA) soldiers,  dressed in black shorts and olive drab T-shirts, joined the clean-up outside Hong Kong Baptist University, the site of clashes earlier in the week.

The soldiers, jogging in formation, carrying brooms and singing in cadence, were a rare sight on the streets of the city.

China maintains a garrison of about 10,000 soldiers, but they can't operationally deploy in the city without a request from the Hong Kong government. The government said that it had not requested the military’s assistance, describing it as a "voluntary community activity."

The protests, which began over a proposal to allow extraditions to mainland China, have been ongoing for months; retired Major General Vinny Boles provides insight.

The dozens of troops from nearby barracks, alongside firefighters and citizens, helped street cleaners and picked up paving stones, rocks and other obstacles that had cluttered the street and prevented traffic from flowing. Hong Kong riot police kept watch from nearby streets.

Soldiers from the PLA have been seen on the streets only once since the former British colony was handed back to China in 1997, to clean up from a typhoon in 2018, according to Sky News.

Opposition lawmakers criticized the Chinese military for joining a cleanup to remove debris from streets near Hong Kong Baptist University on Saturday.

An armored police vehicle catches fire after being hit by Molotov cocktails thrown by protesters in Hong Kong on Sunday. (AP Photo/Kin Cheung)

The Education Bureau announced that classes from kindergarten to high school would be suspended again on Monday because of safety concerns. Classes have been canceled since Thursday after the bureau came under criticism for not doing so earlier.