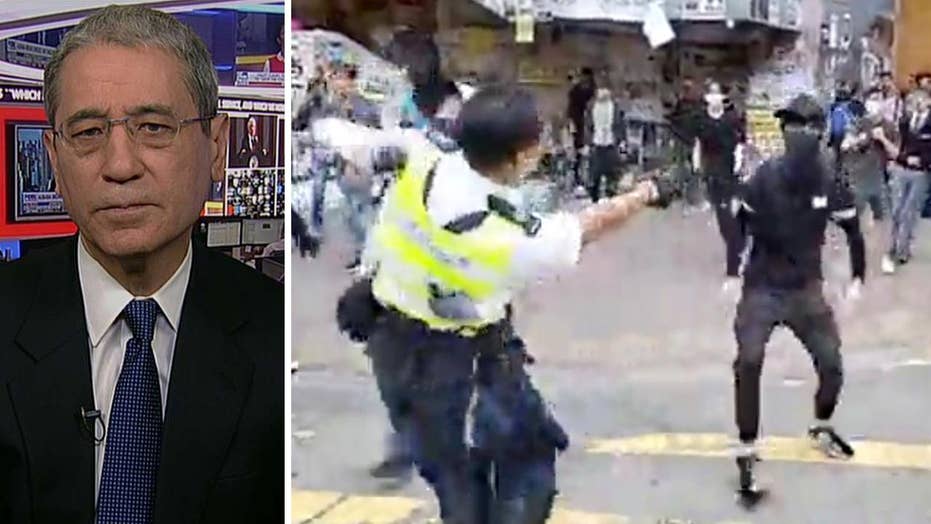 The video, which was posted on Facebook by online video outlet Cupid Producer, showed a police officer collaring one protester and then seemingly shooting another who approached.

The officer was seen in the video firing again as a third protester approached. Police said one protester was hit and has undergone surgery. The wounded protester, 21, was in stable condition, Reuters reported.

A still image from video showed a police officer aiming his gun as a protester in Hong Kong on Monday morning. (Cupid Producers via Reuters)

The video ended with two officers kneeling over two protesters on the ground.

The condition of the second protester seen on the ground was not immediately known.

The shooting unfolded in a crosswalk at a large intersection with scattered debris that had backed up traffic as protestors blocked subway lines and intersections around the city during the morning commute. A fire had been set inside a train at Kwai Fong station and service had been suspended at several stations, public broadcaster RTHK reported.

Police, who had stood accused of shooting protesters in previous demonstrations, alleged opened fire Monday on the eastern side of Hong Kong island, Reuters reported, citing Cable TV and other Hong Kong media. Police also reportedly pepper-sprayed and subdued a woman nearby as plastic crates were thrown at officers.

The video, which was posted on Facebook by online video outlet Cupid Producer, showed a police officer collaring one protester and then shooting another who approached. (Cupid Producers via Reuters)

Police later fired tear gas in the same area where the protester was shot, Reuters reported citing a witness.

Police reportedly said in a statement that protesters needed to "stop their illegal acts immediately." The police did not immediately comment on Monday's shooting.

An office worker nearby said, "When I arrived, the road was blocked and people were yelling at the police, calling them murderers."

The shooting unfolded one day after police fired tear gas and protesters broke windows at a shopping mall amid anger over a student activist's death and the arrests of pro-democracy lawmakers.

Alex Chow, 22, a computer science undergraduate from the Hong Kong University of Science and Technology, died Friday, four days after he fell from a ledge of a car park as police tried to clear the area, the BBC reported. Chow's death triggered impromptu demonstrations and vigils from pro-democracy activists, while also setting the stage for additional protests through the weekend.

Demonstrations began in Hong Kong in June over a proposed extradition law and have expanded to include demands for greater democracy and police accountability. Activists have complained the government was undermining the autonomy and Western-style civil liberties promised when the former British colony was returned to China 22 years ago. 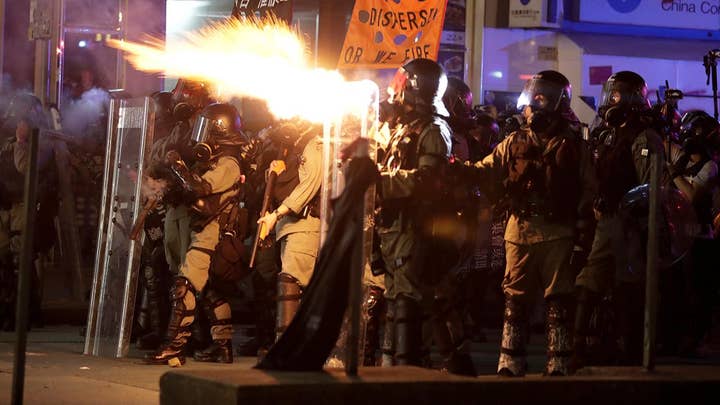 Hong Kong has been preparing for district council elections viewed as a measure of public sentiment toward the government, scheduled for later this month. Pro-democracy lawmakers have claimed the government was trying to stir up violence to justify canceling or postponing the elections.

Fox News’ David Aaro and The Associated Press contributed to this report.