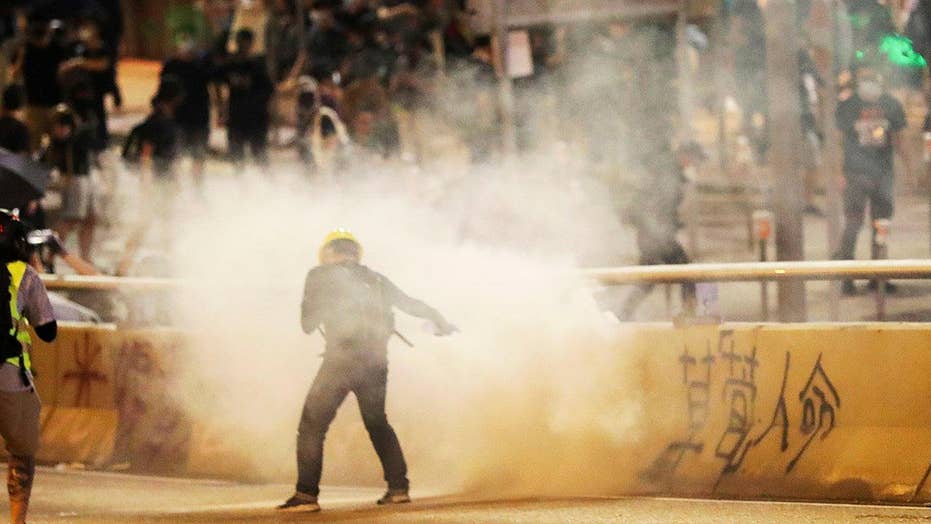 A pro-democracy protest in Hong Kong which reportedly had drawn hundreds of thousands ended early on Saturday after violence broke out, police said.

Protesters lobbed bricks and Molotov cocktails at government buildings while police responded by firing tear gas and water cannons into the crowds. Police said “radical protesters” lobbed gasoline bombs and damaged property outside the government offices, and aimed laser beams at a helicopter, posing “a serious threat to everyone” in the area.

Protests calling for democratic reforms have become an almost weekly occurrence since early June. Organizers said 200,000-300,000 turned out for Saturday’s protests, though police did not give a definitive number.

Saturday's demonstration took place three days before the 70th anniversary of the People’s Republic of China, which has led to fear of bloody clashes in the midst of Beijing’s celebrations. The rally was called to mark the fifth anniversary of the 2014 Umbrella Movement, in which protesters occupied key thoroughfares in the downtown area for 79 days beginning Sept. 28 to demand direct elections for the city's leaders but failed to win any government concessions.

More than 1,000 of the protesters streamed onto a main road, with some veering off to target the government buildings. Police initially used a hose to fire pepper spray when some protesters began throwing bricks. Police later used a water cannon truck to fire a blue liquid, used to identify protesters, and fired tear gas after protesters lobbed gasoline bombs through the barriers.

We think we will lose because their force is so strong,” said 22-year-old demonstrator Sang Chan. “But if we don’t do anything now, we’ll have no other chance.”

Some protesters stomped on images of Chinese President Xi Jinping and Hong Kong leader Carrie Lam. At one of the gates to Lam's office, the Chinese word for "hell" and an arrow pointing to the building were spray-painted on the sidewalk.

A medic treats a pro-Beijing demonstrator after he was hit by protesters Saturday. (AP Photo/Vincent Yu)

Protest organizers are planning “anti-totalitarianism” rallies on Sunday in Hong Kong and more than 60 other cities worldwide to denounce what they call “Chinese tyranny.” However, the government's biggest worry could come Tuesday,  when protesters are planning a major march as China's ruling Communist Party marks its 70th year in power with grand festivities in Beijing. Police have banned the march, though that’s unlikely to deter protesters. Pro-Beijing demonstrators have also vowed to come out.

“They are not our children,” China supporter Yau Mei-kwang told Reuters of the activists. “Because at this age, they should be studying, not running to the airport, hitting people, hitting the police, insulting people. That is not right.”

A protester who went by the name of Wong defended the use of violence to Reuters. “We know that they will not listen if we rally in peace because we are not on the same level.”

Hong Kong was returned to China from Great Britain in 1997 under the promise of a "one country, two systems" government which would guarantee residents certain civil liberties not afforded to those in mainland China. Protesters believe China is encroaching on those rights, and have called on Britain and the United States to rein in Beijing.