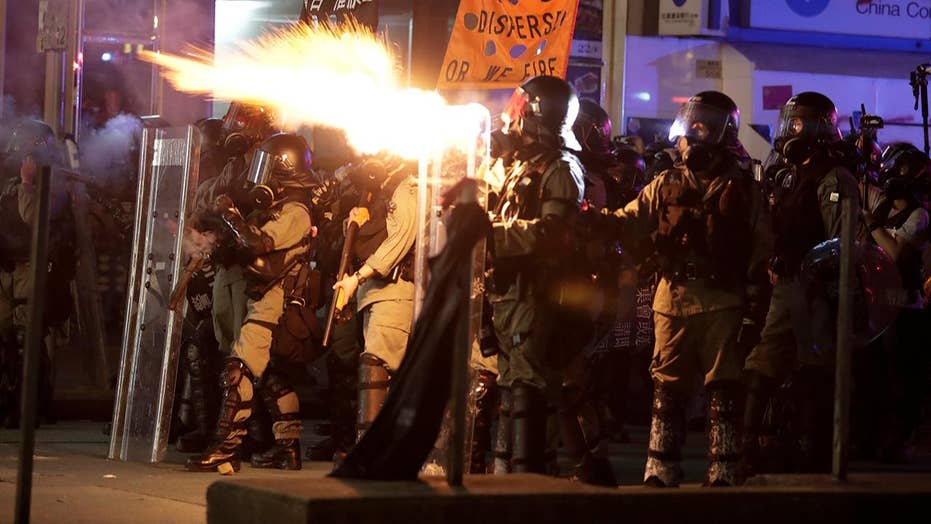 Republican Sen. Josh Hawley describes what he saw during his recent visit to Hong Kong.

A pro-Beijing Hong Kong lawmaker out campaigning on Wednesday was stabbed by an anti-government protester, marking the latest escalation of violence surrounding the demonstrations that began over the summer demanding political reforms in the semi-autonomous Chinese territory.

Junius Ho, who is despised by protesters because of his alleged links to violent attacks on demonstrators, was out on the street campaigning for local elections when he was approached by another man on Wednesday.

In a video obtained by the South China Morning Post, the man gives flowers to Ho and asks permission to take a photo with him. He then can be heard saying, "Let me take out my mobile phone, OK?"

The man then draws a knife from his bag, stabbing Ho in the chest before he is quickly overpowered by the lawmaker and others.

The man kept hurling abusive comments at Ho, calling him "human scum" until he was detained and arrested by police.

After receiving initial medical treatment, Ho told reporters the knife had been blocked by his rib cage and that he was left with a minor 0.79-inch-deep wound. In a video posted Wednesday afternoon, Ho said he has received death threats since July, and that two of his colleagues sustained hand and arm injuries trying to protect him.

“This morning is a dark day in Hong Kong's district council elections. A candidate was intentionally assaulted by an attacker. There is no order in elections left,” he said in a statement to the South China Morning Post. "Although the election atmosphere is already unfair and has lost its order, I will remain courageous and fearless.”

Ho has been targeted by anti-government protesters since July 21, when armed masked men in white T-shirts violently attacked demonstrators and passengers at a subway station in northern Yuen Long, injuring 45 people. Ho was seen shaking hands with some of the attackers that night.

The lawmaker denied colluding with gangs, claiming he bumped into the men after dinner and thanked them for "defending their homes," but that he didn't know about their brutal attack until later.

The attack on Ho has sparked concerns that the polls may be postponed. The city's biggest pro-establishment party voiced renewed concerns over safety, saying there were 150 incidents of their candidates being harassed and their offices vandalized in the last month, local media reported.

Pro-democracy students hold up their hands representing five demands at the University of Hong Kong, Wednesday, Nov. 6, 2019, as they rally against police brutality. (AP Photo/Kin Cheung)

In addition to the attack on Ho, there have also been incidents involving pro-democracy figures. On Sunday night, a knife-wielding man bit off part of the ear of district councilor Andrew Chiu and slashed two people.

At a news conference on Wednesday in Beijing to wrap up her visit to mainland China, Hong Kong's embattled leader, Carrie Lam, condemned the attack on Ho and said she was concerned over rising public proclivity for violence.

Protesters in Hong Kong speak to Fox News' Greg Palkot on their decision to defy the government and wear face masks on the streets.

"How can protesters carrying out violent acts claim to be pursuing freedom and democracy? Their every move challenges the freedom and violates the rights of the majority of the Hong Kong people," she said.

Lam, who met with President Xi Jinping in Shanghai on Monday, said she was grateful for support from Chinese leadership during her trip and pledged to strictly enforce the law to restore order.

China's foreign ministry recently dismissed a report that said Beijing planned to replace Lam next year. But the ruling Communist Party said Tuesday that it would "perfect" the system of appointing and dismissing Hong Kong's leader and top officials.