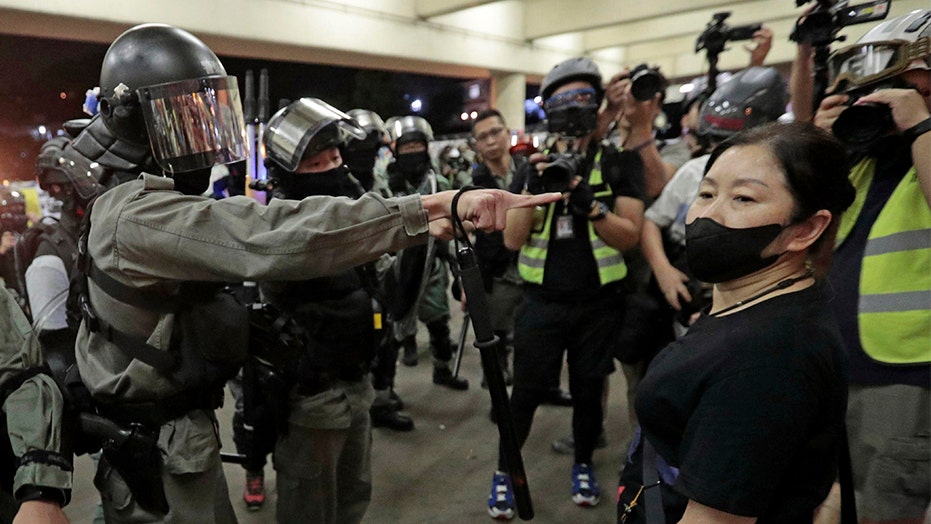 Jonathan Hunt reports on the long, violent and difficult week for Hong Kong and the first election since protests began

A Hong Kong court has flip-flopped – at least temporarily – on its decision earlier this week to strike down a government ban on wearing face masks, which demonstrators have been using to help avoid capture by police.

The move comes as the city’s new police commissioner, Tang Ping-keung, told reporters that police would be out in force at polling stations for Sunday’s local elections to respond to any outbreak of violence “without hesitation.”

Police in riot gear ask a woman to take off her mask outside a train station in Hong Kong, on Nov. 3. (AP)

Yet on Friday, following an appeal from the government to freeze the ruling, the court agreed to grant a one-week suspension in view of the “highly exceptional circumstances that Hong Kong is currently facing," local broadcaster RTHK reported.

Many Hong Kong protesters have defied the ban, and during lunchtime rallies Friday, some chanted “We have the right to wear masks."

The developments come as the number of protesters occupying the besieged Hong Kong Polytechnic University campus is dwindling.

A protester hugs a social worker inside the campus of Hong Kong Polytechnic University in Hong Kong Friday, Nov. 22, 2019. Most of the protesters who took over the university last week have left, but an unknown number have remained inside for days, hoping somehow to avoid arrest. (AP Photo/Achmad Ibrahim)

Six masked protesters surrendered to police before dawn Friday, bringing to about 30 the number that has come out from the university in the past day.

The group emerged from a campus entrance and held hands as they walked toward a checkpoint around 3 a.m. Five protesters wore the black clothing favored by the protest movement and one was in a blue checked shirt.

Protesters walk inside the campus of Polytechnic University in Hong Kong on Friday. Most of the protesters who took over the university last week have left, but an unknown number have remained inside for days, hoping somehow to avoid arrest. (AP)

Most of the protesters who took over Hong Kong Polytechnic University last week have left, but an unknown number remained inside for days, hoping somehow to avoid arrest.

Tang Chun-Keung, head of the Hong Kong Association of the Heads of Secondary Schools, said the holdouts include minors, numbering less than 10, and they are emotionally unstable. Tang entered the campus Friday with some others but failed to find them.

“We have lawyers and social workers ready to provide assistance and we hope to persuade them to leave the campus. We are worried our work is getting more and more difficult because students are refusing to meet us,” he told reporters.

Police chief Tang reiterated that those under 18 can leave, although they may face charges later, and pledged impartial treatment for all adults facing arrest.

“The condition is deteriorating and dangerous, there are many explosives and petrol bombs inside ... we hope to end the matter peacefully,” he said, adding police didn’t set any deadline to end the standoff.